What You Need to Know About Obon: Japan’s Festival of the Dead

A comprehensive guide to the August Obon festivities, from rituals to regional matsuri

If there’s one thing that bridges cultures, it’s the honoring of those that have passed; Día de los Muertos in Latin America, Pchum Ben in Cambodia and Obon in Japan. Along with Tanabata, Obon is a staple of summer festivities and one of the three big Japanese holidays along with New Year celebrations and Golden Week.

Celebrating during the seventh month of the year, in July for those following the solar calendars and August for those following the lunar, Obon is a time when many Japanese workers return to their hometowns to pay respect to their ancestors, during which there are a series of rituals and celebrations that have been carried out all over the country for more than 500 years.

For a list of Tokyo festivities, see our 2022 Obon event roundup.

Obon likely arrived in Japan with Buddhism. More specifically, it’s suspected to come from a specific passage in Buddist texts, where one of the disciples learns that his deceased mother is suffering in the afterlife. In response, Buddha suggests making offerings in the shape of food and prayer to the gods to appease them and alleviate the mother’s pain.

Though often compared to China’s Hungry Ghost festival due to many of its customs rooted in Buddhist scriptures, over the centuries Japan’s Obon rituals and celebrations have very much become their own. Fire is the main element used in many rituals and customs throughout Japan. Obon first starts with mukaebi, a practice where people light a small bonfire meant to help guide the spirits of the departed back home. In some regions, in addition to mukaebi, family members make horses and cows made of cucumbers and eggplants respectively. The horse helps spirits return home as soon as possible while the cow slowly accompanies them back to heaven.

Just as the festival starts with fire, it ends with it. On August 16, the last day of Obon larger fires are started to help the spirits leave our world, called okuribi. This day is considered the peak of Obon. The most famous okuribi (pictured above) takes place in Kyoto. Its name comes from the five lines of bonfires that are lit in the mountains. These large bonfires can take form in many ways depending on the region.

Also on the last day of Obon, many also participate in toro nagashi, a tradition where families place paper lanterns in rivers and streams on the last afternoon of Obon to help guide the spirits.

What makes Obon the most anticipated summer holiday is its festivals, more specifically its dance. The tradition of Bon Odori itself is said to go back to the Muromachi Period (1336–1573) as a way to entertain the crowds. The songs and dance moves are to honor ancestors. Over time, the dances’ religious connotation has diminished but it remains a staple of summer in Japan. 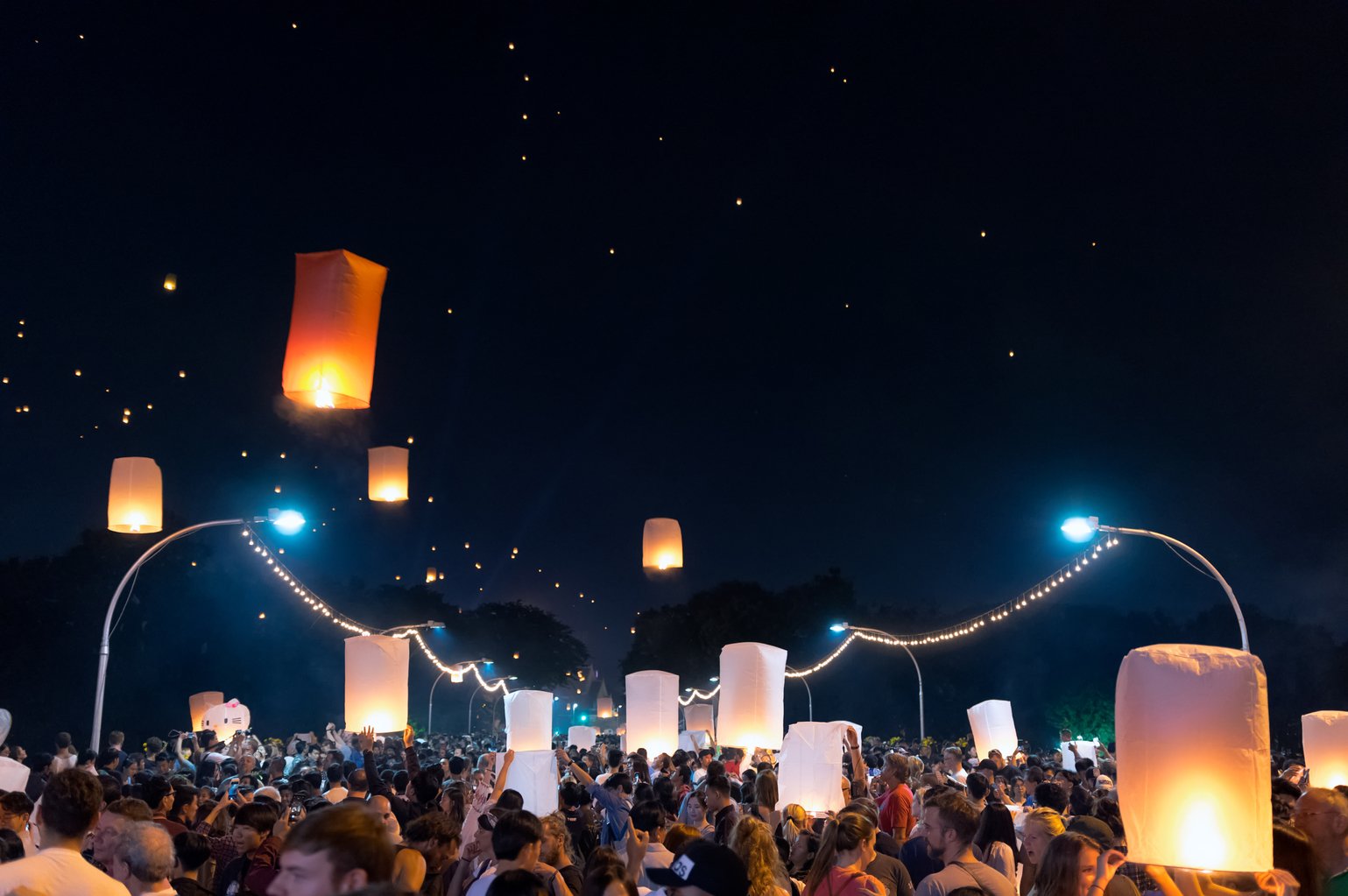 Obon is an incredible time to travel to Japan because of all the variations in customs among the regions. We’ll share some of the most interesting ones here, but know that there are many, many more.

Rosoku Morai is a special Obon celebration that is unique to Hokkaido and is often compared to Halloween. Besides Hakodate, where it is actually celebrated in July, many municipalities celebrate the festival on August 7, during which sweets and candles are gifted and received. This unique summer festival is often compared to Halloween, as it involves giving and receiving sweets as well as candles. There are also special songs that are only sung during Rosoku Morai, and different cities will have their own version and lyrics.

Iwate starts Obon celebrations on the first day of August with Sansa Odori, which lasts for four days. At the end of Obon, there is also Funakko Nagashi, a fiery festival where boats are decorated with lanterns.

In Tono City, there is also a custom called Torogi, where families set up tall lanterns at the homes of the deceased who died within three years of each other. Then, a group of deer dancers in the town perform a unique dance in dedication to those who passed.

Kama no Futa in Tochigi

In northern Tochigi Prefecture, there’s a unique custom called Kama no Futa. It’s believed that it takes spirits exactly 13 days to arrive for the Obon celebrations so they absolutely must leave on August 1 so as not to be late. To assure that the spirits make it on time, families set out offerings of 13 carbonated buns, one for each day of travel.

Owara Kaze no Bon Matsuri in Toyama City is a popular Obon celebration and is held from late August to early September, sometimes spanning over 15 days. Both men and women master dancers gather to perform their art. But entertainment is not limited to dance, as Owara Kaze also hosts a variety of shows and contests.

Nagano is home to Shinno Bon Odori, a special nocturnal celebration during which festival-goers dance throughout the night, from 9pm to 6am. It’s also customary to eat tempura and oyaki (fried wheat or buckwheat flour cake) during this time of year, and you’ll many of these on your way to and from the festival.

Awa Odori is held from August 12 to 15 and is the biggest dance festival in Japan, where dancers and musicians usually parade the streets. The tradition hails from the city of the same name – Awa in Tokushima – and is said to have a history stretching back more than 400 years. To most, this festival is what you would think of when thinking of Obon matsuri.

Kasa Odori, or “umbrella dance” in English, is one of the few Obon dances that managed to expand nationwide. The festival is a local tradition of Inaba in Tottori Prefecture, where it’s said that this dance originated as part of a rainmaking ritual. Today, the biggest and most anticipated Kasa Odori is Tottori City’s Shan Shan Kasa Odori. You can spot a Kasa Odori in your area thanks to the many paper umbrella used by performers.