Bordered by the Arakawa and Sumida rivers, Kita-Senju has long been a popular stepping off point from which to view the spectacular Adachi Fireworks Festival. Despite the cancellation of the 2020 and 2021 event, the former Edo Period postal town remains a fine choice for urban exploration. There are shotengai on both sides of the station, covered and uncovered, accommodating all manner of businesses both new and old. The lengthiest is along Kyu-Nikko Kaido Street which stretches almost the entire length of the neighborhood and has many historical structures along its route such as the wooden Yokohama Family House.

Some of the buildings are still home to operational businesses including Yoshida Emaya, which specializes in ema (wooden plaques) and Edo-style paper lanterns, and the orthopedic clinic Nagura, its idyllic dwellings dating back to 1770. Stop by the local tourist office Senju Street Station for local maps and information to point you in the right direction.

As you might expect there are lots of small shrines and temples scattered around too, with Shosenji Temple being notable for its red-lacquered gate and the Indian-influenced stylings of its main building.

Discover a little more history at the Sekido Museum of Art, located near the historically significant Senju-Ohashi Bridge. The precursor of the current 1927-built steel version was the first to span the Sumida River and has appeared in the works of ukiyo-e artists Hiroshige and Hokusai.

With a lot of ground to cover there are fortunately plenty of places to have a rest and refuel. Freshen up in the temple-styled structure of Daikoku-yu bathhouse before squeezing into Matador Gyukotsu Ramen and slurping down its signature beef-topped broth, or check out Icelandic Lamb Meat Shop Oz, which prides itself on the succulent meatiness of its mountain-reared livestock. Much like the experience offered by shotengai for shoppers, the evening drinking environment of yokocho (drinking alleys) is heaped with old-school vibes. The number of tourists flocking to areas such as Shinjuku’s Golden Gai has somewhat diluted the authenticity of many yokocho (not to mention driven up prices) but Nomiya Yokocho in Kita-Senju is managing to hold on to that original charm.

There’s the usual fare of salarymen spilling out from the station’s West Exit looking for a post-work wind-down but the nearby campus of Tokyo Denki University also adds a dash of youthful vibrancy to the area. You can’t go wrong with standing bar Beer-Ma with its 1,500-strong selection of bottled beers, or Agalico, which offers some decent bites from its fusion menu. The relocation of Tsukiji’s famous fish market to the soulless megacomplex in Toyosu left many who enjoyed the original well-worn, rustic setting disappointed. However, it isn’t the only fish market in town.

The Adachi Market on the banks of the Sumida River may not be as impressive in terms of scale, but unlike Toyosu, the general public can enter the wholesale market to get a closer view of the produce and chat freely with the friendly traders. Be aware though that this is only allowed between 9am and 11am on the second Saturday of every odd month. Naturally, there are nearby places at which you can get a decent sushi fix such as Takesushi. It may not be the cheapest but it has a few uncommon offerings that keeps things interesting. If you fancy trying to catch a few fish yourself, take a short walk a little further along the river to the indoor fishing center Super Fishing Adachi. Within the same grounds of the fishing center is Murasaki Park. The addition of skateboarding to the Olympic roster has seen a surge of interest in the sport but very few places in which to practice and hone those skills.

This large skatepark has both indoor and outdoor courses, full of various ramps and rails that cater for a wide variety of levels. If two wheels rather than four are more your thing, they also have a BMX course.

Newcomers are welcome, with schools available for both disciplines, and a pro shop for any gear upgrades you might need. If you’d rather whizz around on something with a bit more grunt, check out the adjacent mini karting circuit, City Kart, for some fast-paced fun. 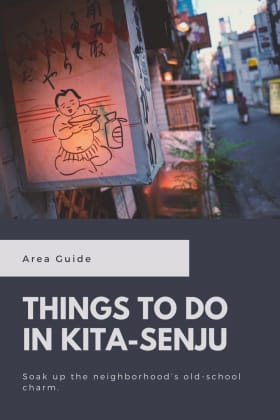