The Seto Inland Sea, or Setouchi region, offers gorgeous nature and edgy, thought-provoking art all in one locale. Out of 3,000 islands, we’ve picked out a few of our recommended must-sees and must-dos.

For travelers who like to commune with nature while exploring new regions, the approximately 70km Shimanami Kaido cycling route is not to be missed. Stretching on the Honshu side from Onomichi (just north of Hiroshima city) to Imabari in Shikoku’s Ehime Prefecture, the well-mapped route traverses seven islands and may be done at your own pace. While some cycling enthusiasts zip through the entire course in a day, many travelers opt to stay overnight on one of the islands to enjoy a more leisurely experience.

We started on the Onomichi side, although you could just as easily begin in Imabari. Although bicycle reservations are recommended during peak travel seasons, we procured our bicycles easily from the rental counter next to the port terminal. The route officially begins with a five-minute ferry ride from Onomichi to Mukaishima (the shortest ferry ride in Japan). Since we had only one full day at our disposal, we planned to only go halfway to Imabari and then return via ferry to Onomichi in the evening.

We began at 8am and for the next seven hours we wove our way through the islands amidst a fresh ocean breeze and stunning views of the Seto Inland Sea. It was not too strenuous, except for the steep inclines preceding each bridge. We stopped to reward ourselves with treats such as a citrus-scented foot bath just before the bridge to the second island, Innoshima and Italian gelato at the waterfront Dolce ice cream shop on the third island, Ikuchijima.

We decided to return to Onomichi from Setoda Port on Ikuchijima, roughly the midway point of the route. We stopped beforehand at the Shiomachi shopping street, whose intriguing Edo-style architecture exudes a slow vibe, and where shops feature local Setoda lemons, the area’s signature fruit. The Shiomachitei Café & Bar uses pesticide-free lemons for its creative dishes, including honey spice lemonade, lemon pancakes and lemon butter chicken curry. They also do bicycle repair here, but be aware of the hours (11am to 4pm, closed Mondays). Also worth exploring in Setoda is Kousanji temple, a fantastical Pure Land Buddhism-style complex built by a local businessman in the 1930s to honor his late mother. With its seaside promenade perfect for long coastal walks, retro buildings and Temple Walk meandering through the city and adjacent mountains, Onomichi is something special. We stayed at a surprisingly stylish (and fairly inexpensive) boutique hotel, the Shima Inn, just steps from the city’s lively Shingai bar district, and a pleasant 25-minute walk to the port.

“Onomichi is something special”

We headed to the wharf the next morning for a breakfast of delicious coffee and breads at the U2 complex, just next to where we had rented our bicycles. Catering to cyclists’ every need, the minimalist-style renovated warehouse features an onsite bicycle shop offering maps and advice about the Shimanami Kaido, the luxurious Cycle Hotel (someday!), a restaurant featuring locally sourced meats and vegetables, and the cleverly titled Kog bar, from kogu (to pedal). 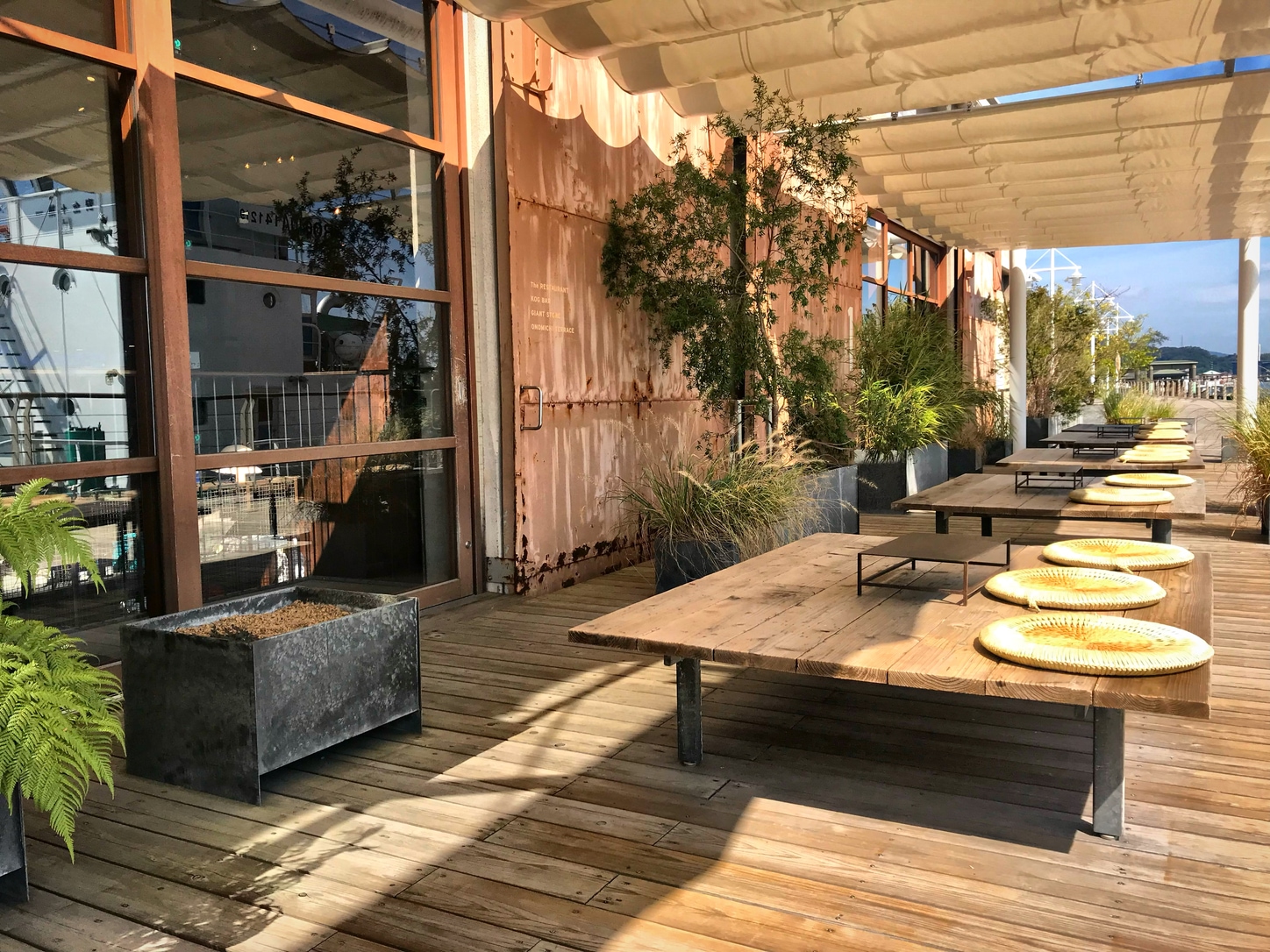 Art and Politics on Momoshima

The U2 complex sits right at Onomichi Port, and after finishing breakfast on its sunny terrace, we walked just a few steps to take the short ferry ride to the island of Momoshima – home to Art Base Momoshima, which is on the converted grounds of a former school. Artworks here offer intriguing takes on relevant social issues, including founder Yukinori Yanagi’s own work: an edgy series wherein he created collections of paper money and national flags out of sand – and then set up ant colonies inside to get to work.

“The ants make their own little societies in there, and you don’t know whether they are creating something or destroying it,” Yanagi told us. “Actually, I think it is very similar to what we humans have done, particularly under capitalism.”

The critique of governments, money and even the art world itself is apparent here, and ABM includes works by other artists with similarly strong sociopolitical commentary. Our visit coincided with an exhibition of Nobuyuki Oura’s collages of the Showa emperor, which sparked enormous controversy when they were shown in Toyama Prefecture during the 1980s, and a dramatic video montage by Meiro Koizumi blending reality, fiction and his own childhood dreams involving his father being arrested by security police during an anti-military demonstration.

“We must struggle against injustice from many standpoints, particularly within today’s political climate, and art can do this because it sparks dialogue,” Yanagi commented. “I created Art Base Momoshima so that artists could express themselves without restriction.” Located further up the coast is the site of the Setouchi Triennale, which began in 2010 to breathe new life into the Seto Inland Sea islands. The triannual event is an ideal time to visit the region due to the vibrant offerings of artistic performances, food-themed events and workshops celebrating all manner of local culture that coincide with the triennale. (Start planning for 2022 now!)

That said, however, many of the art installations are permanent fixtures throughout the year, and one major event goal is to encourage tourism during off-seasonal times – so really, any time is good for visiting these islands.

An excellent place to start your art exploration is Kitahama Alley, alongside the harbor in Takamatsu, Kagawa Prefecture, a major triennale hub. Like U2 in Onomichi, the restored warehouse complex is infused with character, housing numerous shops, vintage bookstores and restaurants, including the impeccably styled Salon Blue café and bar. The alley is also a fantastic informational clearinghouse to find out the latest local happenings in art and design. While Naoshima has become the face of the triennale (and local art island tourism in general) thanks to the Benesse Corporation and Yayoi Kusama’s iconic pumpkins, we opted to prioritize the other islands. Our first visit was to the pair of brother and sister islands Ogijima and Megijima. We found both to be immensely tranquil locales for exploring local art, particularly Ogijima, whose installations are all easily accessible on foot and included intensely thought-provoking works such as the apocalyptic landscapes of German artist Gregor Schneider.

Shodoshima is another island worth exploring, although its sprawling size necessitates a car (or local bus transport). The island is a center of olive and shoyu production, and the air is fragrant with aromas, including the deep, rich woods of local buildings. While locating the artworks sometimes felt like a treasure hunt, the exploration was half the experience – and opening the door to each venue felt like an interplay between the seen and unseen, wherein we entered a completely new reality.

What to Know Before You Go

Check ferry schedules in advance, as many are few and far between.

Drinking water and sunscreen are a must, particularly during hot weather.

When riding the Shimanami Kaido, invest in a cushy seat cover that can be purchased at most bicycle shops. You’ll thank us!

More info about the Setouchi Triennale including information on off-season happenings at setouchi-artfest.jp/en