“We Want to Create Our Own Genre”: Pop Culture Twins AMIAYA Talk Fashion, Passion and Tricking Their Boyfriends

Known for their pink bobbed hair and flamboyant wardrobes, Ami and Aya Suzuki have a goal: to leave their mark on the fashion industry. The colorful identical twins, referred to collectively as AMIAYA, have seen their fame spread rapidly over the past couple of years thanks to numerous appearances at international fashion weeks.

These days they can often be seen sporting matching attire, however, that wasn’t always the case. Things started to change, they tell TW, after they watched Tim Burton’s film Miss Peregrine’s Home for Peculiar Children based on Ransom Riggs’ bestselling novel of the same name. “We used to have our own distinct way of dressing and wear our hair differently, but then we saw that movie and it left a significant impression on us,” says Aya. “You had these twins [Thomas and Joseph Odwell, called the Masked Ballerinas in the book] who were quite frightening and at the same time fascinating to look at. The fact that they were wearing the same outfits made a big impact and we thought maybe we should give that a go. Since then, the two of us have gone for similar hairstyles and regularly worn matching clothes and, as a result, there’s been a lot more interest in us from overseas.”

Born and raised in Hamamatsu, Shizuoka, the twin sisters say they were both shy growing up, often hiding between their mother’s legs when other people were around. As they grew older, the two girls took on more responsibility around the house and would often look after their younger siblings (nine and seven years their junior). While members of their immediate family could always distinguish between them, more distant relatives were sometimes left guessing as to who was who. Of course, we want to know, did they ever trick their boyfriends? The twins giggle coyly as they tell the story of the time when Aya’s boyfriend unwittingly chatted up the both of them. “He called and I happened to answer,” says Ami. “He didn’t have a clue. I handed the phone over to Aya during the conversation and he still didn’t realize that he’d been talking to two different people.” [Laughs] With dreams of following in the footsteps of their idols, Ami and Yumi from the pop duo Puffy, Ami and Aya decided to move to Tokyo at the age of 15 and were soon scouted by a talent agency while walking down Takeshita-dori in Harajuku. “Being our first time away from home it was tough and there were occasions when we didn’t even have enough money to take a train,” remembers Aya. “It was our choice to live in the capital, so the intention was to stick things out. The fact that we had each other made it easier. There was someone to empathize with. It definitely made our bond grow stronger.”

The twins funded their stay in Tokyo by doing a variety of odd jobs including one at a cosmetics factory. They also received an allowance from their mother who worked at a convenience store to support them. Feeling guilty, the teens returned home and saved up as much money as they could before returning to the capital at 17. The second time around proved a lot easier for them both as they started to establish themselves in the fashion industry.

Featuring in a variety of magazines and advertising campaigns, they became known for their aomoji-kei style (a radical and creative fashion subculture influenced by trends in Harajuku). The uniqueness of their look proved popular and, as a result, their fanbase grew with many young women imitating their look. With their modeling careers taking off, the duo decided to release the Aya Ami Book in 2010, which sold over 40,000 copies. A year later, they launched their own label named Jouetie.

“We were asked by our management if we’d be interested in creating our own brand and the two of us were both immediately very keen,” says Ami. “Fashion is one of our big passions yet at the same time we didn’t want to step on the toes of other labels who we sometimes collaborated with. A lot of our customers are into street designs and that’s the kind of market we are targeting, yet we welcome anyone. It’s great to see a range of customers visiting our stores.”

“We have a mix of concepts including romance, minimalism and street,” continues Aya. “It’s not a compartmentalized label that’s distinctly Japanese. We are coming from different angles. During the design process, we are looking to create clothes and accessories that are positive and fun. The name Jouetie comes from the French word ‘jouet’ meaning toy. Seeing kids play with toys, you can sense the joy it brings them, and we want our customers to feel the same when they try
our items.”

“The hope is that one day when people think of Japan, they will think AMIAYA”

Since the first Jouetie store opened eight years ago, AMIAYA’s popularity has continued to skyrocket, leading to several television appearances. Beyond modeling and design, the twins also DJ and in 2013 released a mini-album, Tokyo Pop. In recent years, though, the multi-talented sisters have focused more on raising their profile abroad, regularly visiting international fashion weeks. While they don’t actually perform on the catwalk, their striking appearance gets them plenty of attention wherever they go.

“I guess the way we style ourselves is quite unusual for people outside of Japan, though having said that, it’s pretty unconventional for people in this country, too,” says Aya, laughing. “We get a lot of good feedback when we’re abroad and are regularly told that nobody else dresses like us. It’s nice to hear and certainly does boost our confidence. On top of that, it’s good for our label as the world gets to see our clothes. No matter what city we’re in, the aim is to go to as many parties and events as possible as we can gain more exposure, and this can often lead to new opportunities.” “The first time we went to a fashion week was in New York in the autumn of 2017,” recalls Ami. “We always finance ourselves because [we consider it a form of] doing research into the industry. At the same time, these trips have given us a much bigger platform. We’ve been in Elle magazine and featured on the Instagram page. As a result, there has been a large increase in the number of our own followers on social media, more than 70 percent of whom are foreigners. It’s hard for us to believe. Things have kind of exploded in the past two years.”

Between them, Ami and Aya now have more than half a million Instagram followers and the numbers are only likely to increase as they continue with their global excursions. The pair recently visited France for Paris Haute Couture Fashion Week and are considering an extended stay in either London or New York later this year. “Our goal is to become international fashion icons,” says Ami. “We want to create our own genre,” adds Aya. “The hope is that one day when people think of Japan, they will think AMIAYA.” 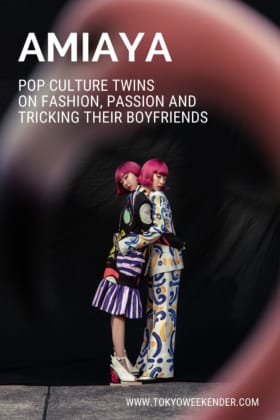