Amid high-rise buildings and asphyxiating crowds of Tokyo visitors can still find relatively unknown neighborhoods that remain frozen in time.

One such neighborhood is Shibamata located away from the bustling city center along the Edo River in eastern Tokyo. This retro neighborhood overshadowed by nearby Asakusa is popular among the Japanese, but relatively unknown among foreign visitors. The Buddhist Temple Where Old and New Tokyo Meet

For all visitors alike, the main attraction is the Shibamata Taishakuten, a Buddhist temple founded back in 1629 formally known as Daikyoji Temple. Most of the temple is open to the general public for free, but the gallery and gardens will set you back ¥400. The wooden carvings in the gallery, masterfully crafted by a number of artists, depict the life and teachings of Buddha. The wooden panels are so detailed that they took 14 years to complete. Do not miss the carved mythical beasts at the base of the structure that supports the panels. The temple guesthouses beside the gallery are Japanese-style rooms with an interesting mixture of Japanese and Western furniture and decor. Attached to the guesthouses is a tranquil Japanese-style garden also completed during the Showa period. The surrounding buildings are barely visible from within the garden making it easy to forget you are in the middle of a build-up area. The garden can be a quick walk, but it could take some time if you pay close attention to the plantation and design. A resting space is right between the guesthouses and the garden for those who want to enjoy the view with a cup of tea. On your way out, take the time to take a look at the rather modern merchandise available at the temple. If you are used to seeing beads and charms for wealth, health and everything else important, you might crack a smile browsing though Thomas the Train and Hello Kitty charms. If you have a pet, they have you covered with charms promoting their health and safety. While you are at it, you might as well try your luck with one of the many fortune slips that come in the form of script on fans, power stones or dancing lion robots.

Stroll Through the Traditional Japanese Market

Connecting to the temple, the Shibamata market is hard to miss. All this traditional shotomachi shopping street you will find shops selling the specialty of the area – mugwort-flavored rice dumplings topped with red bean paste. Multiple stalls are lined-up next to each other – most of them wooden and run by individuals in their golden years. The sight of the shops only can be relaxing – if you can ignore the obvious fire hazard. A few of them have restaurants at the back, but you will most likely have to queue to be seated during rush hour, even on weekdays. At the end of the market, make sure to visit the candy shop, also built during the Showa period. This shop – Haikara Yokocho – is popular with visitors, not only because of its architecture, but also because of the nostalgia it brings with its goods that are nearly impossible to find at large stores.

By the time you stroll to the end of the market, you will have noticed photos or posters of a smiling man in a jacket and a hat matching in color. That would be Tora-san, the main character of the film series, “It’s Tough Being a Man.” In the series, the ambitious salesman travels to different areas only to have his heart broken by a different woman in each movie. He would often return to his hometown, Shibamata, only to get into arguments with his family and set off to a different area to run away from conflict. The contribution of the film series to the development of the area as a tourist destination is obvious. Some parts of the neighborhood have a Harajuku-like atmosphere, as it is not rare to see fans of the series cosplaying as Tora-san, walking around the market or posing in front of the station. If you are also a fan of the series or would like to know more about it, at the Katsushika Shibamata Tora-san Museum you can see recreated sets from the films and costumes worn by the characters. Even if you are not interested in the films, the sets will give you a sense of how life in Japan was in the late ‘60s when the popular series was recorded and released. A ticket for the museum costs ¥500 or ¥550 for the combo ticket, which includes admission to the section dedicated to the director, Yoji Yamada.

A Ferry Ride on the Edo River

Finish your stroll at the Edo River, serving as a natural border between Tokyo and Chiba Prefecture. There you can ride Tokyo’s last traditional boat crossing, the Yagiri no Watashi. Remaining since the Edo period, the ferry was used exclusively by farmers of the area to transport goods or visit the temple. Other crossings were discontinued due to the development of railways and other forms of transportation, but this one survives thanks to the “It’s Tough Being a Man” series and a hit song by Takashi Hosokawa.

A one-way trip lasts about 5 minutes and costs ¥200, but most opt for a round trip. Should you decide not to ride the boat, you can still take it easy at the pedestrian pathway along the river and enjoy the view of Tokyo Skytree from there. 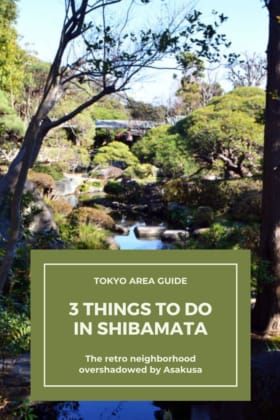