One Day in Ginza: Guide to Shopping, Dining & Kabuki

At the height of the Japanese economic bubble in the ’80s, Ginza was at the center of it all. The posterboy of capitalism. Full of swagger and big, bold, monied and strutting around like a flamboyant Elton John in 20-inch Louboutin heels live at Madison Square Garden. Those days can still be felt in Ginza, and there remains even today, an element of hedonism and luxury that epitomized the era 30 years ago. Its proximity to Tokyo Station, Marunouchi, Hibiya, Yurakucho and Tsukiji also makes it a typical destination for locals and visitors alike.

Ginza is home to all the major brands such as Dior, Hermes, Louis Vuitton and Chanel but it also has smaller more sophisticated brands such as Anya Hindmarch and Japanese labels Porter and Beams. The area has also recently welcomed two new massive retail spaces, Tokyu Plaza and Ginza Six. The former is ram-packed with restaurants such as organic favorite Bareburger and retail stores including multi-brand legends Urban Research. The latter, which could be considered considerably more upscale, includes brands such as Celine, Valentino and swish art gallery The Club.

Although things have changed since the ’80s the area is still famous for its love affair with high fashion. The major department stores here are Mitsukoshi and Matsuya, which are only a minute away from each other as well as brands such as Uniqlo, Brooks Brothers and Comme des Garçons’ beautiful and must-visit multilevel Dover Street Market. DSM as it’s more commonly known is home to all the Comme des Garçons labels such as Junya Watanabe and Tricot as well as special collaborations with other brands such as Thom Browne, Undercover and Supreme. The seventh floor also hosts the wonderful Parisian café Rose Bakery where you can munch one of the best scones in the world and some seriously good coffee. It’s worth a visit just for the scones.

Ginza is packed with consumers by day and pleasure seekers by night due to the nest of top-end hostess bars which are mostly based in the back alleys and need-to-know streets. There’s a lot of money being flouted around this area so if you have an aversion to ostentatiousness then better find a less extravagant district in the east side of the city.

Ginza has a very different feel to other main hubs such as Shinjuku and Shibuya. It’s clean, there are many well-dressed ladies and dapper gents and it has a slight air of European cities such as Paris and London. There are some quaint tree-lined back streets and quaint little jewelry stores as well as some super cocktail bars such as the world-renowned Star Bar Ginza, Bar High Five and a personal favorite, Tender Bar, run by the legendary cocktail master Kazuo Ueda.

Ginza is a lovely area to walk around in, especially at the weekend where the main pedestrian thoroughfares are closed to traffic and are transformed into hokoten or (pedestrian paradise). Try the great Belgian waffle store Manneken, a cup of green tea at the wonderful Uogashi Meicha which serves as a tea store and café and one-of-a-kind stationery at the fabled Itoya – a renowned nine-floor temple to paper and pens.

Don’t expect much in the way of humility. And don’t look for an ordinary night club or pedestrian bar scene. There are bars but they are usually pricy. One exception to this, however, is the Lion Beer Hall which opened in the ’30s and models itself on Bavarian beer halls of old. It’s also opened all day which is perfect for a beer, snack and much-needed respite after a day of shopping. There are also plenty of Michelin-starred eateries such as Sushi Yoshitake, Tempura Kondo and French restaurant Esquisse.

It may sound as though Ginza is just about fashion or tea but there is a fair amount of culture too. There are some quality galleries here like Pola Museum Annex, Ginza Graphic Gallery and Chanel’s Nexus Hall. Ginza also plays host to the renowned Kabukiza, built in 1889, which is the main theater in Tokyo for kabuki, the ancient and well-loved Japanese performance art. To the uninitiated kabuki can be quite unintelligible and often very long but one-act tickets are available and it’s definitely worth some of your time. Some of the stories, sets, costumes and masks are stunning and can really make your day.

Ginza is something else. A sophisticated micro-city within Tokyo packed with affluence and charm. It’s well worth a day or two of any visitor’s time and if you wander down the backstreets you’re sure to find some real literal and metaphorical gems. 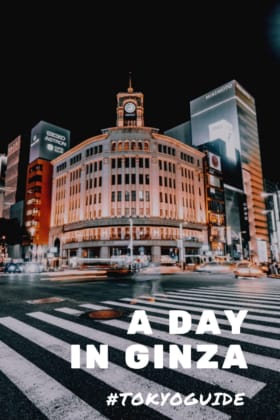