Discover a more intimate side to Shinjuku, away from all the glitzy skyscrapers, in this long-standing drinking quarter. Sandwiched between the serene, historical Hanazono Shrine and the winding, leafy Shinjuku Esplanade Park  – which used to be part of the Toden streetcar route before it was removed in 1970 – Golden Gai is an eclectic mix of over 200 tiny bars in ramshackle two-story buildings across six narrow alleyways, most of which can barely handle more than 10 people. Starting life as a seedy underbelly of prostitution services before the 1958 Anti-prostitution Act turned the area into one serving alcohol rather than sex, Golden Gai continues to emanate the vibe of a bygone era.

Although its existence has been threatened several times over the years (most recently, a fire in 2016 destroyed four bars) and the ability of the rickety buildings to withstand a natural disaster has often been questioned, the area has nevertheless thrived, seeing a surge in the number of overseas visitors flocking to the area. Some bars have embraced the new visitors, others haven’t. In an effort to deter casual guests, some venues have added expensive cover charges while others openly advertise the fact that they do not. For the most part, it’s pretty clear what kind of deal you’re walking into. Part of the charm of Golden Gai is poking around and discovering weird and wonderful options by yourself, but if you’re looking for a few pointers before heading down, here are some Tokyo Weekender recommendations to get you started.

Tsuyoshi, the English-speaking owner of Ace’s, is a warm and welcoming presence in this simple, minimalistic watering hole. There’s a healthy flow of customers to with which to mingle and Tsuyoshi himself has plenty of tales about the area to share. With the Rugby World Cup 2019 in full swing, squeeze into Dansan for some lively chat amongst Japanese rugby-themed decor and rugby-loving patrons, which often include members of the Suntory Sungoliath rugby team. The large chandeliers crammed into the confines of Albatross – which has sister bars in Shinjuku’s Omoide Yokocho and Koenji – create a warm, cozy atmosphere. There’s even a rooftop bar and gallery to check out. 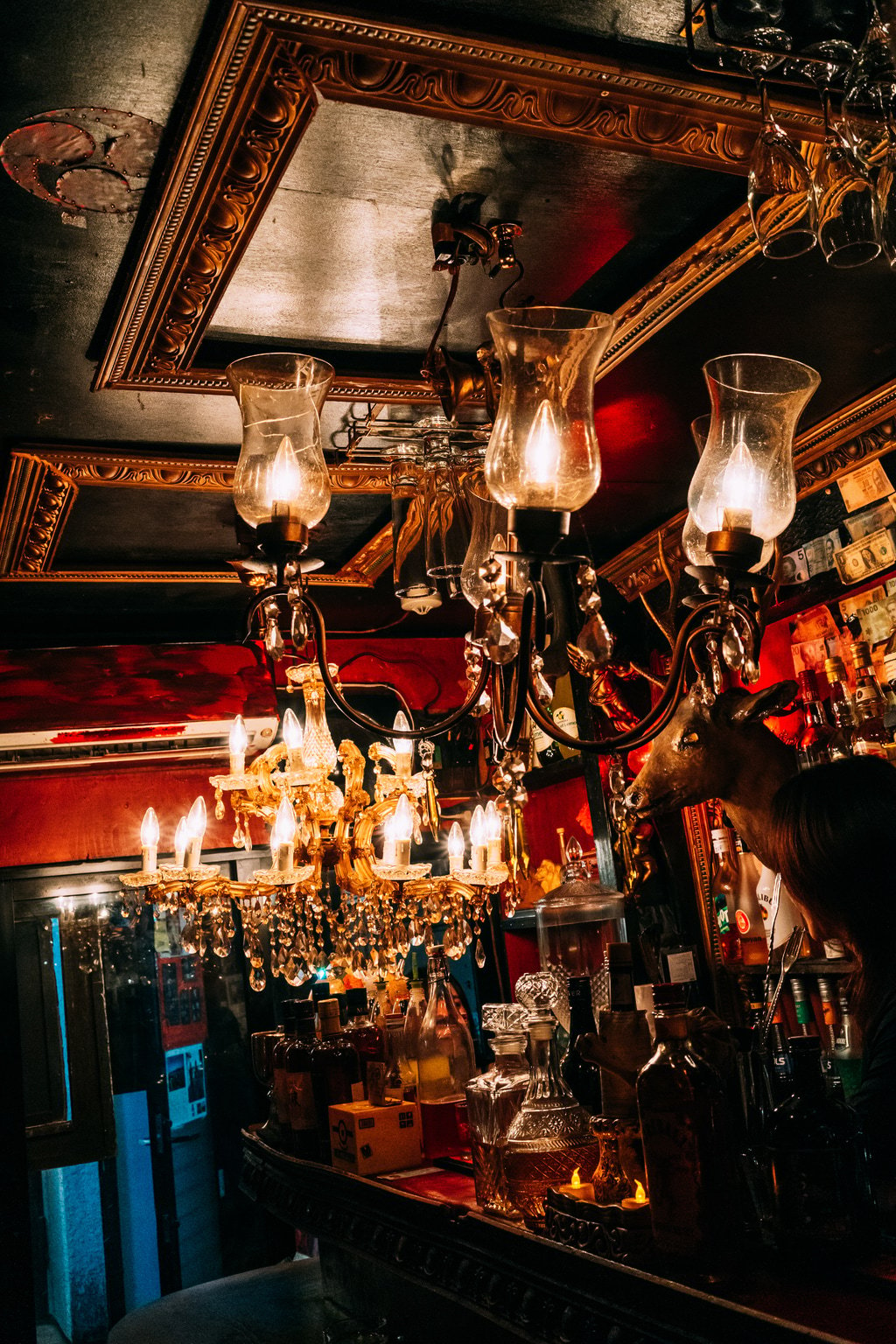 A large chandelier is also the centerpiece of the Suspiria-themed Cambiare which has plenty of stylings taken from the 1977 Italian horror classic for fans to spot. Film aficionados will also enjoy La Jetée. A well-known favorite of many visiting Hollywood directors such as Quentin Tarantino, the dimly lit bar is adorned with avant-garde movie posters and has remained virtually unchanged since it opened in 1974 by its French-speaking cinephile owner.

For more horror movie fun, Deathmatch in Hell screens old classics such as Nightmare on Elm Street to enjoy, along with a romping heavy metal soundtrack. Chock full of old VHS tapes, DVDs and movie-related merchandise, booze is appropriately priced at ¥666. Alternatively, head down to punk bar Hair of the Dog for some more raucous sounds. If you’re looking for smoother vibes then check out one of the jazz bars such as Shiramuren or BACK SUN Jazz Club. 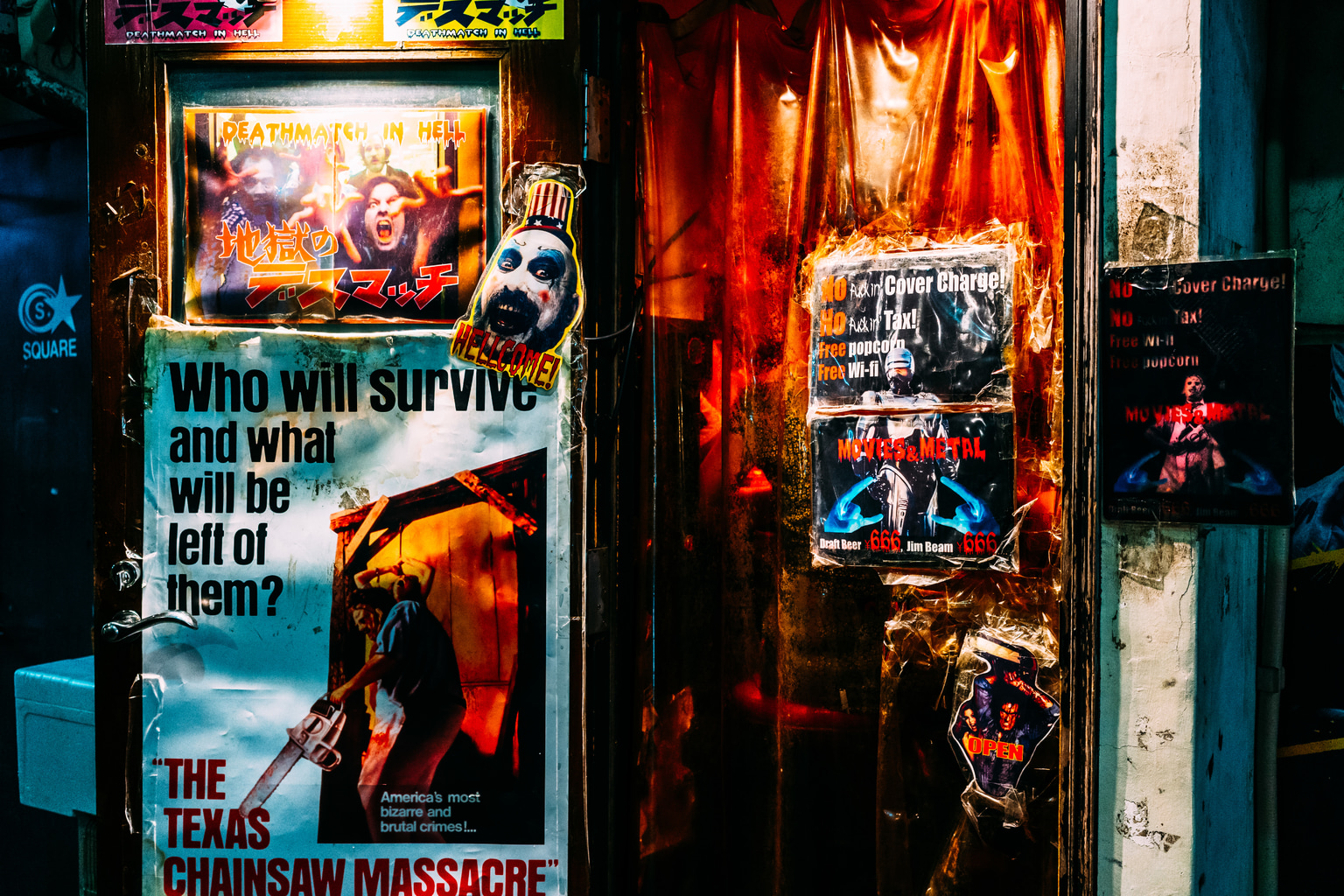 Though it’s better to eat before heading to Golden Gai (especially as most of the bars don’t really get going until after 9pm) there are few spots that can help curb hunger pangs. Grab a bowl of sardine-broth ramen at the popular Ramen Nagi or slurp down as much miso soup as you can for ¥1,000 at the plainly named Miso Soup. If you’re looking for something less watery, enjoy delicious homemade Italian dishes at Bistro Pavo or cheap kushiage at Dongara-Gassyan.