Mori Building Urban Lab: Envisioning Tokyo as a Model City of the Future

Captivating could be one word to describe Tokyo Weekender’s experience last week at the Mori Building Urban Lab in Roppongi. The urban landscape developer Mori Building Co., Ltd., which has developed more than 100 office facilities in Japan and China including Roppongi Hills, Toranomon Hills and the Shanghai World Financial Center, invited the press to see the new facility that will help researchers view Tokyo from a multifaceted perspective as they consider the future vision of Tokyo.

Admittedly, an event showcasing models of Tokyo, New York and Shanghai conjures up imagery of extensive Lego and Playmobil kits. Not to #cancel them, but the prospect wasn’t necessarily appealing. We are glad to say that the projection mapping project at the Mori Building Urban Lab exceeded all expectations. 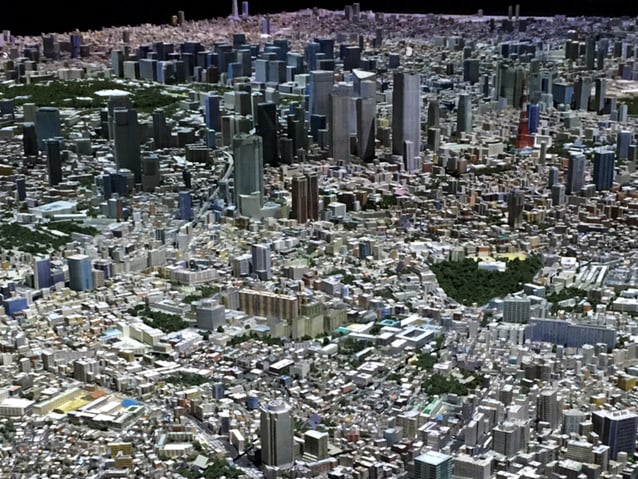 Tokyo in All Its Splendor

For those who had any doubts, the Mori Building Urban Lab provided a pièce de résistance with their video presentation. After the word “welcome” was displayed in several  languages, the depiction of Tokyo repeatedly changed from day to night. Spotlights were placed on various buildings and roadways across the city. Tokyo then transformed into a living, breathing organism.

Vivid greenery enveloped the city; representing the vitality of Tokyo. A monochrome thunderstorm interrupted the tranquility, leading to a Tokyo pop culture storm. Almost blindingly bright colors leapt off the screens and seeped into the buildings. The depiction of Tokyo being both organic and manufactured showcased the multi-faceted nature of Tokyo and its wide-ranging appeal. The video concluded with an explosion of fireworks.

After the video, the invited journalists had a better look of the model. It was a highly detailed, and up-to-date 1:1,000 scale model of Tokyo created over the course of two decades using proprietary technology. The model accurately reproduces Tokyo’s roads, buildings, trees, billboards and even road signs. By providing a bird’s-eye view of the entire city, the model makes it easier to grasp the city’s structure, scale, urban topography and spatial relationships that are difficult to capture with words. The Story of Tokyo

The 15m by 24m model covers 13 central wards of the city – about 230 square kilometers in total. Alongside the Tokyo model, Mori Building produced equivalent models of New York’s Manhattan area and Shanghai’s Pudong New Area. By doing so, they aimed to encourage researchers to compare the cities and cognize their respective strengths and shortcomings.

Upon looking at the respective models, one might say that Shanghai has made better use of their limited space and have built higher skyscrapers relative to Tokyo. New York is arguably better organized and has more accessible routes in and out of the city. To the naked eye Tokyo appears to suffer from a lack of greenery, while in actuality Tokyo fares better than its counterparts with 31 percent greenery. London leads with a 36 percent greenery calculation while Shanghai, Paris and New York lag behind with their respective 10, 20 and 25 percent calculations. What is Tokyo’s Future?

It is important to note that the models are not supposed to reflect utopian ideals; they reflected the cities as they are now. This realistic approach allows for dialogue between politicians and shareholders to rectify Tokyo’s shortcomings. The Urban Lab is not open to the general public, but I can attest that if Mori Building has come this far, there is not far to go in terms of Tokyo becoming the leading global city. Their concerted effort and attention to detail will undoubtably mean that we can only expect great things in Tokyo’s near future.

This is particularly critical now with the approach of the Tokyo 2020 Olympics. Mori Building highlighted the fact that London became the most global city in the world following its 2012 Olympics. The Tokyo Olympics could similarly provide a significant platform and act as a prime motivation for innovation and subsequent global success if Tokyo plays its hand well.

If the model is anything to go by, Tokyo’s future is very bright indeed – with thanks to Mori Building Co., Ltd.