After spending time in Tokyo’s concrete jungle, you might be hankering for some greenery and a dose of forest bathing. These six mountain hikes are easily accessible from Tokyo, so hit the dusty trail and enjoy a spot of fresh air. 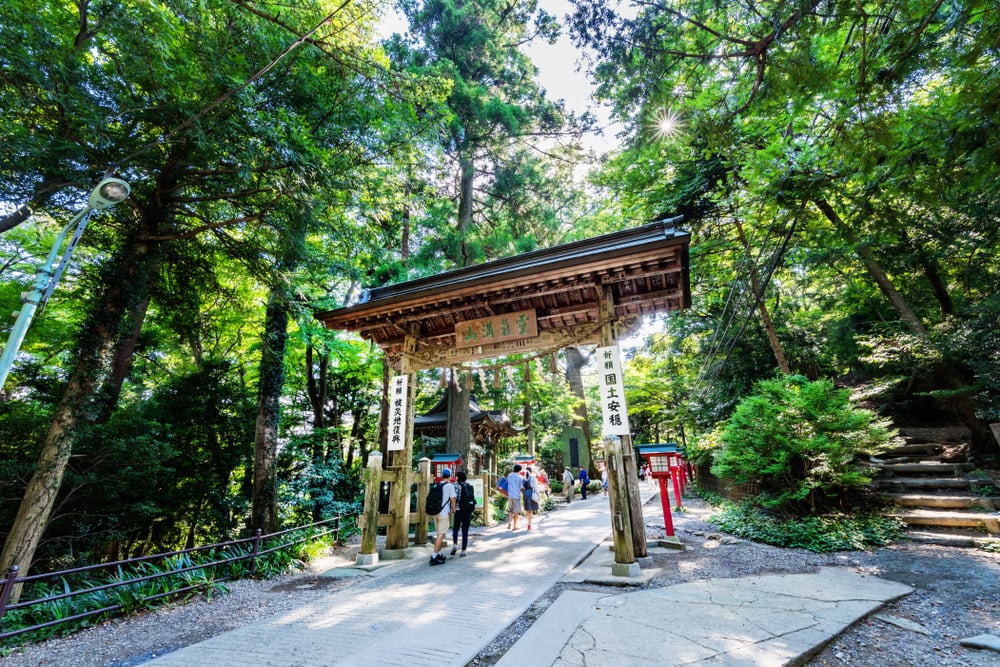 Let’s start with the no-brainer. Mount Takao is less than an hour from Shinjuku Station. The Keio Line offers a direct 50-minute ride to Takaosanguchi Station located at the base of the 599-meter mountain. The summit of Takao offers views of Mount Fuji, but like anywhere else, you will want to reach the viewpoint before noon in order to catch a glimpse of Fuji before it becomes shrouded in clouds. Takao’s trails become clogged during the busy seasons, namely early November when the fall foliage is vibrant, and during the New Year’s period when thousands of visitors make the pilgrimage to the mountain’s ancient temple. The nice thing about Takao is the seven trails leading to the summit offer enough variety for all level of hikers. First of all, there is a cable car that can take visitors halfway up the mountain to the shrine – and the beer garden. Trail one is the easiest route, winding its way up the mountain, past the shrine, the monkey park and various eating establishments. This can be completed in 90 minutes. My personal recommendation is taking trail six, which offers more rustic trails and scenery, including small mountain shrines and waterfalls. Take trail seven for the descent. A challenge to climb, this steep incline is a quick way down, and the trail follows the mountain ridge, offering views of Lake Sagami. For those looking for even more of a challenge, from Takao Station walk over to bus stop 1 and take the bus bound for Jinba Kogen Shita to its last stop (about 35 minutes). The hike to the top of te 857-meter Mount Jinba is relatively easy. At the summit you will see a statue of a white horse, and from there you can take a trail that follows the ridgeline 17km to Mount Takao. This is a great practice route for trail runners. 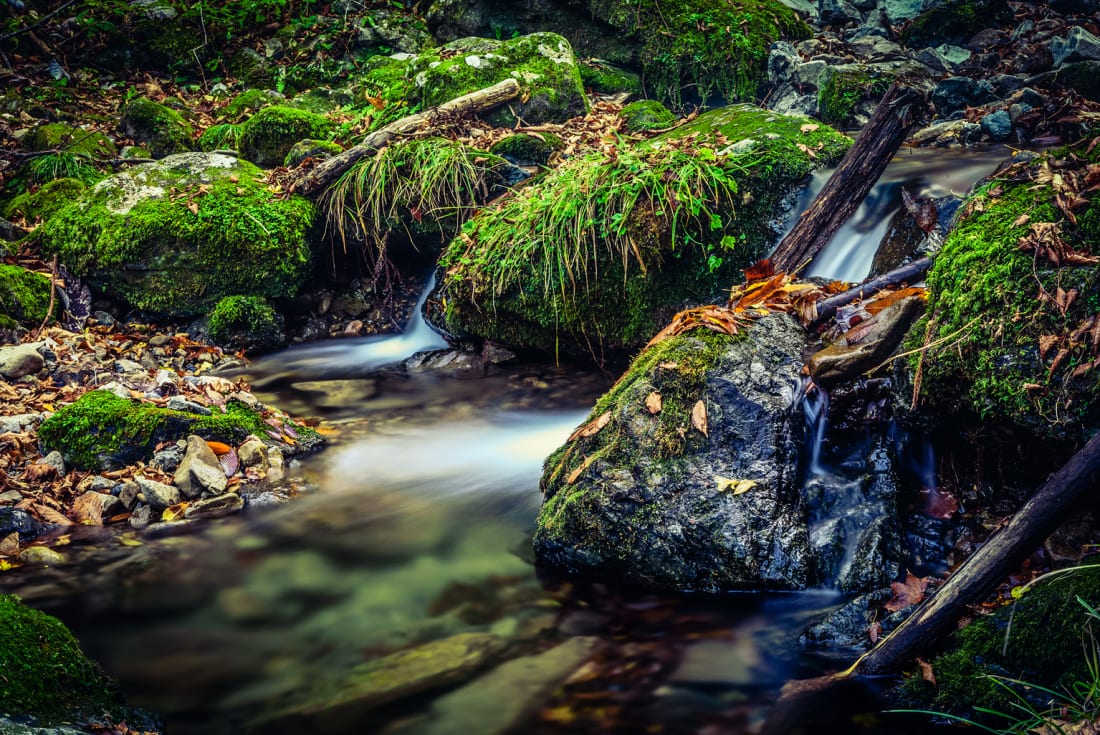 For Tokyo day-hikers, this is a trek we can’t recommend enough. One of the three famous peaks of Okutama, Odake-san (1,267m) is a hike that can be done any time of the year. The journey begins at Mitake Station about an hour and a half from Shinjuku by train. At Mitake Station, head out the only exit and turn right. The bus stop is not too far down the road on the opposite side of the street. Catch a Nishi Tokyo Bus to Cable Shita. From there it is a six-minute cable car ride to the summit of Mount Mitake (929m), home to Musashi-Mitake Shrine, a place of worship for more than 2,000 years. From there, the trail to the summit of Odake takes you past the sacred boulder, Tengu-iwa, a tranquil natural rock garden (offering a lovely picnic spot) and the cascading Ayahiro Falls, another sacred Shinto spot. From there it is a good climb to the summit and its Mount Fuji view. Round-trip, the hike can take approximately five hours (including cable car and bus ride). Rather than heading back to Mitake from the peak of Odake you can hike 90 minutes down to Okutama and cool down in the Tama River and hit up the onsen. Also, rather than hike to Odake, trekkers looking for something new can hike from Mitake to Mount Hinode, a lovely mountain covered in azaleas and rhododendron bushes that is a popular spot to watch New Year’s sunrise. Staying in Okutama, which is located in the western part of Tokyo, this day hike is a bit of a secret, at least when compared to the other mountains surrounding Tokyo proper. The Chuo Line from Shinjuku Station takes you directly to Okutama Station. It is recommended to make this trek during weekends and national holidays when you can catch the 90-minute Holiday Rapid Okutama train (departing at 6:46, 7:44 and 8:19). From Okutama Station take the bus from stand number one (on weekends and holidays departs at 8:35 and 9:35) for a 15-minute ride to the Kawanori-bashi stop. Here you will find the trailhead to Mount Kawanori (1,363m). This is not a strenuous hike but offers enough challenges and nice scenery to stay interesting. The highlight is Hyakuhiro Waterfall, which at 40-meters-tall is one of Tokyo’s most impressive waterfalls. The hiking trails to Mount Kawanori are considered primitive, in the fact they don’t have any toilet facilities. For example the trail to Mount Hinode has solor-powered flush toilets. This lack of modern facilities keeps beginner hikers at bay, which means the trails aren’t as crowded as others. The total hike takes three to four hours. If you don’t want to backtrack to Okutama from the summit of Mount Kawanori, you can hike your way directly to Hatonosu or Kori stations, both on the Chuo Line. 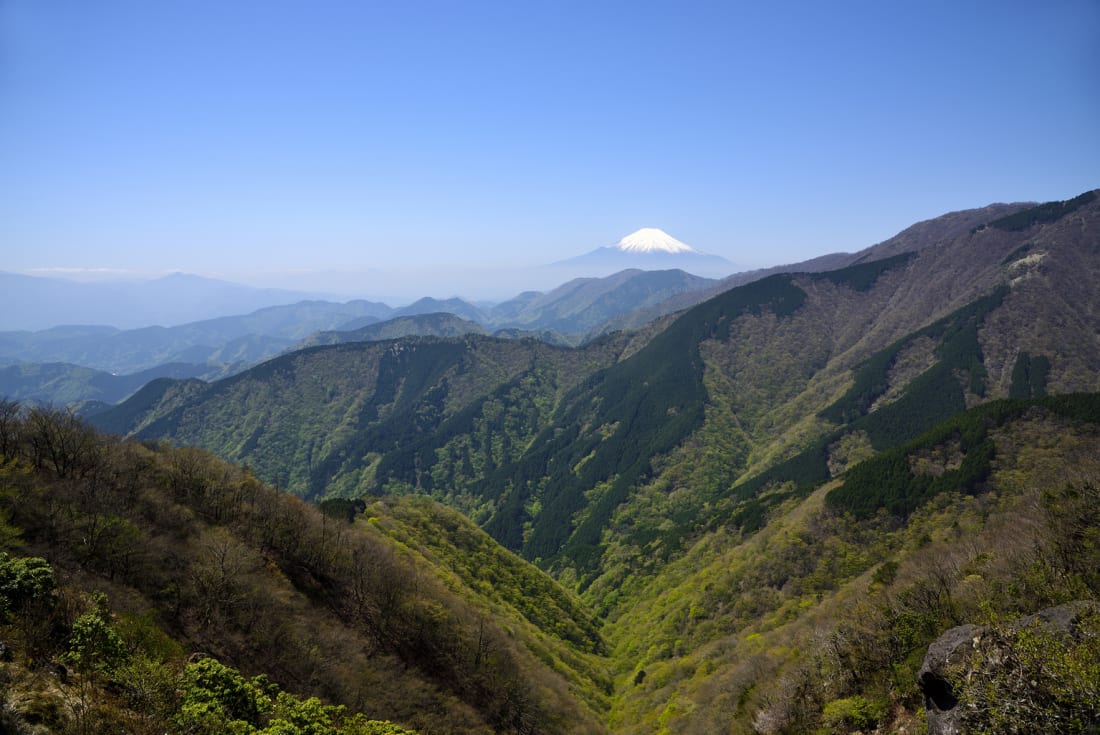 In the northwest section of Kanagawa Prefecture, the wilderness area surrounding Mount Tanzawa is a hidden treasure the locals are keeping to themselves. The web of trails are meticulously maintained, and rise above the tree line, providing a panoramic view of the foothills of Mount Fuji and the surrounding foothills. Frequented by seasoned trail-runners and day-trippers alike, the recommended trailhead starts at the scenic Okura Park. Parking is available, or take the 75-minute Odawara Express from Shinjuku to Shibusawa Station, and then hop on a 10-minute bus-ride to Okura. From the parking area, walk north up the road for 10 minutes until you reach the sign for Mount To-no-take. An excellent practice hike for Fuji, it is a challenging 7km trek to the top of To-no-take (1,491m), with an elevation change of 1,200m. Depending on your itinerary, most hikers choose to stay overnight at Sonbutsu-sanso lodge (lights out at 20:00). Call ahead (in Japanese). Most hikers wake up early to watch sunrise from the stadium seating at the summit. They then make the 70-minute hike to the peak of Mount Tanzawa (1,567m), turn around and head back to Okura. For a different experience, from Okura Park head to the peak of Mount Nabewari (1,273) meters where the proprietor of the mountain hut prepares highly sought-after udon. For a high-end mountain experience, check out the modern teahouse at Afuri Shrine on nearby Mount Oyama. Peaking at 877 meters, Mount Tsukuba is 90 minutes north of Tokyo. Just take the 45-minute Tsukuba Express from Akihabara Station to Tsukuba Station and then hop on the 45-minute bus ride headed for Tsukuba Shrine. Tsukuba Mountain, one of the ‘100 Famous Japanese Mountains’, actually has two peaks representing male and female deities.  According to mythology, the progenitors of Japan, Izanagi-no-Mikoto and Izanami-no-Mikoto, reside in each corresponding peak. The Shinto shrine located at the foot of the mountain, Tsukuba-san-jinja, is one of the oldest in the Tokyo region, with poems dedicated to the shrine dating back to 710 A.D. The hike itself is rather challenging. Starting from the shrine, the trail gets rugged quick. From the east tack, or Shirakumobashi course, it is 2.6km to the top. This is slightly longer, but slightly easier, than the 2.4km Miyukigahara course, which is essentially a straight climb up the mountain with no switchbacks. If you want to save time and energy you can take the cable car directly to the summit. The two-hour ascent is broken up nicely with scenic views of the Kanto valley below and picnic spots. Tsukuba is famous for its rock formations that are given metaphorical descriptions. There is the pile of boulders that appears to be a the back of the god Daikokuten. Another formation depicts the side profile of Buddha. One is two ships passing each other at sea. One interesting formation is that of a frog. One of Japan’s power spots, people toss rocks into the frog’s gaping mouth for good fortune. The summit offers a panoramic view of the Kanto plain, as well as restaurants and souvenir shops. On clear days you can see Mount Fuji and even the Skytree. The descent takes just over an hour for a total round trip of approximately three to four hours. Nokogiriyama – the “saw-tooth mountain – in Chiba, is one of the best day-trips from Tokyo but for some reason is lesser known than its counterparts to the west. Overlooking the town of Kanaya on the coast of Tokyo Bay, Nokogiriyama is a two-hour train ride from Tokyo Station to Hamakanaya Station on the JR Uchibo Line, or a 40-minute ferry ride from Kurihama to Kanaya. The trailhead is about 15 minutes from the ferry port, or 10 minutes from Hamakanaya station. It’s possible to scale the 329m mountain on foot in about an hour, but you can save your legs by taking the cable car to summit in about 5 to 10 minutes. From there, a short walk along a rough path and down some sheltered steps brings you to the sprawling Nihon-ji temple, founded in 725. It’s here you will find the Hyaku-shaku Kannon, a 30-meter high relief image of the Buddhist Goddess of Mercy carved into the rock. A few minutes on from the Kannon is the Ruriko observatory, a collection of lookout points. One of the lookouts here is known as Jigoku Nozoki, ‘A view of hell’, as visitors venture out onto a outcrop offering a vertiginous view. From here you can take the ‘1500-Arhat Approach’ down the mountain. This long path winds past shelves, caves and alcoves in the rock, some naturally formed, some man-made, and each clustered with carved statues of Buddhist devotees and deities. Down a slope you come to the stately 31-meter tall Daibutsu, the largest stone-carved Buddha figure in Japan, sitting meditatively on his pedestal in a tranquil clearing. Mount Nokogiri’s full circuit takes about 90 minutes, longer if you stop to take in the view.