Life is slower in Chiba Prefecture, Tokyo’s unkempt little sister to the east. People don’t bunch up at the train door and rush to the nearest escalator. It’s a calm meander.

A 90-minute train ride across the prefecture on the Sobu and Sotobo lines takes you past family homes with green lawns, a park with rows of tennis courts and lush rice fields where tall cranes wade through the irrigation canals.

Arriving at Kasuza Ichinomiya Station on Chiba’s east coast, rural life gives way to beach life. Once a sleepy hamlet that was a hidden secret of local surfers, Ichinomiya will soon host thousands of people from around the world who will come to watch the inaugural Olympic surf competition of the Tokyo 2020 Games. The population is dwindling for Chiba’s small coastal hamlets that rely on the fishing industry for sustenance. The Olympic surfing competition is seen as a boon for the area. Ichinomiya’s population rose by 4 percent in 2017 (to 12,400), and signs of prosperity can be seen, literally.

A short shuttle bus ride takes us to Tsurigasaki Beach, chosen as the site of next summer’s Olympic competition scheduled for July 26–29, 2020. The dates come with a disclaimer that they could change depending on the weather.

When we arrived for the Ready Steady Tokyo test event at Tsurigasaki Beach on July 18, the competition among 20 men and 20 women vying for a spot on Japan’s Olympic team was delayed for an hour due to rain. 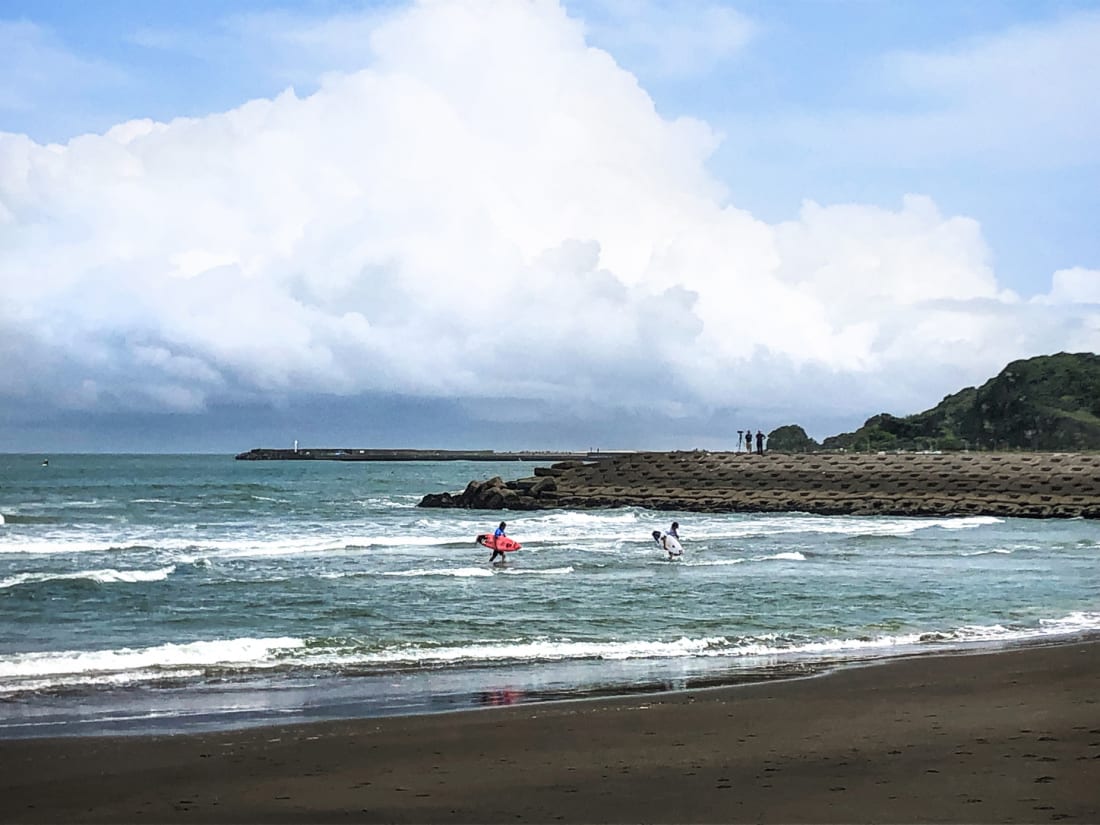 Once underway, during the competition action surfers in groups of five were given 30 minutes to show the judges their best on what some competitors called “smaller than usual” waves, meaning judges must look more closely at the surfers’ technicality rather than their bravado.

For most of the 30 minutes, the surfers could be seen bobbing up and down in the ocean waiting for a decent wave. Once they found one, rides lasted a few seconds. One surfer in an orange rash vest whipped his green surfboard around on the white curl. Next, a surfer in a green shirt wiggled his orange surfboard on top of a rolling wave.

The waves during the test event averaged between 1 to 1.5 meters and International Surfing Association Executive Director Robert Fasulo said the conditions would be acceptable for Olympic competition. Foreign surfers who have surfed Japan’s beaches for decades say Ichinomiya is known for providing consistent waves, but they wouldn’t be considered world-class. Geography and weather patterns prohibit Chiba from delivering the types of waves surfers chase around the globe. Typically the only time waves reach ideal heights in Japan is when a typhoon is churning offshore.

Still, Tsurigasaki Beach has hosted several international surfing events, and is home to a number of pros, including Ohhara, the first Japanese surfer to win the US Open. Ohhara was Japan’s number one ranked surfer until last year when California native Igarashi chose to represent Japan.

This past May Igarashi became the first Japanese surfer to win an elite World Surf League’s Championship tour event when he took the title at the Corona Bali Protected. Currently ranked fifth in the world, Igarashi is an early favorite to medal at the Olympics.

As the host nation, Japan automatically receives one slot for the men’s and women’s surfing event. Leading the way for the women’s team is teenager Shino Matsuda, who won the women’s final at the 2018 Ichinomiya Chiba Open, a World Surf League Qualifying Series event. As surfers climb from the ocean following another round of competition, Fasulo notes that spectator stands are still being built at Tsurigasaki Beach, and they will offer a good view for everyone in attendance. He notes ticket holders will also be able to enjoy a festival area set to be built on the other side of the sand dune.

“I am absolutely confident that first of all, we have the right location with the right waves,” said Fasulo. “I think we are going to be able to add something truly unique…. People are in store for something really special.”