Three of the Best Island and Beach Escapes in Japan

Japan is not revered for its beaches. A quick Google search for “best beaches in Asia” will testify to this. And a not-so-quick train journey to Zushi will only emphasize the point – at least, if white sand and turquoise ocean is what you’re after. Yet after a few vacations spent hunting down that dream island beach experience (I’ve tried Thailand, Malaysia, Vietnam and the Philippines), I surprisingly ended up finding it right here in Japan. From one utopian day on Okinawa’s Tokashiki Island to one Golden Week on the Izu Peninsula, here are my three favorite beach escapes in Japan.

When the ferry from Naha dropped us off at the island’s port, the sky was overcast and I began to wonder if the decision to visit Okinawa out of season was such a wise one after all. On the plus side, we told ourselves, there were hardly any fellow tourists so we would have the beaches to ourselves – even if it rained.

The hotel shuttle bus whisked us through winding, hilly roads and lush vegetation, past grazing goats and a spectacular bird’s-eye view of Tokashiku Beach, before depositing us outside our pension hotel. Reef Inn Kuniyoshi is just a few minutes’ walk from Aharen Beach, which curves protectively around a coral reef, and leads to a 360-degree view point on one end of its 800m stretch. Not wanting to waste any time (we had only booked two nights), we headed straight for the sea. And then, as if it were just dying to show off a bit, the sun came out. It stayed out, too, for the whole of the next day. We rented a kayak in the morning and pinched ourselves regularly as we rowed through water the color of amazonite. It was so clear that we could see, in perfect detail and without a snorkel set, the rainbow-colored fish swimming between our legs.

After lunch, we rented a car and drove around the entire island (it’s only 15km², mind you, so you could probably get away with exploring by bicycle if you aren’t concerned about uphills).

We stopped off for a swim at Tokashiku Beach, which was deserted except for one other pair who were lucky enough to spot a sea turtle shortly before we arrived. And later, our one perfect day on Tokashiki Island came to a close with a sky painted in pastels. 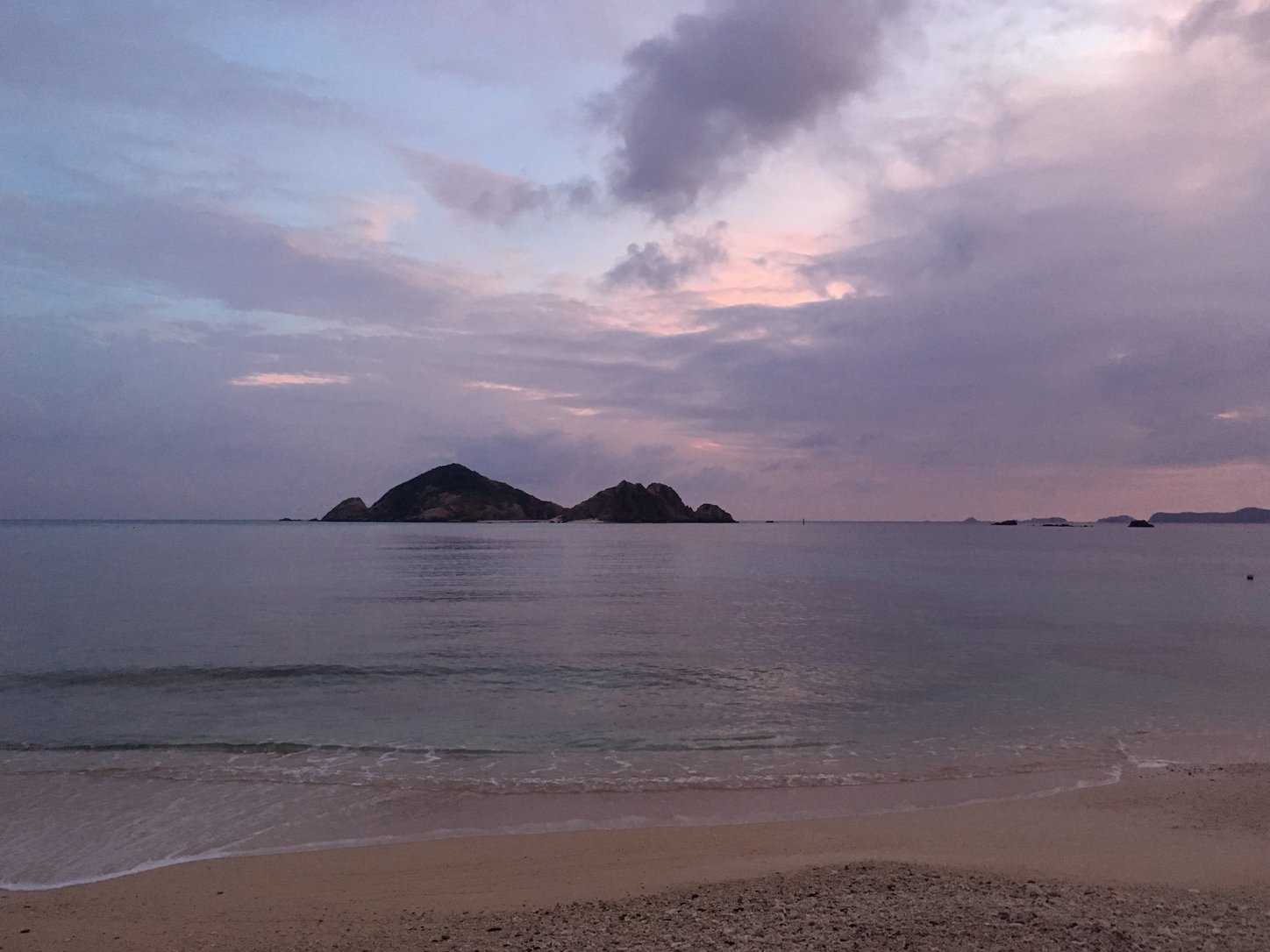 By the time we departed the following morning, we felt like part of the family at the pension, we were on a first-name basis with the 12 cats and their owner who reside next door, and I knew, with utter certainty, that I had at last found my holy grail of islands. If You Get Stuck in Naha…

There’s plenty a tale of typhoons causing the ferry to be delayed or cancelled. Here’s how to keep yourself busy if you can’t leave Naha’s Tomari Port…

Although this UNESCO World Heritage Site was destroyed during the Battle of Okinawa in 1945, it was restored in 1992 and now serves as a symbol of the once prosperous Ryukyu Kingdom. oki-park.jp/shurijo/en

Top tip: Before or after your visit, enjoy a cup of delicious cacao tea at hipster café 1st Coffee Stand, which you’ll spot on the walk from Shuri monorail station. Near to Shuri Castle, this is a traditional Okinawan restaurant. For under ¥1,000 you can enjoy soba served with rice, pickles, fruit, and mozuku seaweed.

Top tip: Make a beeline for the veranda seating, which overlooks a zen-garden-like space. ashibiuna.ryoji.okinawa If there’s one souvenir you must buy, it’s a shisa statue. Pick up a pair of these “lion-dogs” at Naha’s famous Tsuboya Pottery Village, which boasts a wealth of shops selling expertly crafted pottery.

Top tip: Stop for bukubuku bubble tea at Okinawan Café & Gallery Buku-Buku. It’s ¥1,000 for a cup of this traditional tea made from brown rice and jasmine tea, and served with something sweet. www.facebook.com/bukubuku.okinawa

This fun main drag comes alive at night, with colorful taxis blaring music, and souvenir shops bursting at the seams. Do buy: sweet potato tarts. Don’t buy: one of the many cans of spam on offer.

Top tip: For an izakaya-style dinner, head to the food street called Kokusaidori Yatai Mura, which opened in 2015 and features about 20 small eateries. www.okinawa-yatai.jp Grab your tent and bicycle and head to Tokyo’s Takeshiba Pier on a Friday night for a spontaneous long weekend island getaway. The overnight ferry to Shikinejima departs at 11pm, and when you wake, your landscape will have transformed from concrete to jungle.

Although it’s still administered by Tokyo, this tiny volcanic island is 160km south of the capital in the Philippine Sea, and is part of the Izu Seven island group. It’s only 3km by 2.5km, with a population of 600, but if you’re the sort who loves camping, barbecuing, snorkeling, kayaking, fishing, cycling, and perhaps dipping in a seaside onsen, you won’t get bored here. The beaches are small and rocky, but this is all the better for tropical fish spotting. A little closer to home, the white sands of Shimoda on the Izu Peninsula can be reached in just 2.5 hours from Tokyo. The charming little town is surrounded by forested mountains, and its jagged coastline is dotted with so many beaches that you’ll most likely need to return more than once to see them all.

From Izukyu-Shimoda Station, the main and most popular beach, Shirahama, lies to the left. Head in the opposite direction and you’ll be mingling with the surfers on Tatadohama Beach, and the most laid-back of locals on Kisami Ohama Beach. Best way to get around? Catch local buses or rent a bicycle – nothing is really too far away.