Dr. Sheila Cliffe loves kimono. Her passion for it as a legitimate form of fashion is unmistakable and possibly, unrivaled. Not only does she wear it often, but she also published a book on the subject called The Social Life of Kimono in 2017 and helped kimono stylist Akira Times publish his art book Kimono Times later the same year. She also heads the project The Kimono Closet, where she and a colleague interview women about their kimono collections.

It was this venture that inspired her and American photographer Todd Fong — who photographed every interview — to create a style guide using kimono as the central theme. Cliffe would wear a kimono to the interviews — a natural thing to do since the topic was kimono — and Fong would often take photos of her on the way there or on the way back.

These miniature photo shoots sparked the idea for Sheila Kimono Style as Cliffe realized there was a need for a book about kimono as a fashion choice with inspirational coordinates and unexpected accessories. She explains: “There are so many style guides in Japan, but they’re all of Japanese people wearing Western clothes. I thought, ‘why not the other way around?’ And we can include something that’s not apparent in Western fashion and that’s the connection with the seasons. That gave me the idea of documenting ‘a year in kimono’.” A Book to Inspire Young Women

Sheila Kimono Style is a colorful creation with rich, vibrant images of Cliffe in a variety of kimono, settings, and accessories. One coordinate — featured on the cover — displays Cliffe wearing a kimono with a dress shirt underneath, with a bright pink bow tie bringing it all together.

When describing the book, Cliffe says, “This book just has ideas. I think it’s a useful resource as maybe some people haven’t thought about different hairstyles, or bags, and hats. It doesn’t have to be traditional. It makes people see that there are choices.”

It was also important to make the book accessible to many people, which is why it’s a reasonably-priced bilingual book.

As for Cliffe as a style icon, her clout is clear. She became Insta-famous when someone shared her images on Twitter asking, “Am I the only one who doesn’t know about this person?”

After that, her Instagram account grew from 2,000 to 10,000 followers in a matter of weeks. Soon after people started walking up to Cliffe in the street to talk to her. Her image is so entwined with kimono that she jokes that she has to wear kimono when she goes out to stay on brand.

Surprisingly, a clear majority of her followers are young Japanese women in their 20s and 30s. “There is a trend of when people get interested in something Japanese abroad and then they take it on board here. I feel like it’s a bit like that since I’m from abroad and I’ve done quite a few research presentations, then my book was successful abroad. These days I get more invitations to speak at Japanese events from Japanese organizations than international ones. “

Fong adds, “Sometimes it seems like Japan as a country has had low self-esteem. It’s like a national identity issue. I think sometimes it takes foreigners to break the ice and help Japanese people feel more comfortable. That’s how I feel about this book. , too.”

Cliffe agrees. “Yeah, there’s no confidence. Originally kimono is just clothing. In the past, they didn’t have to think about whether it was good clothing or bad clothing. But suddenly when people from abroad start saying, ‘this is nice’ and start wearing kimono, I think it makes Japanese people think about it more and realize that kimono is nice.” To make the project work, Cliffe and Fong spent the whole of 2017 racing around doing 70-80 fashion shoots — sometimes three or four in a day — to include all the seasons and desired styles. The first theme was especially tricky as Cliffe had been abroad for the holidays and came back just as most shrines and temples were taking down their New Year’s decorations. The intense schedule meant that most of the photos had to be taken in a small geographical area. Because of this, the book documents not only the seasons but also a tiny slice of time in a western Tokyo town. Some of the locations photographed only a year ago don’t exist anymore — one grassy area has become a car park, while a house now stands where a cherry tree used to be. Fong mentions that a follow-up book would be hard. “We were kind of limited in terms of location. I think we’ve exhausted just about every place you could possibly shoot here. People have asked us about a sequel, but I think that would be difficult!” While Cliffe’s passion for kimono is clear, we wanted to know if Fong shared that interest.

“Even before moving to Japan I was interested in kimono. I remember San Francisco’s de Young Museum had an exhibition with antique kimono and I was so excited. It was my first opportunity to get up close to kimono of any sort. Since then, I’ve always had this love for kimono and being introduced to Sheila and working with her on her first book (The Social Life of Kimono) was a dream come true for me. It was great to meet someone who’s an expert and is willing to share that expertise,” Fong says.

He was taught how to wear kimono by a mutual acquaintance of theirs. He bought his first kimono soon after and wore at to Kyoto’s Gion. He wears them for tea ceremony practice — another interest — about once or twice a month and is surprisingly cagey about how many he now owns. When Cliffe suggests he owns three or four kimono, he admits to having more, stating, “I have an addiction now.”

Fong explains his love for kimono: “I think it’s a fantastic looking piece of clothing. I just really like the style and I guess like a lot of Asian Americans I grew up with the samurai ideal, so that image is strong. Also, it’s comfortable! A yukata is probably the most comfortable piece of clothing you can wear in summer. I always enjoy that you can go out wearing yukata in Japan with no problem and it’s a shame you don’t have that opportunity in other countries. Though I wish I was better at styling because men’s kimono do seem to be a bit more subdued. I buy women’s kimono remade into men’s because the designs and colors are much nicer. I get them at Fuku Fuku — I don’t know if there are other places like this. Since it’s not easy to find nice ones, when I see one I like I don’t hesitate, I just buy it.” Where to Find the Book

Fashionistas looking for new fusion styles, kimono aficionados, and photography fanatics alike will find something in Kimono Sheila Style to inspire. Even those with little knowledge will enjoy the beautifully curated images and vibrant coordinates the two put together.

Sheila Kimono Style is available on Amazon.co.jp for ¥1,620. Books can also be purchased directly from Dr. Sheila Cliffe or Todd Fong. See their respective websites for contact details.

For more info about Todd Fong and his photography, see www.toddfong.com.
Instagram: @toddfong 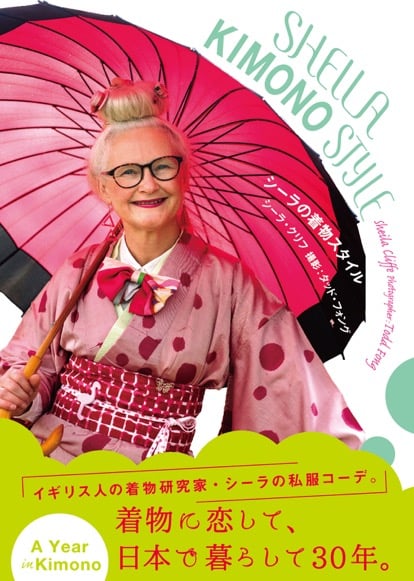