Yokohama is having a moment – in fact, a recent survey showed that young Tokyoites are looking to move to the city. Full of history but also modern and forward thinking, Yokohama was the first port in Japan to open to foreign trade after over 220 years of isolation, and has a rich history of international exchange. With the influx of new people came new products and customs, and Hamakko – the nickname for locals, meaning “child of the harbor” – were some of the first to take on new ideas from the West. As it did, Yokohama grew from a small fishing village to the vibrant destination of innovative art, deep cultural tradition, and creative cuisine we know and love today. To get a taste of Yokohama’s fusion of historic past and sparkling future, we’ve rounded up five places to enjoy a historic atmosphere while you dine. THE STORY: Originally the property of an American public prosecutor, this charming residence-cum-café was designed by Japanese architect Yoshizo Asaka, famous for his interpretation of Western-style architecture. It was built in 1927 and remains one of the few original Western-style buildings in the Yamate area.

WHY WE LOVE IT: The dining area on the first floor is scattered with delightful antiques — some over 150 years old. The outdoor terrace area with its verdant greenery is perfect for people watching in the shade. Furry friends are welcome to join in the fun in this outdoor area. There is a private room on the second floor available for bookings of six people or more, which comes with an exclusive afternoon tea set.

WHAT TO TRY: Fill up on one of two mainstays: rare cheesecake or scones. Both desserts use the same original recipes that can be traced back to when Enoki-tei opened as a café. The rare cheesecake comes with a choice of three different toppings: cherry sauce, blueberry sauce, or fresh cream. The scones come in plain or with currants, and are served with sour cream and apricot jam. THE STORY: Part of an effort to use historic buildings to breathe life into the art and culture scene, Café Omnibus is located inside what used to be the Yokohama Branch of Dai-ichi Bank’s lobby. Part of the building was constructed in 1929 and also houses the YCC Yokohama Creativecity Center, which features frequent exhibitions, workshops, and shared office spaces for those who enjoy working in creative environments..

WHY WE LOVE IT: A fusion of traditional architecture and contemporary design, Café Omnibus is blessed with high ceilings and large, arched windows, making it a bright area with room to relax. Dotted around the café are five food carts – each one conceived by a different designer – that emphasize the space’s dedication to creativity.

WHAT TO TRY: Café Omnibus has an impressive selection of voluminous sandwiches, packed with veggies galore. One of the most distinctive is a ham sandwich with marinated red cabbage, yogurt sauce and mango slices. For a selection of the best offerings, check out the Deli Plate of the Day. THE STORY: The ryokan started as a restaurant tucked away in Tokyo’s Shinagawa ward under the name of Kanazawa-en and was moved to Yokohama in 1930. It was registered as a Tangible Cultural Property in 2004 for its use of traditional architectural techniques using joinery and no nails. You’ll find Café & Dining Botan inside the ryokan, with a stunning view of exposed wooden beams above.

WHY WE LOVE IT: Recently renovated, Kitaya Ryokan retains much of its original charm and makes good use of its space – it features hostel-style lodgings, as well as the restaurant and café. The beach is only a five-minute walk away, and Shomyoji Temple about 13 minutes away, making it the perfect place to spend an afternoon exploring after lunch. For those who want to stay longer, simply stay overnight.

WHAT TO TRY: The lunch gyunabe course (gyunabe is the precursor to sukiyaki and was first conceived in Yokohama, where it retains its original name) with plenty of vegetables and mushrooms – and of course, tender slices of beef. The course comes with a soup of the day, rice, and a homemade dessert. The restaurant offers chicken as an alternative to beef, but only if you let them know in advance. Reservations for the restaurant aren’t required, but are recommended as seats fill up fast.

THE STORY: Celebrating its 90th anniversary in 2017, Hotel New Grand is the oldest hotel in Yokohama. It is the origin of Japanese and Western fusion culinary classics such as Spaghetti Napolitan, Japan’s first seafood gratin, and most likely the world’s first purin a la mode. It also hosted General MacArthur twice – once on his honeymoon and again after the end of World War II.

WHY WE LOVE IT: Le Normandie’s sophisticated and elegant interior is reminiscent of a dining room on a luxury liner – and it’s entirely intentional. It was designed by Pierre-Yves Rochon, who was inspired by the ocean liner SS Normandie. The restaurant is at the same height as one of the liner’s decks, allowing for unobstructed views over Yamashita Park, and the harbor and ocean beyond.

WHAT TO TRY: Le Normandie prides itself on providing authentic Western fare, but a touch of fusion may be best – their steak marries tender Japanese beef fillet with a smooth Madeira sauce to add some character. The dessert du jour changes regularly, but is always worth asking about. 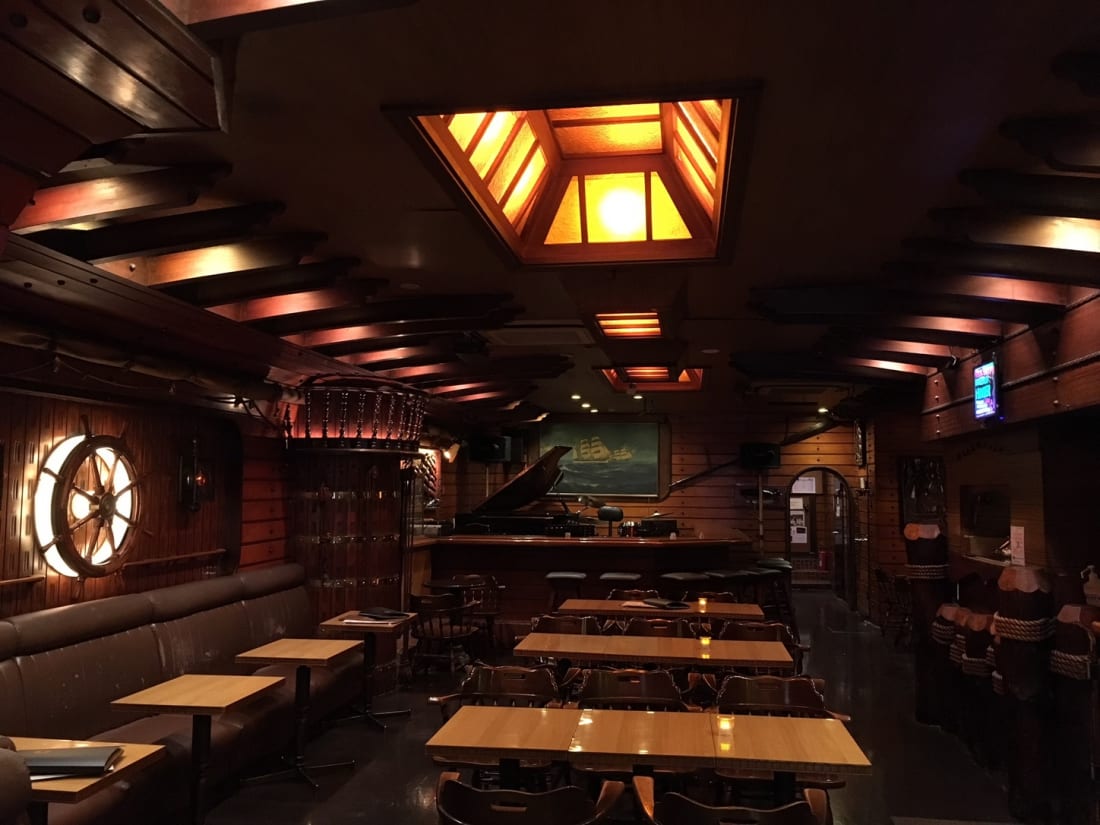 THE STORY: A stone’s throw away from Chinatown, Windjammer is the pulse that keeps the Yokohama live jazz music scene alive and kicking. Opened by American Jimmy Stockwell in 1972, it’s now run by his son, Jeff. It continues in the same vein, offering nightly live performances by the house band and an abundance of great food and drinks.

WHY WE LOVE IT: With about 2,000 cocktails on the menu – over 200 of them Windjammer originals – you’ll be spoiled for choice. The interior reminisces of an old sailing ship – hence the bar’s name – as it’s decked out in wooden rails, old sails, and flickering lanterns. It looks so authentic you can almost feel the place rocking on the ocean – then again, it may because you’ve had one too many delicious cocktails.

WHAT TO TRY: Jack Tar is Windjammer’s most famous original creation – it features a rum base with a hefty serving of Southern Comfort and fresh lime juice. To eat, we recommend the Captain’s Burger, which is a monster 30cm in diameter, and is as delicious as it is big – it’s perfect for sharing if you just want a bite, but still manageable if you want to keep it for yourself. Also, the nachos have a superb sauce.