Nigiri-sushi – currently the most popular form of sushi, which consists of hand-pressed fingers of vinegared rice and a slice of fish – was invented relatively recently. In 19th-century Edo (today’s Tokyo), it was a cheap fast food sold from food carts. In earlier centuries, rice had been seasoned with salt rather than vinegar and had served to preserve the slowly fermenting fish. Despite its humble origins, after World War II sushi gained the status of haute cuisine enjoyed in specialized restaurants (sushi-ya), and the preparation of rice and other ingredients has been elevated to the form of art. In the restaurant of Jiro Ono – perhaps Japan’s most famous sushi master and the hero of the documentary Jiro Dreams of Sushi – the training of chefs takes 10 years! There are of course cheap conveyor belt kaiten-sushi, but these are considered the equivalent of McDonalds.

So how to behave if you end up in a real sushi-ya?

When ordering, you will have the choice between okimari (a set menu), okonomi (ordering a la carte), and omakase (leaving the choice to the sushi master) – the last option is of course the most dangerous for the wallet. Depending on the option you choose and the class of the restaurant, sushi pieces will appear on your plate gradually or you will receive the whole set at once. In the latter case, the most expensive sushi piece (such as bluefin tuna or sea urchin) will be traditionally placed in the upper-left corner of the plate and the least expensive one (such as egg omelette) in the bottom-right corner. This does not necessarily reflect the order in which sushi is to be eaten – typically from leaner to fattier fish. Notice that sushi pieces will be tilted to the left, so that it’s easier to pick them up with your right hand.

And how to eat sushi?

—It is perfectly fine to eat both nigiri-sushi and maki-sushi rolls with your bare hands – even in the best restaurants. Before the meal, you will certainly be given a damp cloth, or oshibori, to wipe your hands. But beware: sashimi (slices of raw fish) and gari marinated ginger are to be eaten with chopsticks only.

—While your parents may have told you not to stuff your mouth, sushi is supposed to be eaten in one bite. This will allow you to fully appreciate the perfect proportions of rice, fish and a centrally placed pinch of wasabi. If you do not manage to put the whole thing in your mouth, the half-eaten piece should not be put back on the plate before the next bite. 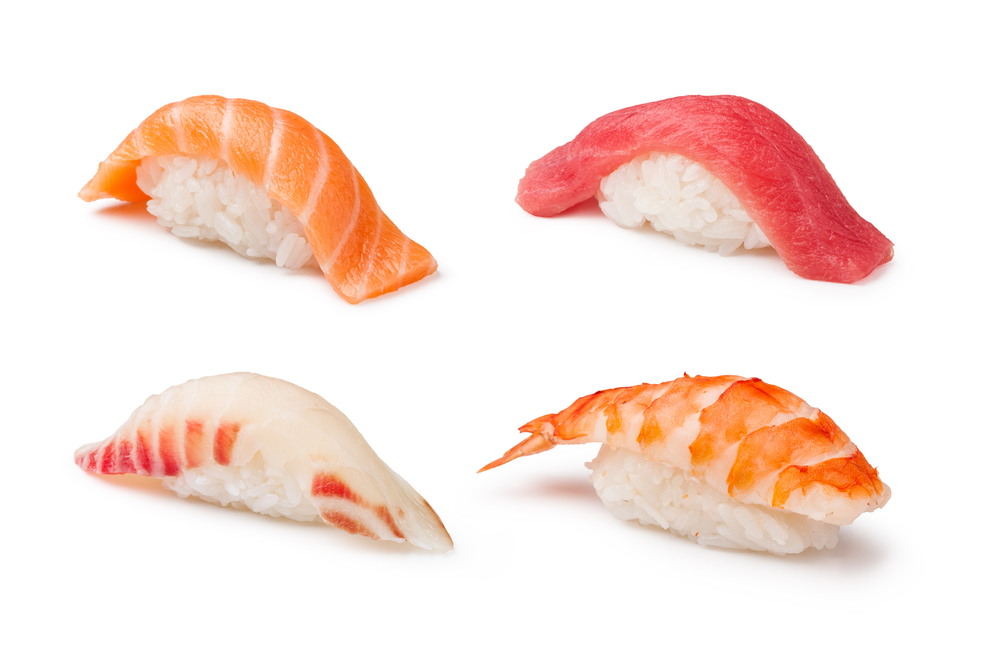 —Be careful with wasabi! The sushi master has already placed what he thought was the optimal amount underneath the fish.

—Soy sauce should be used very sparingly too! Pour a tiny bit into individual saucer, making sure to dip only the fish side of the sushi into the soy sauce. It will be easier if you flip the sushi piece to the left or separate the fish (with your chopsticks) from the rice for a second. Don’t use soy sauce with eel, mackerel and other fish that has already been seasoned. Above all, avoid dipping the rice, which would soak too much of soy sauce and thus not only fall apart but also distort the taste of the dish.

—Marinated ginger is a palate cleanser and should be eaten between bites of different types of sushi. Placing it atop the sushi is considered bad manners.

—Sushi is best accompanied by green tea or beer. Sake is traditionally not served with rice-based dishes.

And finally a couple of more advanced rules, courtesy of Junko Tsukitani – the director of the Japanese Foodstyling Culture Association – who explains that even many Japanese are not aware of these etiquette points: Using your bare hand to catch any falling grains of rice or drippings is a no-no. Instead, be sure to hold a small plate, a bowl lid or a piece of kaishi paper (traditionally used for placing sweets during the tea ceremony) as you transfer sushi pieces to your mouth. Interestingly, these utensils should be picked up with both hands and then transferred to your left hand before you reach for the chopsticks. The reverse order applies when putting things down – that is, first lay down the chopsticks (on a special chopstick rest or across the soy sauce bowl) and only then the plate, making sure to hold it with both hands.

(Once you’ve learned how to eat sushi properly, you might be tempted to learn how to make it yourself in this sushi-making course!)