We arrived just in time to catch a glimpse of the sweat, blood, and tears that go into making the high quality products Japan is known for worldwide. Just a two-hour shinkansen trip from Tokyo, Niigata’s Sanjo and Tsubame cities – which are technically two separate municipalities, but are often branded as one – are famous for their metalworking, with the region’s artisans being particularly known for their innovation and dedication to their craft.

The region’s industry can be traced back to humble beginnings, when only a few lone craftsmen made wakugi (a Japanese-style nail) during the Edo period, and recently there’s been a move to connect the artisans directly to their customers through factory tours and events. The idea is that through witnessing the labor-intensive process behind crafted items, customers can gain an understanding into their creation. We decided to try out craftsman life for ourselves at Sanjo Blacksmith Training Hall, a facility that opened in 2005 with the aim of keeping traditional techniques alive. It also offers metalworking lessons to laymen. With our hearts set on making a letter opener from a nail, we set to work. The fire was blazing hot, the tools were heavy, and our aim was off. Our teacher, craftsman Takashi Matsuhira, gave a helping hand which was simultaneously awe-inspiring and demoralizing. He hammered everything out in mere seconds, while it took us several long minutes. With his guidance, we made a katana-shaped letter opener that was as beautiful as it was sharp. Next, we headed over to Suwada Blacksmith Works, where their open factory featured large windows and zoomable TV screens which allowed us to get a closer look at what was going on behind the glass. One of the craftsmen on site, Hideo Kobayashi, is 85 and has been working in the industry since he was 15. He listens to Bach as he works. Though many like him are veterans, there are increasing numbers of younger people joining their ranks. Starving after our not-so-hard work, we headed to Chinese restaurant Taikanro for some typical Sanjo soul food: curry ramen. The spicy, thin soup was served with thick-cut fries lurking among the noodles – an unexpected but not bad combination. Afterwards, we stopped by Kitaimogawa terraced rice fields to take in the stunning view over the steps of green while sipping on delicious fresh mountain spring water – straight from the source. We settled in for the night at a delightfully secluded – and we mean secluded – ryokan perched next to the Sumon River, called Rankeiso. This roughly 100-year-old inn would fit seamlessly into a Ghibli movie. There’s nothing like drifting off to sleep to the sweet sound of silence… Starting the day at Tojiro Co., Ltd, we learned that craftsmen here spend over 10 years perfecting their knife-making skills. Some blades are the sole responsibility of one lone artisan and it takes them 30 to 45 days to make one knife. The final touch is the name of the company hand engraved into the blade – just like sword makers did back in the day – leaving a distinctive style so that the knife can be traced back to the person who made it. After tucking into lunch at Koushuhanten, a popular local joint serving seabura (literally “back fat”) ramen, our last stop for the day was Gyokusendo, famed worldwide for its hand-hammered copper kettles. While many machine-made products are at their prime when a customer receives them, copperware becomes more beautiful starting the moment the customer lays their hands on it. The lustre continues to develop as it’s used over generations.

In a rustic, 100-year-old house-cum-workshop, we watched a handful of artisans rhythmically beat sheets of copper into shape. As one artisan melted some silver in a fire, we took a moment to appreciate the skill, time and dedication required for these beautiful products we choose to place in our homes. 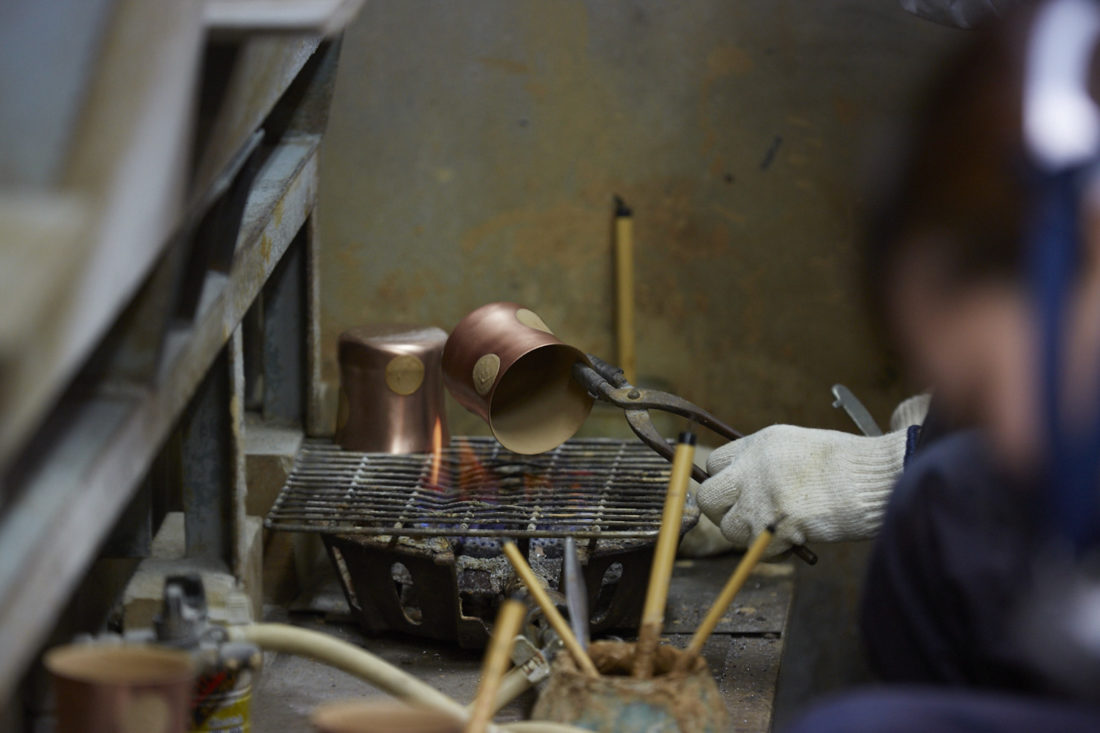 Four More Things to Do in Sanjo-Tsubame

1. Meet Some Miso
Perfect for foodies, Echigo Miso does tours of their miso-making process in an Edo period building. www.echigomiso.co.jp

2. Whittle in Some Woodwork
Marunao is a company now in its third generation – they started with decorative adornments for shrines and temples, moved to tools for tradesmen, and they now focus
on chopsticks. www.marunao.com

3. Shop ‘Til You Drop
You’ll find wares made by all the manufacturers we’ve mentioned and dozens more at the Tsubamesanjo Regional Promotional Center, a mecca for all things locally produced.
www.tsjiba.or.jp/en/shopping

4. Dine Like a Nobel Laureate
Only a few can nab a coveted seat at the annual Nobel Prize Banquet, but restaurant Messepia offers diners the chance to at least enjoy a meal with the same prestigious cutlery used in Stockholm. (Located inside the Tsubamesanjo Regional Promotional Center, see above.)

If you can’t make it all the way to Sanjo and Tsubame just yet, then head to the Tabisuru Shintora Market at Toranomon Hills to join a workshop and shop for Japan-made crafts from Niigata. Click here for more details.