Last week, the prolific 87-year-old Japanese artist opened two exhibitions simultaneously – a retrospective in Tokyo called “My Eternal Soul,” and another show in Washington D.C. called “Infinity Mirrors.” You’re lucky if you can see both (they’re on until May), but if you can only catch one of them, here’s why the Tokyo show is worth your time.

Even if Yayoi Kusama has not been on your radar, once you hear her story, she’s impossible to ignore – not only because of the wealth of art she continues to produce as she nears her 90th birthday, but also because her art is so much more than just a passion: it is her lifeline.

By her own admission, she had a “miserable childhood,” and longed to escape her “unfaithful” father and “angry and violent” mother. In a 2016 interview with The Guardian, Kusama said her mother “did not want me to be an artist. When I left for New York, she told me never to set foot in her house again.” After studying art in Kyoto, Kusama was encouraged by a letter from Georgia O’Keeffe to leave Japan and head to America. It was 1957 and she immersed herself in New York’s avant-garde art scene, taking part in Happenings (experiential art events in which Kusama would often perform naked), and exhibiting paintings and sculptures.

Her trademark polka dots were already part of her style back then, although at the “My Eternal Soul” exhibition, you can also view some of her works from this era that are significantly different in style and medium – including multiple sculptures covered in phallic protrusions, which she referred to as her “Sex Obsession Series.” As with any artist renowned for a specific style, it’s fascinating to track her progression from her late twenties to her current period. 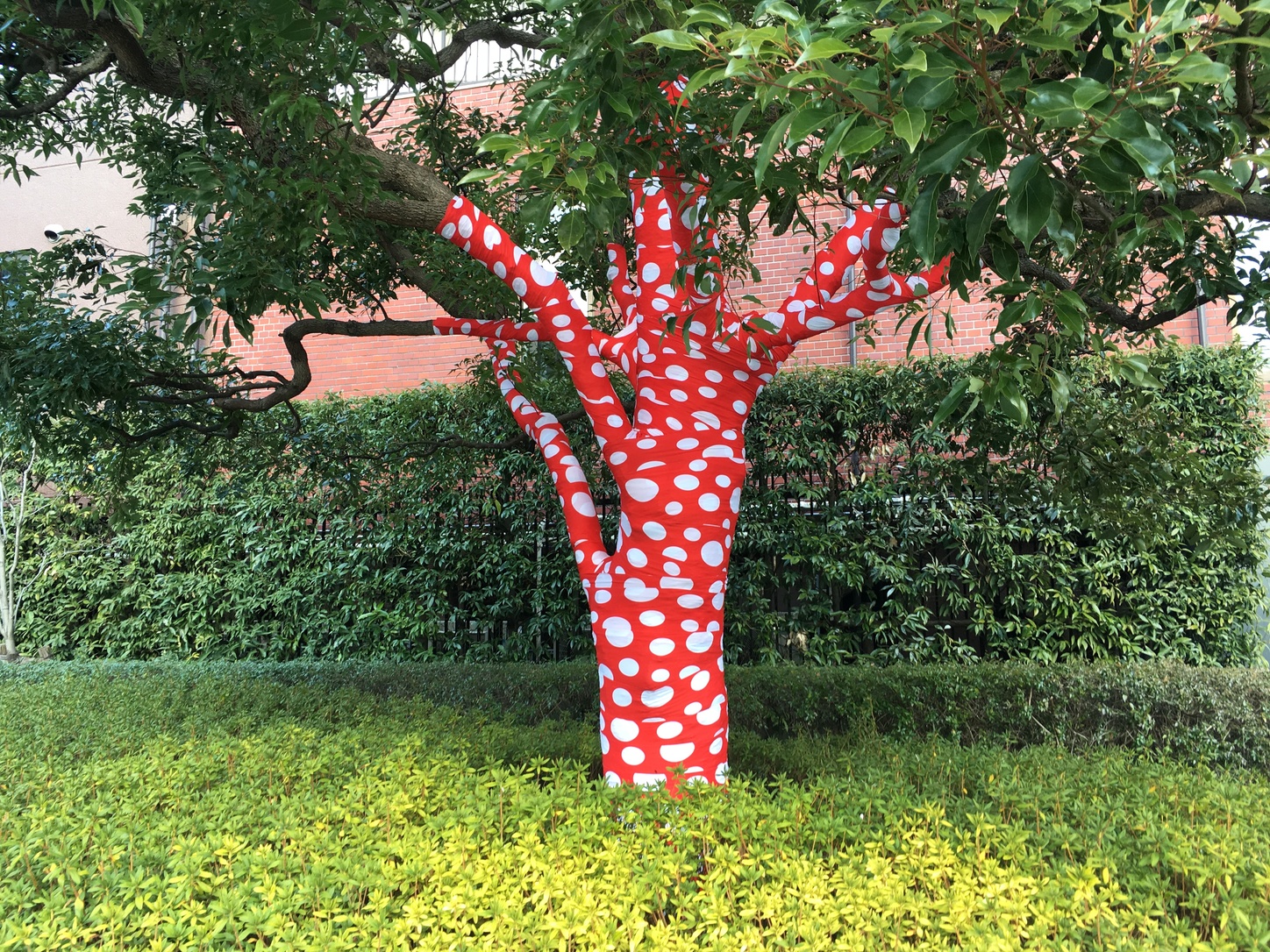 At the entrance to the National Art Center in Roppongi, even the trees have been Yayoi Kusama-fied The main hall at the exhibition is filled with wall-to-wall paintings, and one of her bright sculptures

Kusama began drawing polka dots from the age of 10, and she has openly stated that she started experiencing hallucinations and anxiety attacks from a young age too. When you stand in the main exhibition hall at the National Art Center in Roppongi, and take in the walls filled with clashing colors, bold dots, and recurring shapes that look like eyes, you can almost imagine what the inside of her mind is like.

It’s especially poignant when you walk through the “Infinity Mirror Room,” which is a passageway filled with mirrors reflecting an endless display of colored lights. Kusama first started creating her Mirror Rooms in 1965, and the space allows the viewer to have a perceptual experience of her artwork. It also reflects the artist’s ongoing themes of life and death.

In 1973, Kusama returned to Japan, and a few years later checked herself into the Seiwa Hospital for the Mentally Ill. By choice, she still resides here, but paints at her studio across the road every day. Perhaps one of her most well-known quotes is “If it were not for art, I would have killed myself long ago.”

And when you take in the massive body of work on display at “My Eternal Soul,” which is only a small percentage of what she’s created in her lifetime, you cannot help but admire her for being so determined to find a way through the everyday struggle. It’s fascinating to see her earlier works, and track her progression as an artist Get 10% OFF Round Trip Tickets between Osaka and Naoshima
For an extra 5% off use our coupon code TOKYOWEEKENDER during check-out.