Blood, sweat and tears: essential ingredients for any filmmaker interested in the macho world of pro-wrestling.

New documentary film Doglegs contains these elements in abundance, but that’s where the similarities with what you know of the sport end. The wrestling league the film is named after is populated not by your typical pumped-up, spandex-clad performers, but by men and women with both physical and mental disabilities… severely so in many cases.

So, handicapped pro-wrestling. What to make of such a spectacle? New Zealand-born filmmaker Heath Cozens set out to investigate in 2010 and this award-winning film is the result. Currently touring the country, Cozens’ work aims to document the rollercoaster of emotions and conflicting feelings that the Doglegs show generates in audiences. Challenging preconceived notions of what the physically impaired are capable of and how it is they should be treated, the film can leave viewers feeling like they’ve entered the ring themselves. Despite the presence of the bruising, brutal matches, touching moments of humor and heart occur as the film delves into the lives of the stars of this unique spectacle. Following several fighters both inside and outside of the ring, the star of both the film and league is “Sambo” Shintaro. Struggling to improve both his work and love life, Shintaro aims at wrestling retirement, but not before beating fellow co-founder and nemesis of twenty-years ‘Antithesis’ Kitajima. Kitajima is able-bodied, but that doesn’t mean he’s ever gone easy on his best friend. When the bell rings, the gloves come off. The film’s director explains:

“Kitajima turned into a real beast in the ring when he did fight and I think there were a lot of repressed feelings and a lot of stuff that’s hard to put into words. It’s not only a physical battle between them but also an ideological battle. Kitajima believes that there’s a lot of lip service given to disabled people being able to do anything “If only you try you can be equal to the able-bodied.” He doesn’t really buy into that; he thinks it’s disabled people being sold a false dream. It’s like when you’re a foreigner in Japan and someone says, “Oh, your Japanese is so great” when you know it’s not. It’s the same thing with disabled people to sort of brush them off and not take them seriously. So I think for him it was “Well, if he’s (Shinatro’s) going to challenge me to a fight I’m going to give him my best. I’m not going to pretend to let him win because that would be condescending, that’s not actually giving him a taste of the real world.” In a weird way it’s also Kitajima expressing his love for Shintaro. That he would actually go that far to be seen as this freaky dude who beats up the disabled. To actually go in there and beat on somebody that he cares about is weird, contradictory, and painful for him on some psychological level. And that’s something that Japanese people really pick up on, they realize it’s an expression of love in a weird kind of way.” 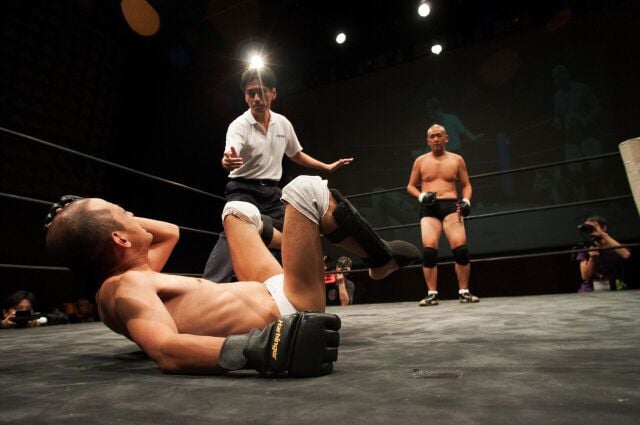 Shintaro Yano, ring name “Sambo” Shintaro (below) and Yukinori Kitajima, ring name “Antithesis” Kitajima (above), do battle. Shintaro, who has cerebral palsy, is the star of Doglegs — both the league and the film. Able-bodied organizer Yukinori Kitajima first entered the fight when challenged to a fight by Shintaro over twenty years ago. Since their first match the group has grown to include a roster of both disabled and able-bodied fighters. The film explores the complex friend-or-foe relationship between the Shintaro and Kitajima, and the build-up to their final showdown. NB: In mixed-ability matches such as this one, Doglegs often institutes special rules or places physical restraints on able-bodied participants. Fights between these two old frenemies are a marked exception. Credit: Alfie Goodrich

When pressed on how it is an able-bodied man can enter a ring and beat up on a disabled person, Cozens relates how it was Shintaro’s actions that first got the group going, “Shintaro was the one who challenged Kitajima to a fight originally. Basically Doglegs started out with Shintaro. He fell in love with a woman and there was another guy fighting for her attention and they ended up taking it to a physical level. To see them joyfully lay into each other seemed like a way for them to release stress and also act as a kind of self-affirmation of their existence. To stand up there and sort of be proud and fight and express themselves physically in that way.”

When it comes to Doglegs, Shintaro’s reason for fighting, his ideology, is quite different to his best friend: “Shintaro was put through the normal school system with able-bodied kids, so he comes from the belief that disabled people can be equal to the able-bodied and that’s sort of his expression of that. He’s saying, “I’m not going to subscribe to your view of things either, Kitajima.” So it’s kind of this weird physical manifestation of that.”

Joining Shintaro in the card are two fellow fighters. L’Amant suffers from severe cerebral palsy and a fondness for chugging cups of sake. His wife takes care of him in the home and body slams him in the ring. Yuki Nakajima has beaten cancer but his biggest battle is with clinical depression. Still, reasons for stepping into the ring always seem to come down to proving a point:

“Shinatro and L’Amant, there’s not much really they can do, especially depending on the fight and the opponent. If you can’t really lay in the punches then what you can do is standup and sort of take em’ like a man and not bend and keep on getting back up. I guess they just wanted to demolish these expectations about how disabled people should behave and how they should be treated. They’re not wilting violets. An able-bodied person may look at someone with a disability and flinch and think, “ouch, that looks painful,” that kind of thing. But to really get up there and fight shows you’re not willing to be defined by peoples expectations” 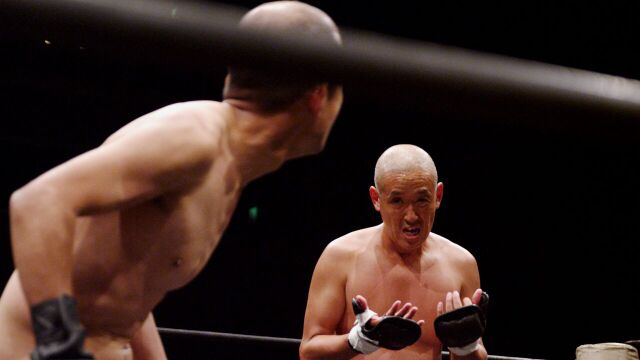 Antithesis Kitajima (R) and Sambo Shintaro, the hero of the film, in the film’s climax. Shintaro challenged Kitajima to one last fight – Kitajima accepted on one condition: “the winner gets to retire”. The two men have had a complex 30-year friendship that traces its roots back to the groups’ inception. Credit: Paul Leeming

While the fighters themselves may find it cathartic to stand up and be counted in the squared-circle, there’s a strong message being delivered to the audience: “Kitajima’s stated goal was to entertain but leave a bad taste in the audience’s mouth. He wanted to do that because with a standard show you watch it and go home and forget about it and it’s like, what is the point? So he always tried to not only entertain, but also to provide shock and a variety of emotions. At the end of the day disabled peoples lives do have challenges that we can never really understand. That’s the message Kitajima was trying to inject. Don’t condescend and don’t pretend to know what’s going on.”

Cozens describes filming the matches as “very emotionally potent. There were scenes when I was filming were I was trying to hold back the tears myself but there were also other moments were I was fighting to hold the camera steady because I was laughing so much!”. Following in the lives of the films stars audiences get to participate in a similar tour across the emotional spectrum. But what does Cozens want viewers of his film to take away from the experience?

“…I would like the audience to take away questions. Basically I’m trying to replicate the experience I had when I first watched Doglegs. That is an emotional rollercoaster where you are oscillating wildly between these extremes of humor and shock and empathy and alienation all those feelings mixed up together. Knowing that you are reacting strongly to it but not knowing what it all means. For me it was a real experience, a real journey to look inside myself and take them apart and try to work out why I was feeling the way I was. A lot of the time, you know, you’re shocked. Well, why? What is it about this that’s shocking? You have this almost allergic reaction to it, but why? I don’t know I think a lot of the feelings in my case stemmed from a slightly typical, caring, lefty, urge to say “This can’t be right! They’re being abused!” That kind of calcified way of thinking that doesn’t really give agency to the people who are getting out there of their own volition.” Doglegs can be found in select cinemas, with English subtitles, now. Check the website for details: http://doglegsmovie.com/