Hailed as his magnum opus, Takashi Murakami’s “The 500 Arhats” is a massive undertaking, both in scale and intention.

An internationally-minded and acclaimed artist, Murakami has exhibited his works to an astounded global audience and now brings a highly-anticipated solo exhibition for the first time in 14 years to Japan, with his remarkable 100-meter-long masterpiece. Born and raised in Tokyo, Murakami became the first ever recipient of a PhD in Nihonga (Japanese-style paintings) from Tokyo University of the Arts’s School of Fine Arts. He’s best known for being the father of “Superflat,” a post-modern art movement informed by manga, anime, otaku culture and Japanese art history. His canvases are eye-poppingly vibrant, saturated with color, imbued with creepy cartoonishness and cultural symbolism.

Murakami created “The 500 Arhats” as a token of gratitude to Qatar, in recognition of their timely response efforts and aid following the Great East Earthquake and Tsunami of 2011. Inspired by Edo-period paintings and conversations with art historian Tsuji Nobuo, Murakami enlisted the help of some 200 art students from Japanese colleges to complete the work, which is divided into four sections, each bearing the name of one of four Chinese guardians of the celestial directions. This collaborative effort touches on themes of religion, human mortality, gratitude and interconnectedness. It is truly a monumental contribution to global art history.

“The 500 Arhats” was previously exhibited overseas, but as was revealed at a press preview and briefing on Friday, the piece has been continuously evolving and only recently was officially completed, following some final touches by Murakami. The Mori Art Museum’s exhibition will therefore be its global debut as a complete work.

While there’s no doubt “The 500 Arhats” is the star of the show, there are a variety of other works from various phases of Murakami’s career also being exhibited. Large scale sculptures such as “The Birth Cry of a Universe” and “Flame of Desire” also feature alongside his earlier abstract works and a series of the wild “Mr. Dob” artworks (a sharp-toothed, maniacal character invented by Murakami, and inspired by anime and manga). Of particular interest is the way in which Murakami developed his depictions of “Mr. Dob” over the years, from the early 1990s until the present day – perhaps an insight into his own artistic vision. So fresh is the most recent “Mr. Dob” piece in the exhibition, delivery to the gallery was delayed until late the night before the press preview event: Murakami was still working on it up until the last possible moment. 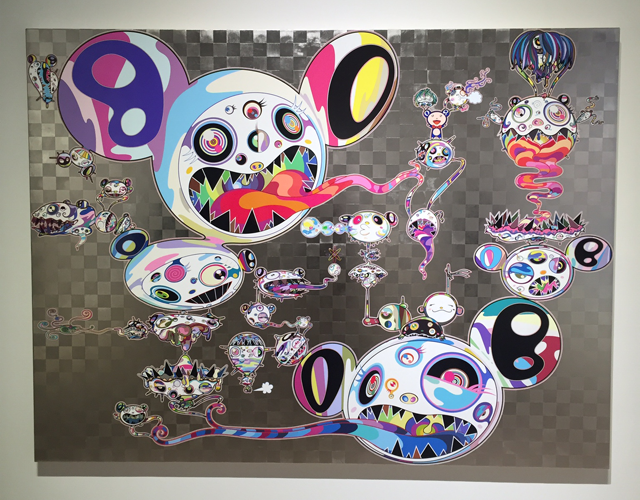 Oh, and if you were wondering if there are actually 500 arhats in the artwork, we have been assured that there are. Murakami ensured there were two or three assistants consistently monitoring progress and counting as the piece grew and grew. Take our word for it, or go along and count for yourself!