Fancy a sweet treat? Doughnuts always hit the spot, probably due in part to their comforting nature and high-fat, high-calorie count. In the recent years, doughnuts have become increasingly popular in Japan, no longer only limited to Mister Donut chains. Between the American brands and local concoctions, we went through the difficult task of tasting as many doughnuts as we could in a short amount of time to bring you this round up. Which one do you prefer? Since January of this year, the convenience store chain has ventured into the doughnut territory, selling what looks a lot like Mister Donut replicas. At ¥100 a pop, they’re difficult to resist, especially after a late night working (or partying), when no actual Mister Donut shops are in sight.

About five or six kinds are on display at any given time, depending on availability: whipped cream, puffy ring, strawberry ring, old fashioned, honey, and chocolate dipped. The strawberry ring boasts the same mochi mochi (sticky sticky) consistency as the more famous Pon de Ring popularized by (once again) Mister Donut, but we’re not complaining here.

While the doughnuts make an excellent companion to 7-Eleven coffee and are just so extremely convenient and cheap, they’re sadly not as fresh as they should be, and definitely do not have that melt-in-your-mouth quality.

pros: doughnuts at any time or place of the day, cheap

cons: a tad stale, trying too hard to be Mr. Donut Many people go to Streamer for their creamy lattes and elaborate coffee art by award-winning owner barista Hiroshi Sawada, while others go for their “fly-off-the-rack” military doughnut. That’s right, get there early as they’re usually sold out by midday. The sinful, camouflage-themed concoction is a blend of chocolate, caramel, green tea and white chocolate. It’s rich, heavy and buttery, and its cake-like consistency makes it deliciously filling.

If you’re courageous enough, you can pair it with the latte of the same name and flavors, but if you decide to go down the military road, go with one or the other. Besides its infamous creation, Streamer is a nice, hip spot to hang out, although we’re still bitter they took away the free wifi. Mister Donut never fails to please. From the rows and rows of different flavors and the special edition offerings (cotton snow candy for the summer, anyone?), to the limited collections (matcha, banana, strawberry lines) and ¥100 sales, we keep going back to this neighborhood staple.

Not only are their doughnuts tasty, but Mister Donut shops are a pretty sweet spot for hanging out. Many of the branches have undergone a facelift in the past year or so, and they’ve become non-smoking, Starbucks-like spaces. And did we mention the free coffee refills?

The Pon de Ring is Mister Donut’s most famous offering. The treat is shaped just like the store’s mascot, Pon de Lion, with the signature ring-shaped mane. The texture is called mochi mochi, which is a combination of soft and sticky. They come in different flavors, but the original one is simply honey-glazed. It costs ¥140, but it’s often on sale for ¥100. The doughnuts are usually all very fresh and rarely disappoint, and offer a good selection of the classics (custard, whipped cream, chocolate).

Although Mister Donut started out as an American fast food franchise, it is now headquartered in Japan, and is the largest operating doughnut chain in Japan. It has a strong presence all over Asia.

cons: we can’t really think of any Back when Krispy Kreme first opened its Japan branches a few years back, they had people queueing for about a year—the equivalent of today’s popcorn shops on Omotesando. Thankfully the queues have subsided, now that most people have had a taste of the American goodness, but it’s still very popular. The chain is not as widely spread as say, Mister Donut or 7-Eleven, and it’s usually found in trendy shopping areas (not so much in local neighborhoods).

What can we say about Krispy Kreme doughnuts? They have to be some of the most delicious, soft, melt-in-your-mouth creations. Truth is, we rarely stray away from the Original Glazed, as nothing beats it, but their seasonal offerings and other flavors such as old-fashioned chocolate can be interesting—that is, if you don’t think about the number of calories and fat contained in each piece. Krispy Kreme shops are usually quite spacious and are a nice place for a break, with an ample selection of equally sugary iced drinks.

The only thing we do not approve of is the savory line, which includes a tuna-filled number. No, thanks.

pros: too good for words

cons: lost a point over the tuna doughnut Antendo bakeries are located all over Tokyo and Yokohama, usually found inside train stations or just outside. They’re a pretty standard Japanese bakery, offering a rather large selection of sweet and savory baked goods, ranging from croissants, pain au chocolate and bagels to cheese bread, curry pan and ready-made sandwiches.

While they don’t exactly specialize in doughnuts, one of their creations is actually worth a stop if you see one of their branches. It’s a tofu-based doughnut, lightly glazed with honey and adorned with a flowery design. A very light baked treat, it makes for a decent breakfast on-the-go.

cons: hits the spot, but it’s no KK 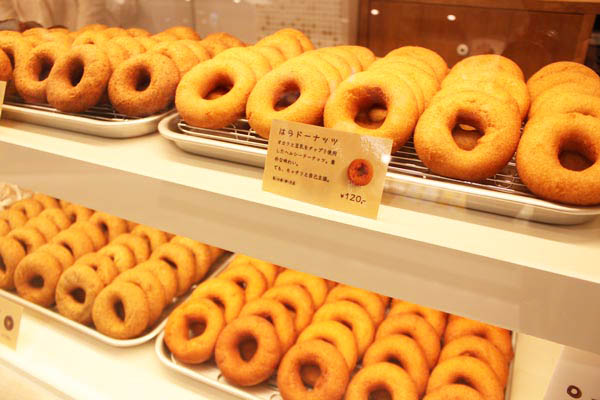 Hailing from Kansai, this chain has outlets all over Japan, including a dozen in Tokyo and Kanagawa. Every shop is different and unique, but they’re all equally cozy. Hara is the kind of place that won’t make you feel guilty about indulging in more than one or two pieces: all the doughnuts are made using okara—soybean pulp—and soy milk straight from the Nara tofu shop. How can you possibly feel sinful after tofu?

Flavors include the original Hara recipe, which is similar to an old-fashioned doughnut, as well as kinako (soybean flour), Okinawa sugar cane, chocolate, white chocolate, tea, lemon tea, ginger lemon, and perplexing varieties such as spinach, sweet potato and carrot. Most of them are priced around ¥160 and the size is fairly small, which means it makes it okay to eat a few.

Hara is probably the best place to hit if you’re looking for something homemade and delicious—all the flavors we tried are equally wonderful. The only downside is, there aren’t enough branches!