Bigger Than Life: A Macro Photography Excursion in Yokohama

There’s a wildlife reserve that’s walking distance from where I live in Yokohama. It’s called Enkaizan Omaru Yama. This location is one of those off the beaten paths that you won’t find in glossy covered tourist magazines, and that’s fine with me.

Text and pictures by Stack Jones

I decided to shoot Enkaizan Omaru Yama with one of Nikon’s most talked about lens, the AF-S VR Micro-Nikkor 105mm f/2.8G IF-ED. I received it for free, as a points purchase from Yodobashi, my reward for buying a lot of photography equipment from the electronic chain. I’d also be using Nikon’s D800, and set some fun shooting rules.

All shots were to be handheld. I didn’t want to spend time setting up a tripod, hoping I’d get a good shot. I once spent two entire evenings in Del Mar, California shooting large bumblebees that frenetically swirled around the oceanfront cliffs that were covered in wild lavender. I used a tripod, and the experience was tormenting. The bees weren’t cooperating. Waiting around in a static position, hoping for all of the stars to align to get a spectacular shot is not one of my greatest strengths.

I also wouldn’t be using a technique known as stacking, which is where one takes several shots with different focus ranges, and later bring those images into software to piece them together to achieve what would appear to be one single sharp image. Finally, I would limit each subject to three shots. The lighting situation would be low, as Enkaizan Omaru Yama is covered in a thick canopy of sprawling branches, and fresh summer leaves. I was curious how well the celebrated vibration reduction of the lens held up under such conditions.

Before shooting, I performed a ritual that I do if I have the option: I go to the location without a camera, and explore the area. This isn’t as easy as it first seems, as weather is fickle in Japan.

On my first visit, I discovered a steamy environment teeming with insects, and other forms of wildlife. The terrain was hilly, and the forest dark, and dense. Much to my delight there was a wide variety of flowers, with each species in full bloom. In contrast to the towering cedar, pine, and bamboo, the flowers were tiny. Most of the insects were quite small as well.

I discovered a small plum grove that had been carved out of a section of the forest. Lying on the ground under one tree were a hundred or so green plums about the size of quail eggs. An elderly man was in the process of scooping them up into a plastic bag that he brought with him, apparently for that particular purpose. I asked if he was going to eat the plums; however, I already knew the answer. He was going to use them to make umeshu—plum liqueur. He offered me a bagful, but I politely declined, knowing that he hadn’t taken the effort to gather the plums just to hand them over to a complete stranger.

As I walked on, I found a young lady sleeping on a bench. The sign behind her, which was written in Japanese, read, “Resting Area.” She heard me approaching on the path, and woke up. We talked a bit, and I learned she was a local, and in her third year at a university studying medicine. I asked her to show me her favorite place in the reserve. She did! I find it odd that an attractive young woman would freely venture deeper into a remote area with a complete stranger. But, that’s how it often is in a country where people don’t have a level of apathy that is prominent in the States. Ironically, her favorite area was my least favorite. I preferred walking amongst the tall bamboo and cedar. It turned out the reason that spot was her favorite place was that she often brought her dog there, where it enjoyed tromping around in the high grass. We said our goodbyes, and I watched as she disappeared down a path I had not previously noticed, and had only moments earlier walked past while following the young woman with the long black hair.

It was getting late, and time to go home. I had a pretty good idea of what I could expect to accomplish on the next day, if the weather held up. I was pretty excited about returning.

The next day the air was dry. It was cool, and a bit too breezy for my particular purpose. Trying to shoot images up close as they swayed to and fro would be a challenge that generally led to dismal results. I thought about holding off until the wind died down. However, this was the second day in a row of clear blue skies. These conditions weren’t going to last, and if it did rain, and I had to wait a few more days, the fresh buds would certainly be gone. I rationalized that perhaps once I was under the canopy of the thick ancient cedar, pine, and maple that the wind wouldn’t be too great a factor. I would be wrong! Shooting would turn out to be more difficult that I thought, but on the opposing side of the dilemma of high winds and wobbly plant life was the fact that the mosquitos wouldn’t be a great distraction.

I arrived, and began shooting! One of the first things I noticed was that I wasn’t going to get any shots of black butterflies the size of my hands. They seemed to purposely float about high up in the canopy. Other insects never rested, not even for a moment, including the honeybees, which were busy searching for pollen.

After a few hours at Enkaizan Omaru Yama it was time to wrap up the shooting aspect of the project.

While viewing the photos, I realized that I didn’t know what most of the plants were named. I contacted the Japanese Society of Plant Physiologists to see if they would answer those mysteries. But, the organization responded by saying they didn’t give out that kind of information. If an organization that spends its time studying Japanese plant life won’t answer those kinds of questions, then who would? It probably took them more time to translate the response in English, than it would have taken to just tell me the names of the plants.

After looking at the large, blown-up images of life that existed in Enkaizan Omaru Yama, I realized just how small many of the flowers that I took actually were. Some were a quarter the size of the nail on my pinky finger. The insects that were nourished by them were even smaller! Some I could barely see without the aid of the magnification of the lens. Although I haven’t been able to learn the names of several of the plants I shot, I was reminded of how many I had discovered, and how difficult it was to try and photograph them under the rules that I imposed for this shoot.

A week later I returned to Enkaizan Omaru Yama to walk around with my 17-month-old son. I wanted to share with him the place that I had discovered, but as we entered the reserve I was surprised to find that every flowering plant that I had photographed was gone. They’d all been cut down to clear away the high growth that had already begun to cover the walking path, which is where the majority of my photos came from. I wondered, “what form of preservation is this?”

The flowers that hadn’t been chopped to bits had withered in the hot sun. The vast array of insects that lived in the reserve were also gone. It reminded me of the impermanence of all things. On the other end of the spectrum, several bamboo shoots that were barely head high were now towering a dozen feet above me. Even so, the land that I stood upon appeared as if a great storm had come like some land tsunami and flattened everything. The paths that teemed with apparent life now appeared nearly devoid of it. Despite the destruction of what had been there before, the time I was sharing with my son was fantastic. He finally had a chance to see real butterflies as they flew about erratically. I drew his attention to the large black ones that remained unscathed, high up in the canopy.

On our way out of Enkaizan Omaru Yama, I thought of all the microcosms that existed where I had stood. I thought of the unknowing havoc I wreaked upon the microscopic life forms I had trampled upon to get the shots I had taken of the flowers that no longer existed. I looked up one last time at the canopy overhead before leaving the the reserve and caught a glimpse of the blue infinity that lay beyond. Suddenly, the lyrics of The Moody Blues’ “Don’t You Feel Small” came to mind:

“Look at progress, then count the cost.
We’ll spoil the seas with the rivers we’ve lost.
See the writing on the wall.
Hear the mirror’s warning call.
That’s why you feel small.
It happens to us all…” Canopy In Blue And Green 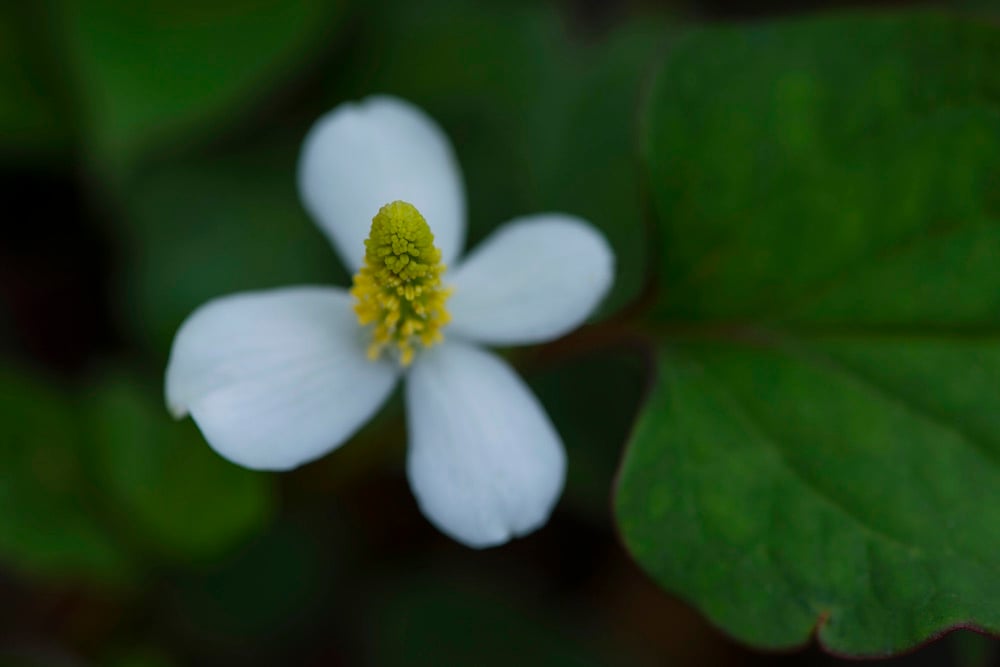 You can find a map to the Enkaizan Omaru Yama area here.