Following Javier Aguirre’s dismissal as manager of the Japanese national football team there were a large number of calls for a Japanese manager to succeed the Mexican—failing that at the very least a coach who had worked in this country, like Dragan Stojkovic or Oswaldo de Oliveira. In the end, though, the JFA ignored all of that and went with the man who led Algeria to the last 16 at the 2014 World Cup, Vahid Halilhodzic. The Bosnian may not have been the fans’ first choice, but he does arrive in Japan with an impressive CV and a fearsome reputation as a strict disciplinarian.

“I had offers from associations other than Japan, and from clubs too,” Halilhodzic said through an interpreter at his introductory press conference. “The reason I accepted the JFA’s offer is because we share the same mentality: discipline, order, respect, and seriousness. I would like to ask everyone for a little time. It’s not possible to achieve success straight away but if you stay patient and allow me some time I’m sure we will achieve something.

“Japan’s results have not been so good since the World Cup, but they have plenty of quality. They are 55th (currently 53rd) in the FIFA rankings; however, in previous years they were much higher. In the three years that I was Algeria manager, we went from 52nd to 17th; I believe Japan can do something similar. The main objective is to qualify for the World Cup, but we don’t just want to take part, we want to do well. We want to get through the first round and into the knockout stage. I think Japan have the quality to achieve this.”

Halilhodzic—who has worked in Morocco, France, Saudi Arabia, The Ivory Coast, Croatia, Algeria and Turkey—began his managerial career in 1990 at local side FK Velez Mostar. He was then forced to leave the city three years later because of the war in the Balkans. A local sheriff had warned him of a potential threat on his life so Halilhodzic sent his family away and bought a gun. He accidentally discharged it and lodged a bullet in his rear end. When he returned to his home he found it had been ransacked and burned down. “(The war) made animals out of people,” he said. “I saw my neighbors become thirsty for blood all of a sudden.”

After fleeing Bosnia, Halilhodzic had a brief stint as manager of French side Beauvais before embarking on a road trip around Europe where he observed some of the game’s most renowned coaches, such as Marcello Lippi and Fabio Capello. He then took over Moroccan club Raja Casablanca, winning the domestic title and the African Champions League. His reputation was further enhanced in France where he guided Lille OSC from Ligue 2 to third place in Ligue 1 and a place in the Champions League. He also rescued Stade Rennais FC from relegation and won the French Cup with PSG. Extremely popular during his time in Paris, he even received the prestigious Chevalier of the Légion d’Honneur of the French Republic: it was one of the high points of his career. 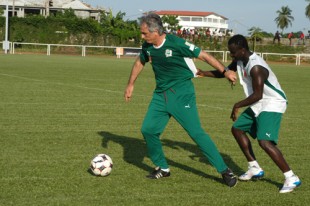 His lowest point came in 2010 when he was fired as Ivory Coast manager shortly before the World Cup. Going into the Africa Cup of Nations in Angola that same year, he had a better record than any Ivory Coast manager in history. He got the side through the group stages comfortably enough, but there was a great deal of anxiety amongst the squad members as they prepared for their quarter-final clash with Algeria. They were located in Cabinda, the region where the Togolese national team had been ambushed by terrorists and three players were shot dead. Clearly affected when they went out on the pitch, the Elephants lost and Halilhodzic was surprisingly given his marching orders. Speaking to the publication So Foot in France months later, it was clear the decision still rankled with him.

“I can’t outlive the experience of being sacked as Cote d’Ivoire coach,” he said. “Losing just one match after 27 successfully played cost me my job. The loss against Algeria was inevitable because the Ivorian players had one objective: quitting Angola as soon as possible after the Cabinda attack on the Togolese team, so it wasn’t my fault. I was dreaming of just one thing then: taking the team to South Africa. I was very sure we would have had a wonderful tournament at the World Cup.”

Halilihodzic’s next job also ended in acrimonious circumstances. His Dinamo Zagreb side walked away with the Croatian league title, but he was forced to resign soon after due to issues over the renegotiation of his contract. Things escalated when the club’s executive president Zdravko Mamic stormed into the side’s changing room at half-time and allegedly insulted Halilhodzic’s mother. Fortunately he wasn’t out of work too long. He was appointed Algerian coach a couple of months later, a job that would finally give him the opportunity to manage at a World Cup.

At the 2014 tournament in Brazil he surprisingly took the Desert Foxes to the knockout stages before being narrowly being beaten by eventual champions Germany. After he announced his resignation there were online petitions trying to persuade him to change his mind and even a personal plea from the Algerian President Abdelaziz Bouteflika. It was hardly surprising to see such widespread support for Halilhodzic: he had, after all, led the country to the second round for the first time in its history, playing aggressive, attacking football that caused all kinds of problems for opposing defenses. It was in stark contrast to Japan’s displays in the tournament—they looked neat and tidy, yet were insipid in front of goal.

“He has to become familiar with Japanese culture. It will not be easy, because you have to become Japanese in the mind. A manager who’s had huge success in Europe is in no way guaranteed similar success in Japan.”

Samurai Blue supporters will no doubt be hoping their new boss can now turn around the side’s fortunes. In order to do that he must “become Japanese.” That is the view of fellow Bosnian and former Japan manager Ivica Osim who spoke in an interview with Kyodo News before the appointment of Halilhodzic became official. “If you’re going to bring someone in from abroad, it’s important he develops a deep understanding of Japan. To succeed, he must grasp the Japanese way of life, its people and players in detail. He has to become familiar with Japanese culture. It will not be easy, because you have to become Japanese in the mind. A manager who’s had huge success in Europe is in no way guaranteed similar success in Japan.”

Due to a stroke Osim was only in charge of the Japanese national team for two years in 2006 and 2007, but he left a lasting impression. A volatile character, he often rowed with the press and even reduced his interpreter to tears during a dressing-room tirade against his players. Halilhodzic has a similarly fearsome reputation. During his recent two-month stint with Turkish side Trabzonspor—his second spell at the club—he was sent off three times and regularly lashed out at players, fans, and directors. After quitting the Algerian job he said he would “never forgive or forget” the actions of certain sections of the media who tried to “stigmatize” both him and his family. An outspoken manager, it will be interesting to see his fiery press conferences over the next few years. Hopefully his team will be able to provide some fireworks on the pitch as well.

Halilhodzic’s opening game in charge was on Friday, March 27 against Tunisia in Oita, and will be followed by Uzbekistan next Monday, March 31 in Tokyo.