Known for being the country’s “local” tropical getaway, Okinawa is also home to Japan’s first cherry blossoms of the year.

The sakura, or cherry blossom, is one of the most recognizable symbols of Japan. The famous flowers bloom for but a few weeks and soon fall, but during that short time, the country loosens up a bit behind this brief backdrop of white and pink petals.

For most people, it’s enough to celebrate this yearly event with some time on the blue tarp, drinking and cavorting over a few weekends, and leaving it at that. But what if, like surfers chasing the perfect wave, it would be possible for hanami enthusiasts to follow the fall of blossoms for months, while taking in the many sights of the country at the same time? When you consider the considerable length of the Japanese archipelago—just a bit over 3,000 kilometers from the top of Hokkaido to its southernmost islands—cherry blossom season can become quite an extended stretch of time. And the first stage of that stretch would begin in Okinawa, where the cherry trees begin to blossom as early as January. In fact, because the sakura bloom requires a combination of hot and cold weather, the “wave” of cherry blossoming begins in the northern part of Okinawa, and a cold front heads towards the south, bringing a wave of dark pink to the southern islands of the chain.

As it is with so many things in Okinawa, hanami is done a bit differently than it is done in the mainland. This difference begins with the sakura themselves. The traditional cherry blossoms that Japan is best known for are the pale pink flowers of the Someiyoshino (the Yoshino cherry tree), which blooms at the same time as the other trees around it. However, the Hikanzakura is the dominant blossom down south. The tree blooms a more robust pink, its petals stay longer on the tree, and each tree tends to bloom at its own pace. 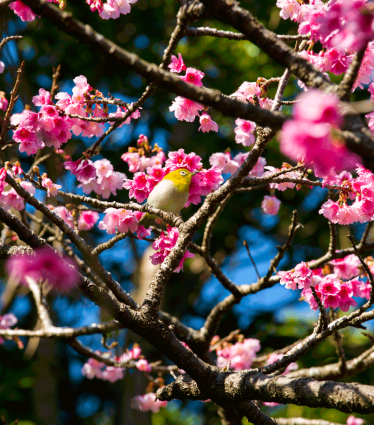 This has also had an effect on the way that hanami is conducted in Okinawa. Instead of staying put and making merry with a few bottles of your favorite adult beverage, you’ll find that hanami in Okinawa is often an ambulatory affair. Some of the best spots for cherry-blossom viewing in Okinawa are about an hour’s drive to the north of Naha, but these festivals allow you to take the southern prefecture’s cultural celebrations, unique history, and ocean views in stride, accompanied by the rare pleasure of enjoying hanami in a subtropical setting.

Yanbaru, the northern part of Okinawa, is the first area that springs into bloom, and is the home of many cherry blossom festivals. Perhaps one of the most beautiful, and the most celebrated, is the Motobu Yaedake Sakura Festival, now in its 37th year. This festival makes the most of the nearby landscape, where you can look down over a vista of trees in full bloom from the height of Yaedake, marveling at an unfurled carpet of pink that billows down from the mountain slope.

Another popular hanami spot in Yanbaru offers a chance to take in the hanami blooms surrounded by the traces of history. The Nakijin Gusuku Sakura Festival is held at the ruins of Nakijin Castle. It’s a relative newcomer to the Okinawa sakura scene, but its unique location makes it a popular draw for locals and visitors from farther afield. Nakijin Castle was only in active use for a short time—construction on the site began in the late 13th century as a part of the Ryukyu Kingdom, and it was destroyed about 300 years later by feudal armies from Kyushu—but the echoes of history that can be felt by gazing on the stretches of stone wall make it a place that people return to again and again. And when the sakura are in bloom, the location is even more memorable. During the evening, the cherry trees are illuminated, making for an experience that combines a sense of the passage of history and the ever-renewing cycles of nature.

If you’re looking for a more festive atmosphere to accompany your hanami experience down south, you should drop in on the oldest and largest of the festivals around northern Okinawa: the Nago Sakura Festival. Boasting a lively and colorful costume parade, traditional Okinawan Eisa dancing in the streets, and taiko drum performances, the centerpiece of the Nago Sakura Festival is the more than 20,000 Hikanzakura that festoon Nago Central Park, itself the former site of a ruined castle.

To the south of Naha, at Yaese Park, a 200-step staircase is flanked by rows of the pink-blossomed Hikanzakuri. On clear days, you can see Shuri Castle, and out to the East China Sea and the Kerama Islands, while during the evenings, the cherry trees on either side of the walkway are illuminated, making the experience all the more memorable. If a bit of island hopping is on your Okinawan itinerary, you can make your way to Kumejima, which is several hops away from the main island. It’s a location where you can take in the small island ambience while also seeing the blossoms that have made the country famous.

And you’ll find that the blossoms aren’t too far away, even if you stay close to the city of Naha, which has plenty to offer on its own. The two sakura matsuri close by Naha are the four-day Naha Sakura Matsuri, held at Yogi Park from February 12 to 16, and Manko Sakura, held at Manko Park, during the middle of February.

The following are the dates for some of Okinawa’s best-known festivals. However, because we’re talking about a natural phenomenon, it’s always best to check with an official cherry blossom forecast, one of which can be found at
www.jnto.go.jp/sakura.