Initially told he looked a little young for the role of Takashi in Godzilla, Ken Yamamura thought his chance of appearing in Gareth Edwards sci-fi adventure had all but gone. He, therefore, decided to give an influential casting director named Yoko Narahashi a call to see if there was anything she could do.

Responsible for introducing the likes of Ken Watanabe and Rinko Kikuchi to Western audiences, she is arguably the most powerful Japanese person in Hollywood and last year gave Yamamura his big break in Wolverine. If anyone could help, surely it was her.

“Straight away she said come in on Thursday, you’ve got an audition, just like that,” Yamamura tells Weekender. “It was the same role I thought I’d been turned down for. I couldn’t believe it. Without her help I’m sure it wouldn’t have been possible, I can never thank her enough for what she’s done.

As you’d expect most casting directors focus on famous people with high profiles, that makes it extremely difficult for actors like me trying to make it in this industry. I’d heard about this great lady who was prepared to see up-and-coming performers so I decided to try and contact her.

I wrote several letters, then just when I was thinking of heading down from Osaka to Tokyo to try and see her, I got a call saying she wanted to meet me. She is quite intimidating so auditioning in front of her was really nerve-wracking. I think it went quite well though: she seemed to quite like me.”

She certainly did. Since their meeting Narahashi has cast Yamamura in two Hollywood blockbusters, first as the young Ichiro Yashida in Wolverine and more recently as scientist Takashi in Godzilla. Both roles have given him the opportunity to work closely with the movies’ leading men—Hugh Jackman and Bryan Cranston, two actors he holds in high regard.

“They are real professionals, but at the same time don’t act like big stars,” Yamamura says. “Hugh [Jackman] was completely down-to-earth, while I saw Bryan [Cranston] as a kind of uncle type figure, always wanting to give me advice. I knew him from Breaking Bad, but it was only I when I saw him close-up I realized he was Hal from Malcolm in the Middle. 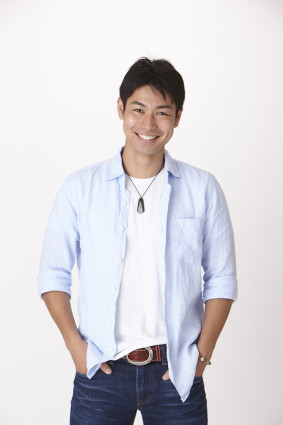 It’s been a privilege to have appeared in scenes with both of them, I also feel very fortunate to have been part of these two huge productions. I remember watching X-Men and Godzilla when I was younger, I even bought Godzilla figurines. I never dreamt I would actually be in a Godzilla movie.”

Up until a year ago the Osaka-born actor had only done low-budget independent films. His lack of experience, however, was of little concern for Narahashi who casts people on merit rather than reputation. She’s prepared to gamble on lesser-known names, like she did with Rinko Kikuchi in Babel, as long as they sparkle during the audition. That’s exactly what Yamamura did and now his future prospects look very exciting.

“I think he can do anything,” Narahashi tells us. “He’s so bright and energetic, yet at the same time never over-acts or tries to be something he isn’t. His qualities were evident right away; I just felt this was someone audiences would empathize with.

“It was just so easy and refreshing to audition him. Sometimes you worry about passing actors over to a director because they may face a long haul to get them taped; with Ken, however, I felt completely confident that he could always get it in two, maximum three takes. On top of all that, he speaks fantastic English and is a great guy, which counts for a lot.”

High praise indeed. Narahashi, who certainly know what it takes for a Japanese actor to succeed in Hollywood, clearly has a lot of faith in Yamamura. She believes we will be seeing him in many more feature films in the future and with a track record like hers, who are we to disagree.