Taking a trip to Devilcraft, Kanda, this month one writer found American style pizza pies and craft beer to write home about, and then some…

As a long time resident of Japan, I am always looking for a break from traditional Japanese fare. More specifically, I often crave the unhealthy fruits of my American homeland – burgers, cheesecake, thick sandwiches, and of course: pizza.

Which was why I was delighted to finally make it to the legendary ex-pat watering hole known as Devilcraft this month, and with the restaurant celebrating its two-year anniversary with much fanfare, my timing couldn’t have been better.

Devilcraft, in Kanda, specializes in both craft beers and what I’ll call the “rare unicorn of pizza” here in Japan: Chicago-style deep-dish. Yes please!

The brainchild of three American beer aficionados, Devilcraft was created in order to fill what they saw as a gap in the Tokyo restaurant scene and offers a combination of hearty food and good craft beer in a pub-like atmosphere. 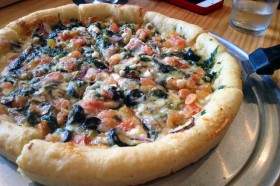 The Eden pizza at Devilcraft, Kanda – you might need a few friends for this one…

According to Jason Koehler, one of the owners, the results have been both impressive and humbling for his team:

“One great thing about our pub is that we get people in to try the pizza who have never had craft beer, and vice-versa. I especially love it when a pie is placed in front of a customer and they start snapping photos in disbelief.”

Looking ahead at the next two years, the team will be managing their new Hamamatsucho branch as well as other future prospects (see below).

Back to my experience. Arriving at 2.30pm without a reservation (not recommended!), our waiter, clothed in black from head to toe, escorted us past the crowded first floor bar area up to a comfortable second floor table. Devilcraft actually has three floors, all stylishly casual and warm, and sometimes even improvises with additional seating outside.

We promptly indulged in the anniversary menu, ordering fresh, chunky salsa topped with cilantro, creamy spinach and artichoke dip infused with parmesan, and seasoned waffle cut fries that were crispy and hot. Delivered by a computerized dumb waiter, all were delicious appetizers and met with rave reviews amongst our group.

“The Devil Works is a one kilogram beast with three cheeses on the bottom, three kinds of meat, an assortment of seven vegetables, and the house marinara sauce on top.”

For the main event, slices of “Eden” (a sauce-less pie topped with mozzarella, parmesan, provolone, feta, and fresh veggies) and “The Devil Works” were gobbled down with gusto.

The latter, it turns out, is Devilcraft’s most popular pizza. It is a one kilogram beast with three cheeses on the bottom, three kinds of meat, an assortment of seven vegetables, and the house marinara sauce on top. And as Jason claims, this pizza is “entirely a different kind of animal than a classic Italian style pizza – robust, flavorful, and filling.” I agreed.

Unfortunately, I am not a beer connoisseur, despite the fruity appeal of such ales as “Epic Brainless Raspberries” and “Aqula Kiwi IPA Real Ale” offered that day. Don’t judge. But looking around at the satisfied (and slightly intoxicated) faces of my beer-wielding comrades, I’m pretty sure there was a general consensus of happiness.

And considering the craft menu of 15 taps changes every day and features both local and international selections, beer lovers can always expect something new, be it wheat, fruity, porter, amber ale, or lager. Jason believes “there is a style of beer for everyone, and we hope everyone can find something they like on our tap list – even self-professed beer haters!” Guess I’ll have to try next time… As a tip, the India Pale Ale style is the best selling for a reason and nicely compliments the full-flavored pizza. 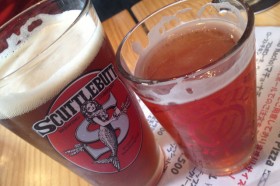 Scuttlebutt beer and one of Devilcraft’s own brews…

All in all, Devilcraft did more than just make my tummy happy. The whole restaurant is smoke-free, a welcome respite from the cloudy restaurants I often visit in Tokyo.

For the Happy Cows out there, including myself, there are plenty of vegetarian options, such as the aforementioned “Eden” pie as well as “The Veggie Works” and “Big Cheese.” In addition, an English menu and English service is offered for those in need. Pizzas run from ¥1,050 for a small (1-2 people) to ¥3,700 for a large (2-3 people), pie dependent. Devilcraft’s most expensive pie is “The Meatzilla,” aptly named for its monstrous amount of meaty toppings.

Devilcraft’s new location, in Hamamatsucho, is now open, a one-floor establishment with a larger bar featuring 20+ taps, and the same menu as in Kanda. It’s located a few minutes from the Kanasugibashi exit of Hamamatsucho station and basically has the same business hours. Reservations are highly recommended at both restaurants, as they are sometimes booked up over a week in advance during peak times. (Parties will be capped at a two-hour sitting time during weekend nights and special events.)

Plans to start brewing their own beer are in the making for January or February 2014. Further down the road, Jason and his crew intend to look for a third location, possibly in the west on the Yamanote loop. Also on the distant radar is the idea of a production brewery, able to supply more locations with their craft beer.

View デビルクラフト（DevilCraft） in a larger map