It is a love affair with the area that started back in April 1977 when, living in Tokyo as a teacher at an international school, David Green, his wife, Yoshiko, and two friends, asked themselves a simple question one weekend: ‘Why don’t we go on a bike trip?’

They rode down as far as Kawasaki and hopped on the now non-existent ferry that would take them over to Kisarazu and eventually down towards Tateyama and the southern tip of the Boso Peninsula near Chikura. They found a place that they would return to year after year.

Today it is the Tokyo Bay Aqua-Line or a ferry from Kurihama, near Chigasaki, that is many people’s route direct from Tokyo but you can also go down by bus very easily (and also directly) from Tokyo station in under two hours. When people do make the trip – for the weekend or even just a day – they are, we hear, often surprised with what they find and just how near it is to home.

Green went yearly with friends before returning with his 9th grade students for cycle trips in the natural surroundings many of them couldn’t believe were just over an hour or so from the city.

“We’d camp on the beach at first, he says, “but we gradually got more organized – at some point in the 80s we started wearing helmets!” He eventually set up home, and business, in the area and is now based permanently in Chikura – “one day you wake up and realize you are where you belong,” he says – where he runs Discover Japan from a lodge surrounded by thick bamboo forest that the sound of the nearby sea washes over. 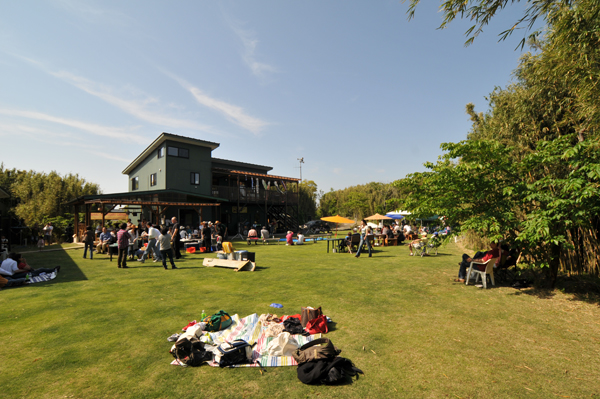 Summer party at the lodge, surrounded by bamboo forest

The center hosts schools, groups and families with children of any age and occasionally couples or groups of friends and has a simple philosophy: “We want to get people out of Tokyo, especially to a part of Japan that is special to us and that they might not see living in such a big city. There is potential to either be quite active or relax while enjoying the beautiful local nature and it’s all so close.”

His cycle trips, beach days, barbecues and spring music festivals are not the only thing bringing guests back to the town year after year.

Chikura has in recent years become known as something of a colony for artists. The Chikura Kaigan Museum of Art has got quite a bit of media attention due to its founder, well-known photographer Shimpei Asai, and many more who had once been visitors have ended up staying.

We took a stroll around the town and found many local cafes, pensions and restaurants with a stylish aesthetic and a welcoming ethos. Locals seemed to go out of their way to help us – foreigners come to the area often and many of the business owners we met had been travellers themselves.

We met Toshiro Komiyama, who worked with Asai, and he told us it was his love of Ernest Hemingway and his lifestyle – and a visit to his former Key West home – that led him to open Sand Café back in 1994 after initially coming to the area to work at the museum.

We sat in its rustic wooden building and drank excellent coffee from what he called “rugged” cups – Komiyama imagined when surfing he could have a place to relax afterwards and live a simple lifestyle only a town like this could offer. Everyone is welcome: we saw a couple discussing something on their laptop and the lunch-time rush brought tourists on their way to the nearby Flower Line – already coming into bloom this early in spring.

We met Kanamoto-san down the road at Indy’s, a classic American diner-style pizza café that could double as home to any bikers in the area – a mock motorbike garage fills the corner of the room but it was the pizzas he shoveled out of his terracotta style oven that made us promise to be back.

Green always urges people they should stay over in Chikura. It’s so close, but if you come down Friday night, “the feeling of waking up here, surrounded by nature with a whole weekend before you is just unrivalled.”

Mr Nakagawa is another who first came to the town due to Asai’s museum and it’s no coincidence that his Porto Maison Rooms, a sophisticated and modern small hotel near the Flower Line, also has an open, Key West feel. Its relaxed café allows pets, as do the rooms upstairs – great news for many who don’t want to leave anyone behind in Tokyo.

Hawaii-inspired Long Fields is another option, only a couple of minutes’ walk form the beach at Chikura. It is airy and light and, as in many of the places we visit, we got the feeling that a design-minded owner had brought quite a natural and personal touch to the place.

Overall we agree with David that a weekend – or even longer – would be a great amount of time to spend in the area. For years people have been finding a place they might not have known existed so close to Tokyo and that such rural hospitality is so welcoming to foreigners means that we might have a new favorite getaway.

Getting there: Discover Japan has detailed guide – click here.

EDIT: See comments below for more info on how to get there. Thanks to David Green for that.