Curse of the AKB Idol

Give a pretty teen their sexual freedom, and you ruin a great business opportunity.

It takes a very tenacious person indeed to ignore the crying calls for attention of ‘idol groups’ in Japan. You’ll be hard pressed to find a billboard or a TV screen that the greasy smiles of these factory-produced pop squirts haven’t covered. Their position in the collective consciousness is so loud and so ubiquitous in fact, that even the bad publicity feels part of the grand performance.

Take, for example, the rule that bans members of one of the largest and most successful idol groups in Japan, AKB48, from having romantic relationships. This is a rule that looks like it was made to be broken.

One can imagine Japanese PR tycoons converging to discuss how better to increase their media exposure; forbid precisely that which hormonal and adolescent idols will find hard to resist, and voilà, the media hysteria is yours. Indeed every time supposed “sex scandals” emerge, fans go bewilderingly pale with horror and the media re-hashes old debates about the fairness of the rules. But at least everyone is talking about AKB.

The most recent violation of this rule was committed last month by formerly top-ranking AKB member, Minami Minegishi, who was caught by the gossip rag-mag Shukan Bunshun “staying the night” with Alan Shirahama from the boy band GENERATIONS. Nothing could sound more unremarkable than that. 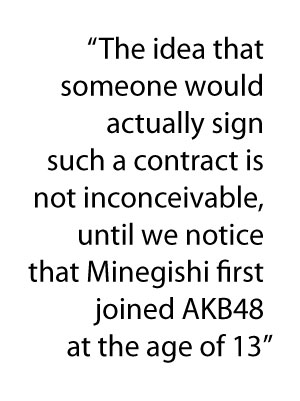 The aftermath however was appalling. Immediately after the photographic evidence of her romance had come to light, the AKB management banished her to the trainee ranks of the group for “re-education”.

This was followed by Minegishi herself appearing on-screen dressed as though she had just crawled out of a correctional institute: her hair poorly sheared, her scalp visible and her self-esteem a weeping wreck of agony and shame.

The video – uploaded to YouTube – was made apparently as penance to those she let down. She claims she shaved her head willingly in a fit of shock at the release of the story.

She did break the rules after all, and her comradeship with the more line-towing idols of her company could well have left her ashamed. She may also have been frustrated at having breached a contract that could give her a lifetime’s worth of riches in exchange for a few years of abstinence.

The idea that someone would actually sign such a contract is not inconceivable, until we notice that Minegishi first joined AKB48 at the age of 13. Suddenly the validity of her consent, the questionable role of her parents and the whole predatory nature of the idol industry comes into focus.

AKB48’s male equivalents, the plastic-looking boys of the Johnny & Associates agency, operate under similar arrangements to their female counterparts and yield equally lavish profits. They try to appear single and available at all times so their fans can more easily picture themselves hanging off their arms, and so fans feel personally addressed when listening to them sing.

Johnny’s Boys, however, are subject only to an unwritten expectation that they not be seen with a “publicly-visible girlfriend”, unlike AKB48 who are contractually bound not to “return the affection” to anyone they might want to. This is true also of AKB48’s numerous lesser affiliates (such as SKE48 and HKT48, the Nagoya and Fukuoka offshoots) as well as Morning Musume.

Meanwhile, the agency representing the male idol involved in the Minegishi affair, Alan Shirahama, released only a short statement about its client’s behaviour, saying: “We leave his private life up to him”. He could well have been given a stern word behind closed doors, but such treatment is hardly the persecution that the girl idols go through.

If aspiring girls must be more forcefully restrained to become successful idols, it rather reveals how much more demanding and imposing male fans are with their fantasies. This sort of subjection might pay well, but isn’t that precisely what is most alarming about it? Why must such a clause even exist in a contract? Is a submissive and pubescent image of attractiveness really what the Japanese mainstream wishes to project?

Besides the obvious gender bias, the core of the problem is surely in the overly grandiose title of “idol” – a word used to describe representations of gods, and images of perfection, not only elite brands of darling celebrities. AKB48’s particular brand of “idol” is grossly demanding. Its members have to attend handshaking events with enamoured fans, disclose body measurements, blood types, tastes and habits as well as take vows of chastity.

It is one of the most unpalatable yet cunning social phenomena in Japan. It allows fans to entertain their fantasies as truths, and primes them ready for willing expulsions of cash. The commercial machine knows all too well how much people want to believe that imperfectly evolved primates can achieve perfection. And a most tyrannical delusion it is too.