Held between last September and February of this year, the “Share your Wow! Japan photo contest” finally announced its winners, at an intriguing underground ceremony last week… 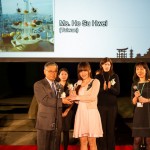 The theme of this photo contest was “Wow!” – relating to the breathtaking sights that can only be seen around the country. Whether the subject matter was a temple tucked in the woods, cherry blossom flowers in bloom, waterfalls in the mountains, sculptures at the snow festival in Hokkaido, a colourful sushi plate or Lolita girls roaming the streets of Harajuku, as long as you snapped a shot of it, you could make the cut.

Divided into categories which seem to sum up many of our experiences in Japan, they sported names such as ‘Cool!’; ‘Delicious!’ (see the top image); ‘Happy!’; ‘Beautiful!’; ‘Funny!’; and ‘Miracle!’.

There was also a main category which all photos came into – ‘Wow!’ – which formed the basis of ‘votes’ on the pictures. This was a truly social competition – the organizers were hoping that the pictures would inspire people to travel to Japan and show the country’s ‘undiscovered’ charm.

Prizes were also alluring and included flights to Japan (if you weren’t here already) along with some unique experiences one can only try in Japan. Where else could you be the lord of a traditional castle for a day, take a tour of Kamakura with Miss Japan, feast on Two-Michelin-star standard sushi or go shopping with a ‘Kawaii Ambassador’?

Finally, through discussion and voting winners were chosen. A grand total of 17,070 people participated in the campaign (organized by the Japan Tourism Agency) with 38,817 photos submitted: the Facebook page alone got about 250,000 fans.

Just seven lucky photographers were picked for the prizes, coming from Singapore, Taiwan, Canada, Korea, Vietnam, South Africa and China to collect their prizes. You can view the winners of each category here. You can also browse through all the photos to see the beauty of Japan by clicking here.

On March 15, the winners were revealed and they participated in an award ceremony, where the Japan Tourism Agency handed out the prizes. Lots of Japanese and foreign media were in attendance at the event, held at the Metropolitan Area Outer Underground Discharge Channel – which if you didn’t know about you should check out.

The underground flood water diversion facility is not as dull as it sounds, and the 25m columns deep under Saitama provided a fascinating backdrop to proceedings.

Japan has been recovering steadily from the disaster that hit the Tohoku region in March 2011 and tourist numbers reached pre-earthquake levels for the first time in June last year. The contest was added incentive to visit the north Kanto/Tohoku region.

The Miracle! prize winner was Nicola Furniss, of South Africa, who had returned with her camera to Kesennuma-shi to meet friends from her time as an ALT in the Tohoku region. She met an old student, Ryouko, and snapped her at the ruins of her tsunami-raveged house. Her spirit – jokingly telling Nicola that she now had an outdoor bath – was captured and the prize was one of the most poignant of the afternoon.