Tottori is famous for its sand dunes and after looking at the nearby Sand Museum earlier this month, we wanted to find out more.

It’s early in the morning that they look best, without any footprints and with the low sun shining shallow on the waves the wind has cast onto the sand. The shadows at dawn give texture to the dunes of Tottori, and getting up at sunrise has never been more worth it.

Walking up and down the dunes, the largest in Japan, is attraction enough for many but if you aren’t satisfied by simply getting sand between your toes, how about a camel ride? Whether you decide to take a chair lift above the dunes, try a bit of sand boarding, learn about the dunes’ makeup and spot interesting formations or explore on your own, you should definitely stay for sunset.

This National Park is a unique part of Japan just a one-hour flight from Haneda which deserves to be seen by all at any time of the year.

Dunes Past and Present:

Formed over the last 100,000 years, the dunes, around 16 kilometers long from east to west and two kilometers wide, are the largest in Japan and have great significance for the area that goes further than sightseeing. Isao Takeuchi, the Mayor of Tottori, Tottori prefecture, tells Weekender that “We would like to utilise this natural resource as a means of tourism, of course, but also for environmental studies, such as that of desertification.”

Mayor Takeuchi feels it is very important to have been recognised by UNESCO as part of its Geopark program. The idea is that local governments and people in an area of geological heritage sites which are rare, important or have particular aesthetic appeal will follow a policy of integrating “protection, education and sustainable development.”

These are just the kind of ideas Takeuchi speaks about with passion. The San-in Kaigan Geopark, one of five in Japan, encompasses many areas of geological interest across the area, such as sea caves, columnar rock outcrops and strata, and the dunes and sandbars around Tottori – and the Tottori Sand Dunes Geopark Center are an integral part. 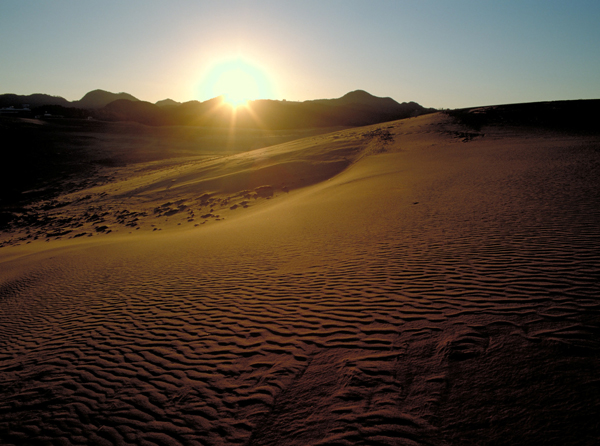 The Future of the Tottori Sand Dunes:

“To help us raise the profile of the area further,” Takeuchi says, “one thing we have done is start the Sand Museum. That has helped us to exchange ideas with global talents, such as world class sand sculptors who have great knowledge, and we would like to move even further. I would like to hold a World Sand Dune Summit.”

Sharing information and skills with other countries has been important in the conservational aspect of the policy – the dunes have shrunk over recent years due to reforestation projects and even tsunami walls on the coastline of the Sea of Japan.

Hiroyoshi Hata, a local businessman and ambassador for the Tottori tourism board: “I have visited places with incredible dunes such as Vietnam several times to get ideas. Those dunes are different but study exchange with people there – and our dream of setting up a world summit – will, we hope, help solve a global problem. We don’t want to lose these dunes.”

Have a look at the Tottori Sightseeing Association website for more information on the area and how to get there.