With the 25th Tokyo International Film Festival (TIFF) just around the corner a special event was held at the Akasaka Civic Centre Hall to celebrate and commemorate the life and work of director Kaneto Shindo, who sadly passed away this year.

The legendary director was famed not only for his classic films, but also his longevity – he finished his last film at the ripe old age of 98, becoming the second oldest working director in the world in the process, and was honoured at the Civic Centre with a screening of his final film, ‘Postcard’. The screening was followed by an interview with the film’s producer, Jiro Shindo, who also happens to be the director’s son (pictured, above).

Postcard was first screened at the 23rd TIFF in the competition section and was awarded the Special Jury Prize. The film looks at the devastating effect of war, not on the front lines but at home amongst the families of the men who do not return.

The film, loosely based on the wartime experience of the director himself, opens with a group of navy conscripts who will be assigned by lottery to their next posting. One recruit, Sadazo, fears he will not survive his posting in the Philippines and so shares a postcard from his wife with bunk-mate Matsuyama, asking him to return the card to her if he survives the war. 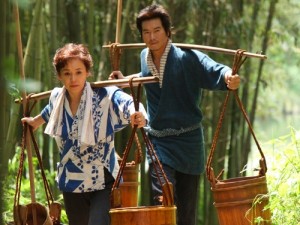 Still from the movie, which will show again at the Tokyo International Film Festival

The film then cuts to the homestead of Sadazo where his wife Tomoko, played wonderfully by Shinobu Otake, is left to cope, dealing with crushing financial responsibilities and the death of the man she loves.

Simply shot and edited the film matter-of-factly presents the destruction heaped upon Tomoko and her in-laws as her feelings of anger, helplessness and loss grow. The house and surrounding farmland look calm and peaceful but the far reaching effects of war have turned even this calm idyl into a type of prison for its inhabitants. A remarkable achievement considering the directors age, the film is a fitting end to his career.

Jiro Shindo, President of Kindai Eiga Kyokai and producer of several of his father’s later works revealed some of the difficulties in making the film with the aged director. At the time of shooting, Kanedo was confined to a wheelchair and his eyesight was failing, which made for a tremendously difficult task. Along with the physical demands, budgetary concerns resulted in the shooting time being cut from 60 days to 45, a fact that the director would not let his son forgot: repeatedly exclaiming “my son made me shoot the film in 45 days!”.

After shooting the final scene in Izu, the director, knowing it would probably be the last thing he ever shoot, was clearly moved and so the crew left him alone as he sat and looked up at the sky.

Postcard (Ichimai no hagaki) was released on August 6th 2011 Japan but has no worldwide release yet. You can view a trailer, in Japanese, here.