Bowing down, literally, to your every need and desire, service professionals in Japan are the first thing many foreign visitors notice. Some of us are even disconcerted – what did we do to deserve this?

Enter any department store, restaurant, airport, car dealership or office and your “host” will act with complete deference. It’s as if they have completely given themselves over to you, the embodiment of being ‘at your service’. 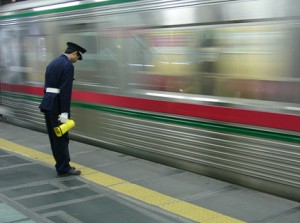 How did it get to be like this? How did it stay like this? In an advancing business world, often obsessed with economies of scale, with technological thinking often moving service to the automatic – how is Japan keeping hold of tradition?

Some companies look back as well as forward. They look to Japan’s ancient philosophy of omotenashi – the ‘selfless desire to take care of others’ – and find something that may explain just how they can create a relationship between service giver and ‘guest’ that is completely non-dominant.

Muneyuki Joraku, an omotenashi researcher who works for the Mandarin Oriental says, in an interview with WAttention, that “the host anticipates the needs of the guest in advance and offers a service that guests don’t expect. They should not wait for instructions.”

When Toyota decided to bring its Lexus brand back from the US and launch at ‘home’ in Japan in 2005, executives sought something special that they hoped would give staff an edge. In the US, things had been easy. “I had heard that in the USA, Car Dealerships were said to be the least desirable place to go, behind dentists,” says Toyoshita Abe, Area Brand Manager of Lexus Japan Sales & Marketing, “I think that’s due to their terrible service.”

Frustrated, though, with what it saw as a lack of ability to distinguish itself in a Japanese market crowded with companies doing things right for the customers, Abe’s colleagues looked to omotenashi.

While even high street stores and other car companies would be seen by many as doing just fine – better than fine for many Westerners – the plan was to learn from the hospitality of the best luxury restaurants, the best manner schools, the best hotels, the best department stores and even those who deal with royalty and the Imperial family. The discipline required to serve in such places, to serve such people, is in a different league. All of the company’s managers took part in an overnight course at the Ritz-Carlton hotel in Osaka, which had been ranked number one for customer satisfaction in the prestigious Nikkei Business Survey for six consecutive years.

They learned and practiced the intricacies of the Japanese tea ceremony. They received classes from the likes of Ogasawara Ryu Reihou, a 600 year old school of etiquette which specialises in “beautifying daily behaviour,” using teachings passed through the family with little change since the 1300s.

Among the new Lexus rules of etiquette – as well as serving tea (and coffee) in the most traditional way possible – is the so called “warriors waiting position”. This, the act of leaning between five and ten degrees forward when a customer is looking at a car, is not the only Samurai inspired detail.

Apparently, a salesman will point with five fingers to the handle of a car before opening it, with both hands, right before left, sliding the handle gracefully in the way a screen door would have been opened in the 13th century. Even the closed mouth smile, known in some marketing circles as the “Lexus face”, is part of the regimented routine of what a 2007 Wall Street Journal piece called ‘The Samurai Sell’.

Omotenashi is here to stay, so hopefully we can all look on those serving us with a new found respect, having somewhat demystified quite the level of training they have gone through to hone their craft.