Guitar geek? Then you won’t have missed Tokyo guitar show… If you did miss it, fear not; Laurier Tiernan rounds up the highlights. 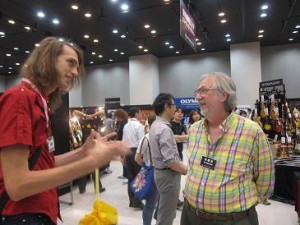 Japanese favorites such as Fender, Gibson, Rickenbacker, PRS, and Warwick were the staples of the show, but even “boutique” makers such as Lowden brought out their finest wares for all to dream of buying some day.

At the back of the main hall, a large stage exhibited a stunning variety of performers and personalities, from acoustic acts to heavy metal shredders – and even legendary luthier Grover Jackson, who presented his newest brand (GJ2) and answered questions for a packed audience. There was even a choice of 13 different world beers to sip while they strummed. 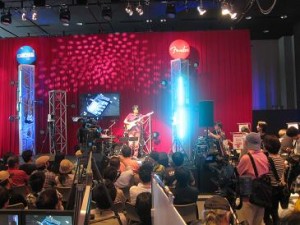 Boss/Roland had the biggest display, on the main floor of the Event Hall, with a mind-boggling array of electronics designed to improve the lives of musicians from every skill level. A stage at the back of their room hosted a constant flow of technicians who demonstrated the capabilities of cutting-edge sound processing. Boss/Roland enthusiasts got in on a Japanese trend, holding a stamp rally for the chance to win a free t-shirt.

One of the biggest draws of the show, for many attendees, was the chance to see one of their heroes perform up close for just over a thousand yen. Japanese music legends, including Kanjuku Trio, The Rootless, Kato Hisashi & Furuichi Kotaro and Saito Makoto all performed torapt fans.  Even Japanese guitar hero Char made a last-minute appearance.

Having grown 150% in size since their 2011 event, it’s hard to imagine how Tokyo Guitar Show will outdo themselves in 2013, but it surely will be an event not to be missed.