A million yen for some face cream which promises beauty, that is.

You only have to walk around commercial districts of Tokyo such as Shibuya or Ginza and check out the shopping bags of the, mainly, women on the street (or catch a whiff as they waft past) to know how seriously the market for cosmetics should be taken. 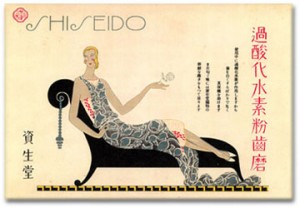 Cosmetics giant Shiseido is the company responsible for perhaps the classiest publicity stunt of the week, Nikkei reporting that the special bottle of their ‘La Creme’ – from the Cle de Peau range, which is apparently also “celebrating” 30 years on the shelves – will be housed in a “cylindrical crystal container with three rings of platinum representing the present, the past and the future.”

So where does the money go? French sculptor Olivier Severe and crystal maker Saint-Louis help to push the price up but, incredibly, even the basic version would cost about 50,000 yen (US$632) for a 1.8 oz jar. The company claim that the cream will lift and tighten skin with it’s ‘anti-ageing’ properties. At that price we hope it would shave years off your looks!

You will not spot this one on the department store shelves; if you want to get your hands on it you will need to put your name in a hat – between August 30 and September 20 – and see if you are ‘lucky’ enough to be able to part with your cash on the 21st – there are only to be three of the super-limited edition jars available.