Twenty eight year old Sophie Milman is a rising star of the jazz world. Born in Russia then brought up in Israel and Canada, Sophie is a true product of the world. Tokyo Weekender caught her before she jetted back to Toronto after her “In The Moonlight” promotion tour in Japan.

How many times have you been to Japan?

I’ve been nine times now. It’s like nowhere else, the audiences are so intelligent, they know the structure of jazz songs and all the tunes. The audiences are also so young compared to North America, that means there will be listeners for many years to come.

You were in Toronto when the earthquake hit, how did you react?

After 3/11, I wish I was one of those people who just got on a plane and went but I was too chicken. When I booked to come over we really didn’t know what to expect visually or in terms of peoples moods. I remember sitting in Toronto watching TV and just feeling helpless. My husband and I gave a donation and relatively, for us, it was sizable but it felt so stupid, like, this is all I can do?

What was your impression of Japan this time?

What I found people are definitely more serious, they don’t mask the fact that there has been a tragedy but they are optimistic and they are generally upbeat and very, very forward looking. The way these people handled this crisis is like a beacon to the world. If you look at those stupid riots a few months back in London, it was embarrassing—for what? They accomplished nothing and here you have the worst crisis in dozens of years and there is no looting or stealing or exploitation.

You sing in English, Russian, French and Hebrew, how about recording a Japanese song?

Most of my Facebook and Twitter followers are Japanese, they send me suggestions but the problem is I don’t understand anything! I am very lyrics driven, so even though my French isn’t as good as my English, Russian or Hebrew, I can read it, so I can dig the language. It is very difficult to go just from a translation, but we’ll see.

What Japanese food do you love or hate?

I eat sushi three times a week in Canada, on my recent California tour I had sushi lunch and dinner every single day. I love Japanese food like soba and all the wonderful little cakes. The only thing I can’t do is ramen, it’s too heavy for me.

When you travel on tour, what do you bring?

I can’t live without my iPod and music and my own gargle mixture. I bring my own salt, soda and honey. I carry all these white powders when I travel, Customs really enjoy that! I also bring a personal steamer, microphone and in-ear monitors. I travel very heavily!

How has moving so many times shaped your sound?

I am a product of the world, you can hear I have a bit of an accent and the Russian-Jewish Klezmer in there and Israeli stuff. Moving so many times has made me more open to other cultures and I think you can hear that in my music, I love Brazilian and Afro-Cuban jazz and all kinds of jazz, probably because I love different languages and cultures. On a more deeper level, it would be very difficult for me to sing jazz at my age if I didn’t have a lot of heartbreak and loss. When I moved it was not like being a diplomat’s kid when you can go home for the summer, when we moved we were totally cut off, because there was
no money.

“Look At Me Now” is a big hit, who is was it written for?

My husband for sure. He’s eight years older than me, I was 21, he was 29 when we met. I was totally freaked out by the commitment. The lyrics “I’m not the girl who cared about love, oh look at me now.” Are totally about the course of our relationship. He used to mention weddings pretty early on and I’d be like eww! Oh look at me now!

Why did you cover “Till There Was You”?

When I was seven, it was one of the first English language songs I heard, My dad was a huge Beatles fan and they had covered it. When I was growing up in Israel we couldn’t 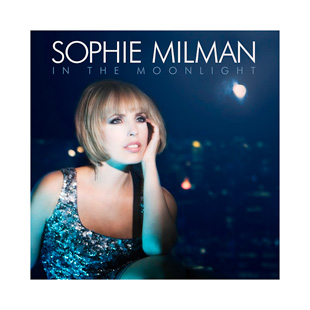 afford a car stereo, so I was the car stereo. Everything, from, the Platters to the Beatles, to Elton John, Queen to jazz and Disney I would memorize and Till There Was You you was the most requested song by my dad. I finally got the courage to record it now, four albums in and when I played it to him, he just cried.

Every time I’m here I just can’t help being really impressed, it’s a culture of perfection or striving for perfection and even though that can be unhealthy, it’s something that I can definitely relate to because I am so hard on myself.  I also really love the willingness to invest in culture, there are more music stores and book stores in Tokyo than anywhere else I have been to. In a world where record stores are closing most Japanese stores have huge back catalogues and vinyl. I think, why can’t more places in the world be like this? So all I can say is arigatou gozaimasu, stay the way you are! The music community needs you.

In The Moonlight Out Now