Eri Matsui is no ordinary designer, from an early age she was obsessed with mathematical patterns, shapes and the possibilities of science. As one of Japan’s hottest fashionistas, she has led her field for decades, recently presiding over the ‘Hyper Space Couture Design Contest’. Her desire to sculpt the future of clothing drives her to create astounding garments from the most delicate of materials. Matsui caused a stir in 2006 when an American couple tied the knot aboard a zero-gravity “vomit comet”, flight. The bride—who wore a specially designed Eri Matsui dress was dubbed the worlds first “astrobride,” by the Guardian newspaper. The flowing zero-g garment was designed to look good both on terra firma and in the weightless of outer-space.

Eri, how did you begin designing such high-tech clothes?

At first I was really interested in science and mathematics, I went to meet many mathematicians, neuroscientists and artists. I have been lucky enough to collaborate with many exciting people.

Why do weddings mean so much to you?

Last month saw the 50th anniversary of Yuri Gagarin’s pioneering spaceflight. Do you want to go into space?

Sometimes I think about it. But, no, I think it would be too stressful! I think we need to develop a sixth sense before we can go any farther away from the earth.

The first female Japanese astronaut Naoko Yamazaki must be an icon for you, what do you think of her standard NASA orange jumpsuit?

Those suits are purely functional, which can also be beautiful sometimes too. I met her several times, she is so nice and very smart. She is a great inspiration for so many people.

You make some incredible high-tech garments, how does traditional Japanese wear inspire you?

I love kimonos! I occasionally make them, even though I love technology, I still really like to wear kimonos.

I would always play with Barbie dolls and wrap them in handkerchiefs to make dresses, I always loved fashion. I always wanted to be a designer. Weddings are generally formal affairs and Japanese weddings are among the most organized highly planned in the world, you seem to reject those who think clothes should be fossilized in one particular style.

Most people think that formal wear should always stay the same, but they are wrong! It was all new at one time and gradually changed. Take the shape of a man’s suit jacket, the cut and shape has changed a lot, but it is still very smart wear.

How does mathematics influence your work?

I am very interested in topology and how everything connects together. I used the mathematica computer software and created golden spiral and Fibonacci sequence inspired patterns, and applied these to the human form.

Could you design a royal wedding dress?

I would love to design a dress for a royal wedding! It’s my dream. 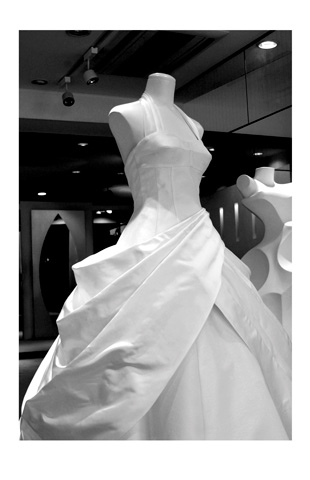 Virgin Galactic are offering flights into space for ¥16,500,000 how does your zero-g dress price compare?
Actually my zero-g dress was quite cheap! About ¥60,000—but it all depends on the textiles. We use very light weight cotton and polyester.

How about a standard wedding dress for those who want to stay on earth?

The public can e-mail my studio and request a meeting, the average price is around ¥85,000 up to ¥160,000. We have sample dresses in store, but we fit them specially to the bride to be. Often girls start crying when they try on one of my dresses, because they look so beautiful.

What is your next project?

I am publishing a book in both English and Japanese later this year entitled, “Sensing Garment”. It will collect all my work and ideas until now.

All photo’s courtesy of Eri Matsui.