The City According to Cao Fei

From the observation deck above RMB City, you look out and see the city docks, the ships leaving loaded with merchandise, and the office blocks, some strikingly similar to the famous skyscrapers of Shanghai. You see billboards thrust high into the sky, the highway curving around the coast, water sluicing down the city dam, and far in the distance, one of the city’s most major landmarks: the enormous bicycle tire monument called The People’s Observation Wheel. Never heard of it? That’s because the city exists only within the online virtual-reality platform called Second Life, and is an artwork developedby Chinese artist Cao Fei.

For those unfamiliar with Second Life, it is the brainchild of the company Linden Labs—an expansive online world which, unlike most multi-player online games such as World of Warcraft, has no particular goal other than to give its players a chance to do anything and be anyone. There are no rules, no levels, and no possibility of dying; and joining Second Life is free. But Second Life is also a thriving business, and its virtual currency, the Linden dollar, even has an exchange rate, allowing users to go into business for themselves, earning real-world cash. And what appeared to first draw Cao Fei’s attention seems to have been the fact that given the chance to create a world where anything was possible, people tend to create one that isn’t so far from reality.

For the 2007 Venice Biennale, she created a series of three ‘films’ made entirely in the world of Second Life under the collective title iMirror. One features a stream of images of ‘For Sale’ signs hovering over virtual property; another plays out the strange scenario of an online love affair and its unsurprising ending; and the last is  something like a bricolage of Second Life faces and activities, with clear echoes of the artist’s earlier works featuring young Chinese searching for their own identities. 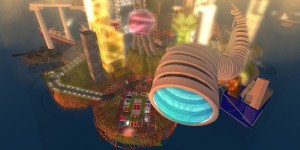 Since sending gallery visitors into a virtual world has obvious practical challenges, the Shiseido Gallery has chosen to keep the RMB City show limited to video works, including the three iMirror pieces. The centerpiece, however, is Live in RMB City—a film that follows Cao Fei’s avatar, named China Tracy, and her fictional Second Life baby through various parts of the city. The ingenue approach this film takes, with its vaguely existential questions about online life, is unfortunately a little cloying. But at oblique moments it points to the curious sterility of online life—that you can create mountains and oceans, build cities and relationships. But in the end, just as there is no death, there is also no new life. 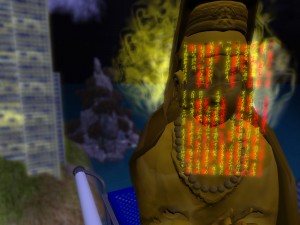 Shiseido’s show is a great portal for those unlikely to join Second Life themselves. But RMB City itself is the real critical artwork, reflecting many of the realities facing China. Here and there office buildings quite literally drop from the sky, toppling over and disappearing after they hit the ground, and a river that flows across the city slowly winds its way toward ‘The People’s Pond’—a gigantic toilet bowl, whose discolored contents flow steadily into the ocean.

Cao Fei is not the only artist making use of the Second Life platform, but she is doubtless one of the most high-profile. And as a result, RMB City has found a place in multiple exhibitions from Yokohama to London. But the city has a planned obsolescence date of two years, so you may want to get your virtual exploring in now.