It is something of a cliché about Japan that while its citizens enjoy the world’s longest life expectancy, the country has perhaps the shortest life expectancy for its buildings. Nowhere does this cliché ring truer than in Japans capital city, where buildings are erected and torn down at a truly staggering rale and 20 years is considered old age for a commercial or residential structure. Whereas 50-year-old photographs of London or Paris typically reveal cityscapes that differ little from their modern-day incarnations, one is hard-pressed to and anything recognizable in photos of Shinjuku, Ueno, or Ginza circa 1959. Numerous explanations have been proffered for Japans apparent indifference to its architectural legacy, among them a sense of inferiority vis-a-vis western urban centers, a reluctance to build for posterity in one of the worlds most earthquake-prone regions, and a notion of civic ownership in which landowners are considered the sole owners of their properties. Whatever the cause, Tokyo’s headlong race to the forefront of modernity over the past half century has come at the cost of virtually all of its historical architecture and, with the exception of its shrines and temples, there are few reminders that the city even existed 50 years ago.

There are, however, three very notable exceptions to Tokyo’s 20-year rule. The first is, of course, Tokyo’s grandest residential edifice, the Imperial Palace, which has stood as the capital’s majestic yet phantom-like epicenter ever since it became the official capital of the empire in 1868. The second is the National Diet Building, a striking modernist structure that was completed in 1936 and stands as a grand, if awkward, reminder of Japan’s militaristic past. The third standout among Tokyo’s still-working historical buildings is Tokyo Station. Designed by Tastuno Kingo, Japans premiere turn-of-the-century architect, and completed in 1914, Tokyo Station was designed as a grand entryway into the imperial capital at a time when a young, vigorous Japanese state was making its first foray onto the world stage. While virtually all other architectural icons from this epoch are long gone, Tokyo Station survived the Great Kanto Earthquake of 1923 virtually undamaged, was rebuilt following the firebombing of Tokyo in 1945, and has since survived modern-day Tokyo’s out-with-the-old, in-with-the-new development ethos. In a metropolis increasingly synonymous with showcase development projects such as Roppongi Hills and Tokyo Midtown, Tokyo Station is a true anomaly—a historical icon that has retained its role as a central transportation hub over nearly a century. It very nearly was not to be, however. World War II firebombing destroyed the station’s once resplendent basilica-shaped domes and third floor then hurried reconstruction work in the postwar years left behind a well working but decidedly less grand two-storey building with a purely functional roof. The subsequent decades saw the station sustain the wear and tear expected of an aged building and in the 1980s the metropolitan government announced its plan to demolish the station and replace it with an entirely new structure. ‘Ihe announcement resulted in a popular backlash highlighted by one of the most unusual—and successful—grassroots preservationist campaigns ever mounted in Japan. Armed with easels, canvases, and paint boxes, a band of watercolor painters descended on Marunouchi and set up outside the station, painting the building, and accosting passers-by, extolling the beauty of the old building. In an unprecedented move, the authorities acceded to grassroots pressure and in 1999 Tokyo Governor Shintaro Ishihara and JR East President Masatake Matsuda announced plans to renovate the dilapidated station as part of a campaign to revitalize the center of the city.

The ‘Tokyo Station City’ project, which was launched in 2004 and is expected to be completed in 2013, represents a dramatic depart ure from recent urban development projects in Tokyo. “With this preservation and restoration work,” announced JII Fast in a press release, “(we) will pass on to the future a historical building that is a cultural heritage and contribute to forming a distinctive part of the capital.” Among other things, the project will see the restoration of Tokyo Station to its original 1914 form, complete with its original third floor and glass ceiling domes. In addition, the Marunouchi side of the station is undergoing extensive redevelopment so as to create a broad plaza extending into a walkway towards the Imperial Palace, a portion due to be completed in 2010. Furthermore, the less grand Yaesu side of the station is also being redeveloped to include a 240-meter-long pedestrian deck and 10,700-square meter plaza covered with awhile sail-shaped roof, designed by the renowned German-American architect Helmut Jahn (whose credits include Bangkok’s new Suvarnabhumi International Airport). This deck, which will feature a wide array of retail outlets and overlook greenery in the plaza below, will open in 2013.

While Tokyo Station’s restoration has been widely applauded by Tokyo’s citizens, there is little evidence elsewhere of an overall paradigm shift in regards to preservation. Barely a stones throw from Tokyo Station, Ginza’s venerable Kabuki-za, another iconic building rebuilt in the postwar era, is slated for demolition in 2010, to be replaced by a modern, state-of-the-art theater with modern amenities, while the ribbon-like modernist Central Post Office, built in 1931, remains scheduled for the wrecking ball in spite of an ongoing campaign to save it. While activists continue to lobby on behalf of such buildings, Tokyoites, who have seen the destruction of beloved architectural icons such as Hibiya’s Sanshin Building, the Aoyama Dojunkai Apartments, and the grand old Frank Lloyd Wright -designed Imperial Hotel in the face of widespread protest, have in large part conceded to what appears to be a lost cause. “Unfortunately there is still not enough incentive for [developers] not to rebuild,” asserts Karen Severns, Tokyo-based filmmaker and co-founder of the non-profit organization WAAJ (Wrightian Architectural Archives Japan). “‘Ihere is so little left from the Showa period, let alone from Meiji or Taisho, that efforts like the restoration of Tokyo Station seem like too little, too late.” 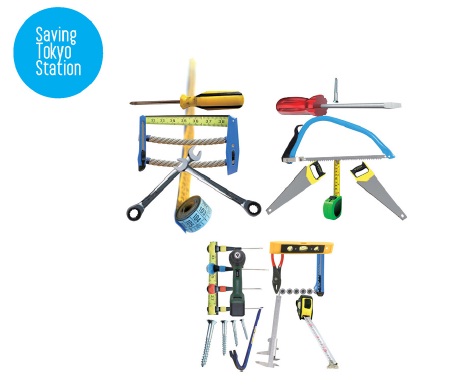 While Tokyo’s prewar architecture may be slowly but surely slipping into oblivion, Tokyo Station looks to continue to buck this trend and persist as a railroading icon to compete with New York’s Grand Central Terminal, Paris’ Gare du Nord, and Mumbai’s Chatrapati Shivaji Terminus. And while cosmetic upheaval will invariably continue to define the city’s urban landscape, the completion of the Tokyo Station City project will give Tokyo back its once-proud centerpiece after over half a century of postwar neglect.