An Interview with Herbie Hancock

Born in Chicago in 1940, Herbie Hancock is regarded as one of the true pioneers of modern day music. His contribution to the last five decades of music have been unparalleled, earning him multi-platinum selling records (49 albums to date) and every accolade from his peers, including 10 Grammys and an Oscar for his score for the film Round Midnight. Ben Meehan caught up with him on his recent visit to Tokyo to play a series of charity concerts.

How did you start playing music?
My parents bought me a piano when I was seven years old for my birthday; I started taking lessons three months after that. That was the beginning. Practice a lot? No not really, just about an hour a day. So you grew up a pretty normal kid? Well I had an older brother, and he would take me around with him and his friends, so when they played sports I was smaller than the kids his age so I couldn’t compete, I was like a little mascot! But when we all practiced piano at home, my older brother and sister and I, we were all equal in ability, I was no longer the mascot! So I lost all interest in sports, and was just about the piano after that.

The only thing I could
handle was a ballad… I
couldn’t play anything uptempo
I was too nervous!

What was the first record you ever bought?
I can’t remember! Honestly I have no idea, but I’ll tell you what I do remember buying, it has nothing to do with music, it was the first car I ever bought. In 1963 the very first money I made from music was when my song Watermelon man became a top 10 hit in America. At that time there were over 240 artists who recorded that track, and I got a check from the music rights organization BMI. So I spent the money on a car. It was an AC Cobra, it was a ford engine, but the body was an AC Bristol. It cost me $6,000.

You mentioned your song Watermelon man (Taking off 1963), right after that record you went into a period which undoubtedly was one of the highlights of your career, playing with Miles Davis. What was it like to play with him and what was it like when you met him for the first time?
The first time I met Miles was in 1962 not long after I moved to New York. I was 20 years old. I was introduced by the guy who, in a sense, discovered me, a trumpeter named Donald Byrd. I was his roommate and he was really like an older brother to me. Anyway he took me over to Miles’s place one day, and Miles said to me: ‘play something’ (said in his husky voice), so I was so scared… The only thing I could handle was a ballad… you know I couldn’t play anything up-tempo I was too nervous! So I think I played ‘My funny valentine’ or something like that and Miles said, ‘nice touch’. I was thrilled that Miles Davis had actually given me a compliment. So that was the first time, the next time after that I was kind of auditioning to join his group a few years later, and in fact I was hired and went on to play with him for five years.

What do you feel you learned over those five years?
Miles was the best person to be with, in a sense the best person to study with, because he was a real master teacher, he didn’t teach by telling you what to play or what the answers were, he taught sometimes by just telling you about stories and relationships he had with other musicians like Gillespie or Parker and the early pioneers of modern jazz. These stories gave you an insight on the heartbeat or life of the music. He also taught with just his playing, because what he did was pull it all together, I remember realizing what he was doing one night when I was building something up in a song and so were the other members (bassist and drummer) and it sounded like three separate things, but when he played it just incorporated what all the other musicians were playing and wove it all together like musical material, one coordinated sound, and suddenly it hit us like wow—we knew what we were playing. I think that was one of the  great characteristics of genius that he had that the average listener wouldn’t know, you only know this if you have played with Miles.

After playing with Miles you did the ‘Headhunters’(1973), probably the most progressive Jazz group of the 70s, it was the first Jazz album to ever go platinum, what made this group so new and progressive for that time?
The combination of Jazz with rock or funk influences, like we played with Miles, really was progressive, but what we did with the Headhunters was combine Jazz with Funk and R&B, which nobody had really done before. It kind of developed into a new pathway of the fusion period.

You reformed the Headhunters band in 2005 featuring new members most notably Bassist Marcus Miller. How did it compare playing the old songs with the new line-up?
Well the old guys created the sound, or the foundation of the music, and what the new guys did was put their own spin on it, which gave it a new twist. A lot of time had passed between 1973 and 2005, and their experiences were different from mine, and of course I had moved on myself and had a lot of new experiences, so we combined all these new vibes and called it ‘Headhunters 05’.

With your new music, how do you keep it sounding so fresh?
I always try and find new ways of looking at the music, bringing in new combinations of elements that I haven’t heard, played or thought before. I try and stay in the moment not thinking about ideas I had like five years ago, I want to have the spirit of what I’m feeling now… this second. I might use something that I played before but I will try and find a new way of looking at it so it sounds like nothing I have done before. 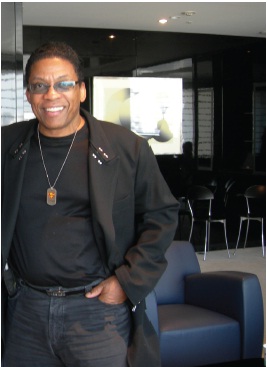 You mentioned John Mayer playing with you on the Headhunters 05’ album, you also played with him on your most recent album Possibilities. This album sees collaborations with an impressive list of very established artists and some new names, how did this album come about?
I had been thinking for some time that I had never done a primarily vocal record. I mean one obvious reason is that I’m not a singer I’m a piano player, but I thought after 40 years it was about time that I did one. I was also thinking that I never really attempted to do a record that involved major artists from the pop field, like Sting, Santana, Paul Simon and Annie Lennox, but I also thought it would be great to do something with some then relatively unknown people like Raul Midõn, who didn’t have a record out at that time, or Damien Rice who had only one. I wanted to cover a wide range of territory with an international flavor; the artists are from America, Europe, Africa and South America.

One thing about the pop field is that the general public tends to pigeon hole the artist, I mean I come from Jazz, and Jazz is not about that, it’s about exploring, so I really wanted to give these artists a chance to be three dimensional or to work ‘outside of the box’.

Who surprised you the most out of all the guests on the album?
The truth is they all surprised me! They all surpassed the dream that I had and took it further. One that particularly surprised me was Christina Aguilera, I mean I knew she could sing but what she did with A song for you which is really a beautiful song was astounding, it takes your breath away.

And Damien Rice suggested to do Don’t explain which is a song widely associated with Billie Holiday, I was like ‘really? Ok lets try it’, and then we got into the Studio I was like ‘wow’, it was so gentle and tender, it was amazing what Lisa and he did. Also Paul Simon who is very particular about what happens in the studio, he surprised me the most because he was really the one who created an air of spontaneity which made his track sound the most Jazz-like.

What was your favorite track on the album?
I like them all; they were all so different that they really don’t compete.

Will there be a “Possibilities II”?
Well I never like to do the same album twice but I think I have great idea for a follow-up album that I will start to work on when I get off this tour. You know so many great artist agreed to be on the album, but due to scheduling we never got to work with each other.

What artists will you feature on the follow-up album?
I can’t say, but I am looking forward to working on it!

You are in Tokyo this week to play a series of concerts for the Amway “One by One project for children”. How important is it for you to be involved with this charity for children?
Well it’s of the utmost important for me to be involved in the Amway One by One project because children are our future. This project raises money and awareness for various children’s charities such as children living with cancer, and not only through this wonderful work are they instilling hope in these children, but letting them know that they can fulfill their dreams and goals in life.

What I realize is these special kids have something to teach to the rest of us and to other children, and that’s courage. The courage to fight difficulties, problems, illness; anything. It teaches us to fight for what we believe in…