Peddling for peace in times of war

It seems like every time we open the newspaper or turn on the television, we are bombarded with tragic stories of war and hatred. Most agree it seems to be getting worse, not better—a scary thought.

It got to the point that I did not even want to stay “informed,” as it only made me more depressed. I simply wanted to get away from all the negativity being created by the media, especially in my homeland of America, and see if I could do my part to help create some much-needed change while at the same time following my passion—cycling.

My best friend Garryck Hampton and I dreamed of an around-the-world bicycle trip since we met in college. More than 10 years later, in January of 2001, we decided not only to pedal our bikes through 100 countries over a five-year peri­od, but also to deliver a message of peace, love and hope to the world while doing so. We didn’t want to just preach peace, we wanted to live it every day in every country we visited. 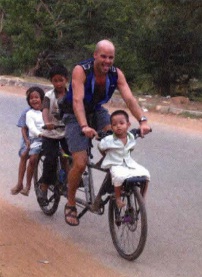 We decided to take our mis­sion to a new level. We formed our own two-man organization called the Peace Pedalers (www.peacepedalers.com) and what started as a whimsical idea has evolved into a worldwide humanitarian adventure of peace, tolerance and understanding. We feel it is a chance to do our part in creating last­ing change in the world one pedal stroke at a time.

Getting the wheels turning

From the beginning Garryck and I poured our hearts and souls into the Peace Pedalers project. This passion led to many of the wonderful aspects of the Peace Pedalers today, now more than 15 months and a dozen countries into our worldwide expedition.

It all started with the two unique tandem bicycles Garryck, Peace Pedalers’ “Technical Team Leader,” custom designed. The bikes are one of the most impor­tant aspects of our mission, as they enable us to tour the world leaving one seat per bike free. This allows us to share the tour with people of different cultures, beliefs and values. Our dream was to pick up guest riders from around the world and today that vision is a reality. The “Worldwide Invitation to Ride” is alive and well.

Back in the planning stages, I lived and worked in the U.S. searching for sponsorships, fundraising and building the Peace Pedalers identity while Garryck was living in Korea teaching English and planning most of the technical aspects of the ride. Our dream slowly became a reality as we got closer to our April 2002 departure for Japan and the beginning of the journey.

It was nine months after we formed Peace Pedalers that the tragedy of Sept. 11 hit our home country. The irony of this event as we were planning to head out into the world sharing peace and love was just too much for us to chalk up as coincidence. Neither of us considered ourselves anti­war activists and, to this day, you won’t see us preaching or protest­ing. But you will see us living peace, tolerance and acceptance and holding onto our genuine intentions of making the world a better place through our daily actions. 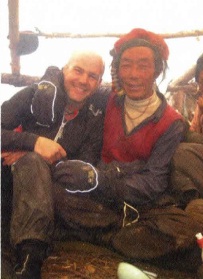 Many people still ask, “Are you still going to travel to 100 countries, with all the hatred towards Americans?” Without hesitation we always confirm our decision to ride as planned. We have total faith and conviction in our mission, and we both realize we can’t change the world overnight. But our small acts, we still believe, will be reciprocated on a global scale with each mile of the journey.

Sharing the message and reaping rewards

Our expedition has already been filled with amazing experi­ences. In Japan we rode with peo­ple who lived through the atomic bombs. We camped in World Peace Park in Hiroshima and went to the Earth Celebration on Sado Island. We joined the internation­al community in Korea for the soccer World Cup where, just a few kilometers up in North Korea, a lunatic is building nuclear weapons.

In China we toured lands where scars of war, intolerance and ego-centricity can still be seen today. It was in China where we picked up an Australian guest rider, Jane Hoptcraft, who is suf­fering from chronic arthritis. We challenged her to ride through the pain and let the health benefits of cycling help heal her. She took us up on the challenge and made it through with a huge smile.

She was so inspired, she canceled her ticket back to Australia and founded her own around-the-world bike trip called Spokes for Hope (www.spokes4hope.com) rais­ing awareness and inspiring peo­ple with arthritis and rheumatism.

In Tibet, I gave a ride to a woman who was on her way home. After many smiles and a hug goodbye, we both went our separate ways, both changed by the experience. I hope the next foreigner who comes into her vil­lage will be treated with more openness, trust and acceptance. In Nepal we invited two Nepali guys to ride with us for an eight-day, all-expenses-paid trip of their country in the middle of the Maoist terrorist region of Western Nepal.

We rode by bomb craters in bridges and ate at a restaurant where police officers had been killed by gunfire just a few days before. In India, we arrived in Bombay just a few days after ter­rorists blew up a bus, and the fear was still palpable.

My most memorable guest rider was in India in December 2002. One day we saw a guy sitting at a bus stop waiting for a bus, and I stopped to offer him the chance to come ride with us. “Namaste! Would you like to ride with me? We’re going the same way,” I asked pointing to my empty rear seat.

“Sure, why not?,” he replied with a look of amazement and curiosity to which we have grown accustomed.

We began pedaling down the road and shared some small talk. I discovered his name was Hamid, or at least that’s what I under­stood through his accent. Turns out he is a devout Muslim and was on the way to his village. I told him I was an American and, not knowing how he would take it, I just waited for a reply. The truth is he didn’t care where I was from.

As I looked in the rear view mirror, I saw he was smiling from ear to ear, looking around and enjoying the sunshine, the fresh air, the exercise and the experi­ence of riding in the exact rhythm as this American stranger who had invited him into his life.

When we arrived at his vil­lage, he showed me his mosque and explained his rituals to me. We shook hands, looked into each other’s eyes and had a genuine mutual exchange. He will no doubt share this experience with the other Muslims in his village and hopefully our positive experi­ence together will help create some change — somehow, someway.

The journey continued to Thailand, Cambodia and Laos where we rode with dozens of locals. In Cambodia, a country with a recent history ridden with war and terror, we found some of the friend­liest and open people anywhere.

We’ll continue to pedal for peace in times of war, opti­mistic we can put in motion a movement towards peace and understanding. We’ll give big and live big, encouraging others to have the courage to do the same.

If you want to drop us an e-mail, check out our progress, support the cause, or even come out and ride with us, feel free to check out www.peacepedalers.com
We would love to hear from you.

When the wheels stopped near the famous torii gate atop Mt. Fuji, Keegan Reilly became the first paraplegic climber to summit Japan’s most sacred mountain under his own power. Keegan, 23, lives in Portland, Oregon, and Mt. Fuji marks the third mountain he and the Strong Arm Expeditions team have conquered. It is, howev­er, their first climb outside the United States and, although they admit it was not as technically difficult as anticipated, it took a lot of teamwork and determination to make it to Japan and up the 3,776-meter mountain. The trip was in jeopardy before it got off the ground – liter­ally. Keegan’s custom-made, titanium climbing bike wouldn’t fit through the airplane doors in Seattle, but they finally managed to get it in. The next obstacle appeared on the mountain itself in the form of a safety officer just above the 5th station. The officer refused to let Keegan pass, saying mountain bikes were not allowed. After some tense meetings and an eight-hour delay, it was discovered that no rule exists, and the officer did not have the authority to stop them. The damage had been done though; Fuji Television, filming the climb, pulled out of the project. Although the team was camping on the mountain, the network had agreed to provide transportation to and from Fuji, and lodging once they finished. Thankfully, the U.S. Army stepped in to help with the climbers’ gear, and Inn Fujitomita, a local Japanese guesthouse, offered them free lodging.

At 10 a.m. on the fourth day of the climb, a day ahead of schedule, Keegan reached the summit and his goal of making the first arm-powered ascent of Mt. Fuji. It’s his hope the climb will inspire people with disabilities to push their limits and raise awareness in Japan, and others to get out and explore the environment around them.