Tending to the Wild flowers

Misao Hanazaki’s Nonohana-no-ie is a refuge for orphaned, abused and neglected children. Here, kids from both Japan and abroad find what is missing in their lives— love.

They all go to the same high school—just down the road from their home. Yuka, 17, works part time as a waitress at a Chinese restaurant. Tsugumi, 15, works in a cosmet­ics factory. Both are saving to buy cell phones—they simply can’t spend another day at school without one, they say.

Sitting opposite them is Junko. She is too busy for a part-time job. As the fastest 17-year-old girl sprinter in the region, she spends her time at All-Japan Track and Field meets.

Not that they are sisters. They live together at Nonohana-no-ie — an international children’s home in Kisarazu, Chiba Prefecture. Junko has been here for seven years, Tsugumi, five and Yuka, four. 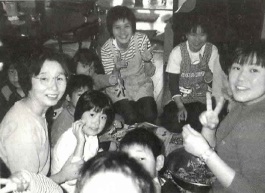 Nonohana-no-ie (“Wildflower House”) is home to 40 children, aged 2 to 18, and is one of a handful in Japan that opens its doors to both Japanese and non-Japanese children. Youngsters from Colombia, Kenya, the Philippines, Thai­land, Vietnam and other countries grow up together here. Most of the children are here because they have been abused or abandoned by their parents.

Caring for the kids is a dedicated group of staff members, led by founder and director of Nonohana-no-ie, Misao Hanazaki.

In 1969, Hanazaki worked at an International Children’s home in Switzerland and, on returning to Japan, spent 10 years working for the Japan Association of Psychiatric Hospitals. In 1981, Hanazaki became a foster parent to the first of five children, a 17-year-old Vietnamese girl. Then came Nonohana-no-ie.

Since it opened, the home has seen about 180 kids pass through its doors. Most chil­dren stay for at least one year, although recently some have stayed short-term, when the mother has been hospitalized and there is no one else to care for them.

Whether the child has been orphaned, beaten, abandoned, or if parents simply cannot cope, Nonohana is there for them.

“The home is rehabilitation for the heart and soul,” Hanazaki says. “We want the children to feel they are in a secure environ­ment and feel relaxed.” In many instances, the child has just escaped exactly the opposite.

According to Hanazaki, new laws and increased reporting goes some way to explaining the figures. But abuse itself is also on the rise.

Hanazaki sees the root of the problem in the changes in post­war families.

“The increase in nuclear fami­lies means many parents never see other parents raising kids,” says Hanazaki. “So when it comes to raising children, they find it too difficult, so they kick and hit them. They can’t vent their frustrations on their extended family, so the stress is let out on their kids.”

Hanazaki believes the extended family is vital in rais­ing children. “In Japan, the cul­ture of raising children was there, passed on from one gen­eration to the next, but this slowly disappeared,” she says.

Hanazaki continues: “In the ’60s and ’70s, younger people came to the bigger cities. Confucian thoughts of taking care of the elderly were left by the wayside. This was a misinter­pretation of U.S. culture.”

The result of all this was young Japanese couples battling to raise kids in a big city, hindered by a lack of day-care cen­ters or support and training for working mothers and new par­ents. And then along came the bursting of the bubble and a whole host of added problems for families.

Hanazaki makes an effort to talk to the parents. “At the end of the day, the kids want to be with their parents,” she says. “Many parents know they are abusing their kids, but there is no ade­quate system in place to help the parents.”

Nonohana-no-ie’s priority mission, however, is to raise the children. “Of course we love to look after both, but ins impossible,” she says.

To look after only the chil­dren is a big enough job. Among the 550 children’s homes in Japan, there is a serious shortage of teachers, mentors, volunteers and professional counselors to care for the 30,000 children liv­ing in the homes. There is also a need for smaller group homes — ideally a six-to-one child-to-teacher ratio. The depressing reason for the shortages, as is often the case, is lack of money.

With Hanazaki advising, the Ministry of Welfare is tak­ing action. An outline has already been drafted to train foster parents.

Training programs have also been put in place at Nonohana-no-ie—for the kids. The home arranges company visits for the older ones, much like “take your daughter to work day.”

As the boys and girls approach adulthood, these visits give them the opportunity to see the world of work in motion, hopefully encouraging them to pursue an education. Coming from a multicultural children’s home, the trips to international workplaces such as The Japan Times office enriches the cross-cultural understanding the chil­dren already have.

Many children, after flying the Nonohana nest, come back to visit. The love and support they have been given by Hanazaki and her dedicated staff has helped some find employment, stability and love in their life away from Nonohana.

Hanazaki believes the children can grow up properly if loved and cared for, and encourages all of them to have their own dreams and aspirations.

Junko, the 17-year-old sprinter already knows what she wants to do when she leaves:

“I want to work in a place like Nonohana.”