The plight of Japanese women

On the train from Narita airport, I was surprised to see a Japanese man take the last seat in the carriage, leav­ing his wife to stand. I asked my companion about this happenstance, and he said it was quite normal in Japan. I thought that perhaps I’d been over-exposed to the English “ladies first” tradition, and with time, it would all seem fairer. It didn’t.

During the next few weeks I saw couples out walking, and quite often noticed that the man would walk a few paces ahead of the woman. At dinner with Japanese friends, the wife not only did all the running around, but also was told off when she spilt a glass of beer. The husband even apologized on her behalf: “I’m sorry about her,” he said.

It appears that women are not regarded with as much respect as they are in the West. Is this because the women’s movement in Japan is a few years behind the West, and Japanese women have yet to chain themselves to railings and burn their bras? Or is the situation just different in Japan?

Some Japanese women are pushing for change, and they are definitely becoming more visible in society. For instance, there are 35 women in the Upper House, and women are even venturing into space. Chiaki Mukai will be the first female Japanese astro­naut. In 1994, she is to take part in a 13-day space journey aboard the space shuttle Columbia.

Although changes are taking place, Japanese women certainly have a tougher battle ahead of them than women ever had in the West. They are fighting a history of being treated like a lesser species. This attitude is so deep in the culture, it may take a very long time to disappear.

Bryn Dolan, a sociologist who has done extensive research into the position of women in Japan, explains that women have historically not played an important role in society because there has been so much fighting in Japan. “From around 1083, the Japanese fought both amongst themselves, and with neighboring countries,” he has said. “This forced women to stay at home.”

Dolan says he believes the restrictions on women’s behavior began during the Edo period, 1603-1868. “Women were consid­ered useless to the pursuit of war,” he informs us, “and were regarded with overt contempt. The only place they were valued was in the home and this is where the saying ‘Good wife, wise mother’ came from. Unfortunately, it is still recognized today as the ultimate goal to which a woman should aspire.”

It’s a good thing some of the ideas from the Edo period have been dropped; otherwise, husbands would still be chopping their wives’ heads off if they so much as suspected them of being unfaithful.

The men, on the other hand, had never had it so good. The Samurai warriors were allowed to sleep with as many concubines as they could afford. They didn’t even have to have children with their wives; it simply didn’t matter who the mother was. The social status of the child was determined solely by the fa­ther—and samurai women were regarded merely as hara wa karimono: borrowed wombs.

Today men still regard it as acceptable to have more than one woman. I’ve seen men flirt openly with office ladies despite everyone knowing they have a wife and kids. No one disapproves, and other men encourage them. Mistresses are common, hostess bars are seen as an appropriate business meeting place and a sex tour is regarded a macho holiday option. 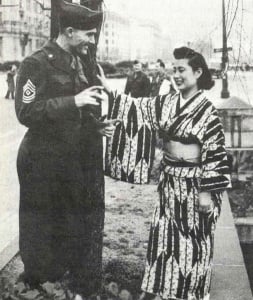 Women have never been able to do much if they get fed up with their husband’s behavior. During the Edo period divorce was almost exclusively a male privilege. If a man did divorce his wife, she felt ashamed; she was always blamed for the break-up of the marriage. The law permitted men to divorce their wives for the most trivial of reasons; for instance, talk­ing too much or being jealous.

Even today, women need their husband’s per­mission to file for a divorce, and still feel ashamed if their marriage breaks up. A good friend of mine is divorced, but in the year I’ve known her, she’s never mentioned it. If women are divorced, they keep quiet because it can still count against them as far as their career and future relation­ships are concerned.

One of the reasons men have an easier time as far as reputation is concerned could be because the Japa­nese believe that men are superior to men . This is reflected in day-to-day living. Men are the first out of elevators, they get served first in restaurants and are offered a drink first at parties.

This “gentlemen first” approach is second nature to the Japanese as it is instilled from childhood. On trains, a mother will give the seat to her son be-fore her daughter. At school, boys are called on first.

Some Japanese men I’ve spoken to are eager to back up these attitudes. For instance, Hisano, a 55-year-old salaryman, says: “Japanese women like men to be stronger than them, and they also like looking after the home; it makes them feel feminine. This is just the Japanese way and it is very difficult for gaijin to understand.”

Historically, women have been taught that strong personalities are unattractive to men. During the Edo period, they were told that the qualities women should have are: gentle obedience, chastity and mercy. Not only does history put them under pressure to behave in a feminine way; the Japanese language also does.

Otoko masuri, for instance, means “male surpasser.” This is a woman who excels over men in some way, but Japanese women certainly don’t aspire to be de­scribed as one. The term is a put-down, as it not only implies extra ability, but also a lack of femininity.

Some women aren’t conforming to society’s pres­sure to become a good wife and mother. Having observed the unhappy marriage of their parents, they are looking for more than just marriage and pursuing competitive careers.

It is a minority of women who are getting to man­agement levels; most are still making tea and doing personal errands for their male bosses. They are less likely to get promoted than men, as most bosses be­lieve they will only be working for a couple of years-just until they get married. This attitude is reflected by the women themselves. In 1991, 107,000 gradu­ates settled for “office lady”—OL—jobs, saying they do not want to work long hours. They really are just waiting to get married.

However, attitudes are changing and the number of females in the work place is increasing. Many are marrying later because they are keen to get on with a career. And circumstances are even improving for those who wish to continue work after they are mar­ried. For instance, a maternity leave law was intro­duced in the summer of 1991. Attitudes have yet to change in the home before women can have really challenging careers.

Take 24-year-old Kimiko, for example, who got married 18 months ago and chose to continue working at a travel company in Tokyo. “My husband’s train leaves at 6:30 a.m., so I have to get up at 5:30 each morning to run his bath and cook rice for his breakfast. I don’t have to get to work until 10 and I leave my office around 6:30 p.m., but I don’t eat until 10 at night which is when my hus­band gets home. It’s usually midnight before I get to bed.” Although men no longer call women “the flower of the work place” and regard them as mere decora­tions, they still tend to be suspicious of women’s abil­ity and don’t think they are capable of much more than simple office chores. The thing which will possibly have the most affect in changing the sta­tus of women in Japan is the labor shortage. Although this has been off-set by the economic slow­down, the Labor Ministry has expressed con­cerned about the long-term implications of this problem, caused, in part, by the low birth rate in Japan.

The ministry officials see women as a vital source of labor for the future and is taking steps to further encourage them in the work place. It’s trying to abol­ish sexual discrimination at work and to ensure equal opportunities in recruitment, promotion, welfare pro­grams and so on.

There is evidence of gradual change in Japan’s at­titudes towards women and the betrothal of Masako-san to the Crown Prince is bound to effect women’s perception of themselves. The Japanese are very much into idols and, who knows? Young Japanese girls may see Masako-san as a role model. Perhaps they will dream of being torn away from a brilliant career by a besottled admirer, to become a good wife and wise mother long after the marriage age deadline of 25. Should this be the case, it will do wonders for the labor shortage.