Of all the English-language churches in this city, the Tokyo Baptist Church is the one that celebrates almost entirely in music. Sunday services consist of end-to-end hymns and devotional music. Not a spot of liturgy here, minimal scripture readings and mini­mal prayer, rather the morning begins and ends with shake-me-up songs.

“Amen” and “Praise the Lord!” are heard aplenty, and if you’re sitting still at the end of it all, then obviously one of the other churches would be better for you. You have to either like or ignore the crusader rhythm of the place.

Founded in 1958 when Japan had pulled itself out of the rubble of the war and was looking for­ward to hosting the Summer Olympic Games, Tokyo Baptist Church was built to reach out to the Japanese community and the U.S. military stationed in great numbers in the Tokyo area.

The church is self-governing but affiliated with the Japan Bap­tist Mission and the Southern Baptist Convention whose For­eign Mission Board has been helping support the church throughout the years. The church has recently been advised that five years hence, the apron strings will be cut and, by 1997, its financial ties with the Southern Baptist community in the US. will be severed. Ouch!

There’s an awful lot of hand-wringing going on about this at the Shibuya-located- people from more than 35 countries.

On top of that uneasiness is the fact that Interim Pastor Wil­liam Warmath has just left Japan and his post here is vacant Bill Morris, the new Associate Pastor for Music and Educa­tion, agreed to let us run this piece in the Weekender in spite of all these uncertainties.

He said he feels it’s important for people to know the programs of the church are continuing in spite of setbacks. “Let them hear about us, warts and all,” he allowed. By the way, if for no other reason, it’s worth going to Shibuya just to hear Bill’s spiritual rendi­tions of old hymns. He’s 100 percent committed and that’s nice to be around.

Another person nice to be around is Marilyn Curtis. She’s been running the Weekday Ministry Program of the church for 10 years. Ultra-dedicated and high energy, she is the big southern “hello” you are likely to get on the phone when you call the church. (You will have to call for directions, but more on that later.) There is not a negative bone in her body. If you can’t make it to the beach this summer, go to Shibuya and catch some of her solar rays.

Together with Robin Dorsett, another sunny soul, they run a lending library of more than 6,000 English-language books ranging from Tropical Fish to The Expositor’s Bible Commentary. That’s in addition to a Japan corner and magazines and cassette tapes to take out, and there’s no need to be a member to borrow books. 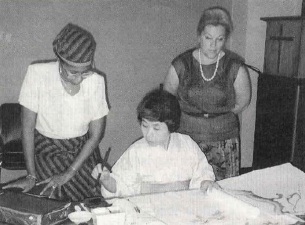 Together they also oversee the 30 classes held in the three-story church building. Subjects include In­ternational Bible Study (it was manseki, not an empty seat in the house on a recent Wednesday morning), Slimnastics, Red Cross CPR, Japanese History, Luna Flora, Artificial Bonsai, among others, all taught in English by qualified, certified instructors.

A corollary program of the Tokyo Baptist Church is the full-time chapel service they run at the Hotel New Otani. Created by W. “Dub” (down-home shortcut for double-u!) Jackson to stimulate interest in Christianity, the good pastor recently revealed he has converted 117 people to Christianity this year alone. Maybe a future piece for this column would be a look into this unusual ministry.

“Dub,” the founder of the Tokyo Baptist Church, has just gone back to the States for some R&R and will ship out soon to Singapore where he’s been in­vited to start an identical ministry at the Raffles Ho­tel. Room service, anyone?

Meanwhile, Dick Horn, pastor at Tokyo Baptist Church throughout the 1980s, is back in Japan to start a mission in Nagano-ken. “With the activity going on up there to prepare for the 1998 Olympics, we see an oppor­tunity to take advantage of the openness of the local community to ideas from the outside,” says Pastor Horn, referring to the claustra-jingoist tendencies of rural Japan.

Just a comment on the vari­ety of nationalities in the congre­gation. Their vitality may be felt and there’s no effort at homog­enizing. “We’re different from each other and let’s celebrate that,” seems to be the principle at work. Sitting in as a very special guest of the African Fellowship which meets once a month, I watched parishio­ners from Zimbabwe, Mali, Nige­ria, Kenya and Senegal come together to share witness.

Even though they all fall un­der the African banner, they are vis­ibly from different cultures. It’s a struggle, no matter which way you slice the pie. Speaking of which, fellowship was preceded by a well-balanced lunch of Af­rican specialties like chicken in ground peanut sauce. Hot stuff!

“Sister, you can’t pray good if your stomach’s empty,” ex­plained leader Kenneth Kanu from Nigeria. (Loved that soul food and thanks for sharing it with this visitor from the Other Continents.)

About the church’s location, we could blithely say it’s on Kyu Yamate-dori near the Malaysian Embassy. Fact is, it’s a 25-minute walk from Shibuya Station, if you pick the correct tentacle on the octopus of high­ways that converge on the city sub-center. My suggestion: call ahead and have a church person meet you at Hachiko on your first visit.