This is the concept behind Lisako Ishigami’s jewelry brand, Moil (stylized as moil). The Japanese silversmith is known for designing big, chunky rings cast in silvers and golds, holding large rutile gems shot through with nature’s needles of color. Her earrings gently place naturally-shaped rutiles and free-form pearls upon the ears.

Maintaining the organic shapes of pearls and gemstones is key to the brand image. Ishigami emphasizes that each piece should be worn in harmony with its owner. “Everything is designed to retain its distinctive presence” she says, “while blending in with its wearer’s silhouette.”

It’s a concept that has resonated internationally. Since its launch five years ago, the brand has exhibited at venues including Spiral Gallery, Omotesando and privately in Paris. It has appeared in Photo Vogue and been sold in stores, such as Lumine in Japan and A Beautiful Store in Hong Kong.

Ishigami grew up in rural Japan and has been fascinated by art since childhood, growing up by the sea. She drew pictures on found objects, crushing flowers herself to make colors. “I especially liked oshiroi-bana [four o’clock plant].”

In retrospect, she tells us, her childhood pastimes influenced her work on Moil. “I used to pick up stones from the ocean and rub them on the asphalt to polish them.”

After school, Ishigami went on to study textile design at art university, before moving to France, where she studied haute couture in Paris. Upon returning to Japan, she worked as a textile designer and took a job as an art assistant at her old university, where she currently teaches.

Ishigami started Moil in 2017, as a creative outlet. Influenced by her time in the French capital, she draws inspiration from the antiques culture there. Ishigami aims to make the most of natural beauty of each free-form pearl and naturally-shaped gem. She sees this as a concept rooted in Europe. 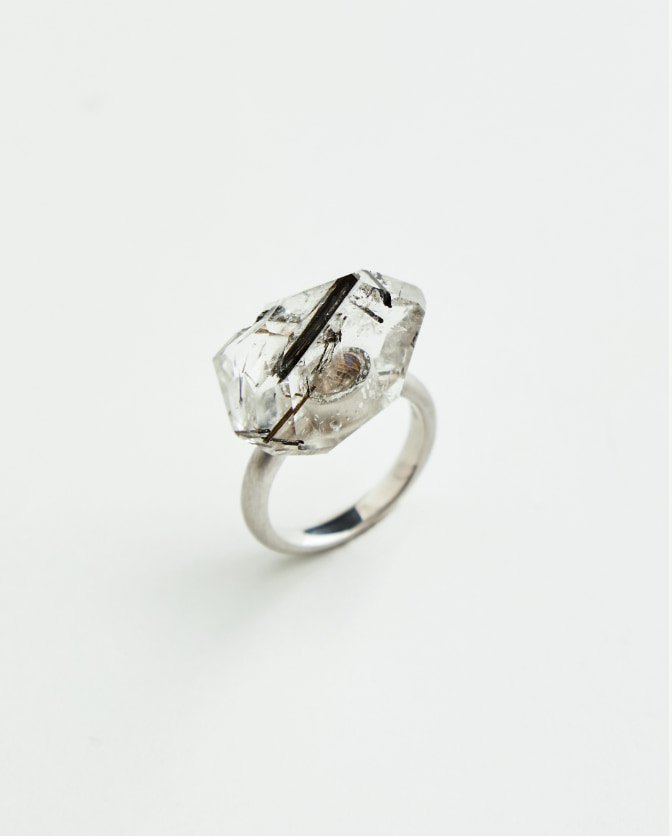 The roughly hewn shapes of both silver and gold in Moil’s designs stand out, each shape cut to complement the stone it holds.

Ishigami mainly uses rutiles, shot through with inclusions – the glittering needles of gold, orange, even black that run haphazardly throughout.

She rarely recuts a stone into a specific shape. Instead, she enhances its natural form by polishing it in different ways. The first type is minimal polishing, which Ishigami describes as “icy,” and which appears more natural to an observer. The other type is a smoother, shinier polish, designed to reflect light in a more conventional, jewel-like way. In many of her designs, she uses both methods of polishing on the same gem, to enable its natural beauty to be appreciated in a variety of ways.

Ishigami makes all the jewelry in her small atelier in Tomigaya, Tokyo. Her designs vary widely, taking anything from one day to up to two months to complete, with gemstone jewelry usually involving the most hard work.

Whether a shop-bought piece or something custom-made, Ishigami works hard to ensure that each Moil piece meets her high standards. Each ring or accessory is carefully inspected before being put on sale in the store or sent to customers.

The standard process from start to finish takes 10 different steps. “First, I’ll make the prototype and mold it using rubber. Then I pour wax and cast it into the metal. After that, it’s a case of polishing and casting the stones,” she explains. There are two different steps taken to polish a ring – both before and after the stone is set.

An artist at heart, Ishigami is always keen to experiment and to try her hand at something new. “I also have an art line called ‘moil O,’ of one-offs, for which I don’t make molds,” she says. Moil O features pink tourmalines and deep blue lapis lazuli, making it noticeably more flamboyant than her original Moil brand.

A Few of My Favorite Rings…

Asked what her favorite type of ring is, Ishigami doesn’t hesitate. “Rutile rings. I feel that the inclusions within the stone make me even more appreciative of the blessings of nature that accrued to form it.”

This will be no surprise to followers of Moil — the brand offers several designs of thick silver banded rings and stud earrings set with rutile stones.

Ishigami — ever dedicated to her craft — wears chunky silver rings as her day-to-day choice. With the full range of Moil at her disposal, styling her hands is an integral part of her routine each morning.

She tells us she likes playing with the ring combinations.

“I hope my customers can enjoy stacking Moil jewelry in this way too.”

Check out more of the Moil range at: