It’s the summer of 2017. Tomoyuki Sao’s oldest daughter, Riri, a third grader, arrives home on the last day of school before summer vacation with an assignment. The task is to research and address a specific environmental problem. Living on the small subtropical island paradise of Okinoerabu in the Amami archipelago, grand scale climate issues seem a world away, but Riri and her siblings identify an issue much closer to home: the trash on Ujiji Beach, which is just a short walk away from their house. They spend the summer cleaning up garbage that has drifted ashore, using their allowance to buy trash bags as they gather copious amounts of washed-up garbage.

A First Step Towards Environmental Awareness

As the children continued their assignment, they noticed that many of the pet bottles and other items they collected mostly had foreign language labels. They discovered that much of the garbage floating around their favorite beach came on the Kuroshio Current, bringing waste from all over the Pacific Ocean and beyond. Soon, summer vacation was over and the assignment was due. However, the children wanted to continue and what started out as a teacher-led task soon became a morning ritual. Thus, Ujiji Kirei-dan (Keep Ujiji Clean Group) was born. 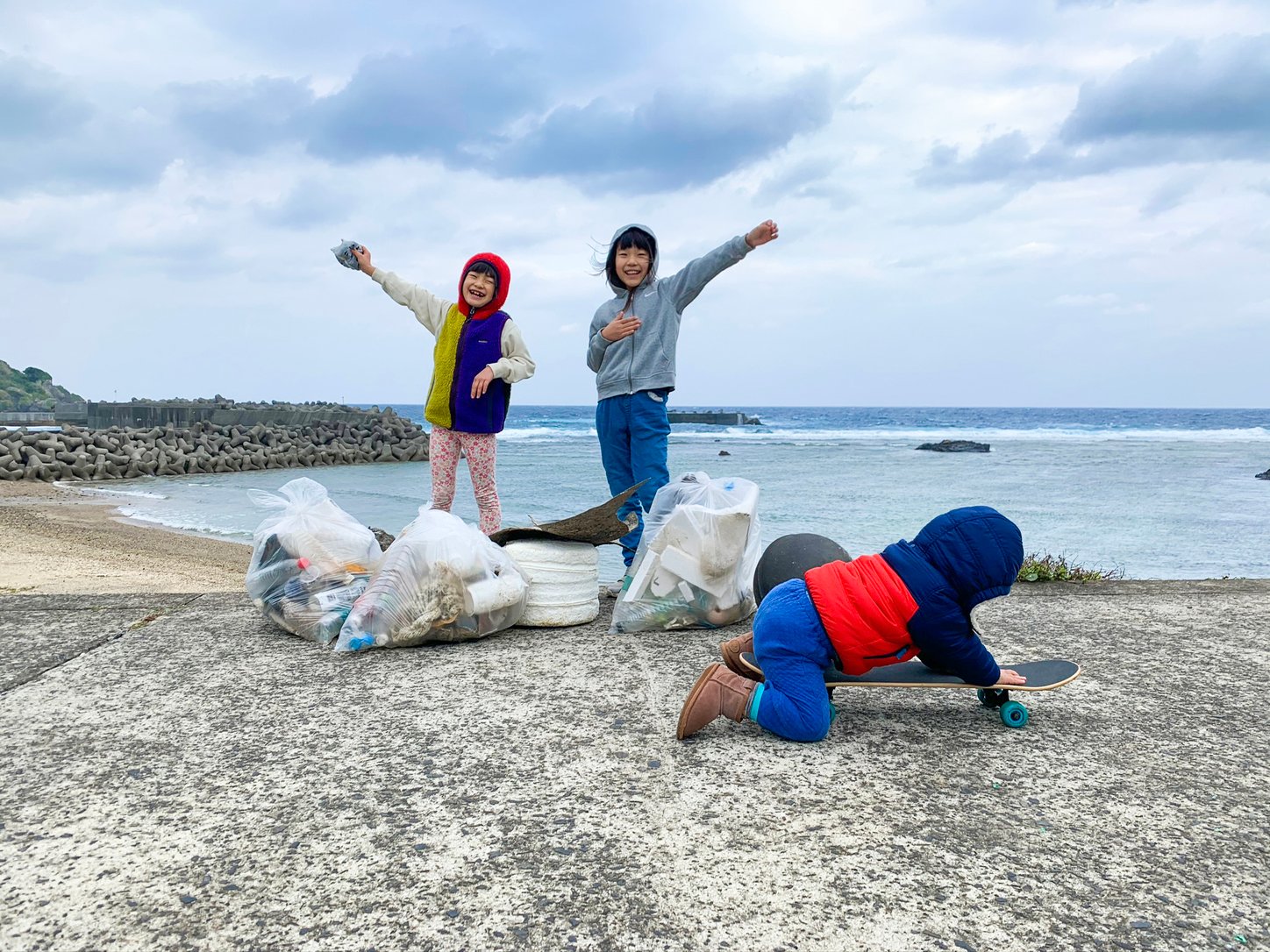 A Burden Not Theirs to Bear

Sao believes they are doing something positive but he still wanted the kids to stop their daily cleaning once the summer project was completed. He says, “It’s not right that children should be doing this. It shouldn’t be their burden to bear. They didn’t cause any of this. But the reality is that the ocean is filthy and children simply want a clean beach to play on. They wish the trash would disappear from the ocean and the world at large, but as a parent, I know it’s not that easy. We see the destruction humans cause to plant life, animals and their habitats.”

Though the children no longer need to pay for trash bags themselves — the local community has offered support by providing free garbage bags and waste disposal for everything collected — they cover their costs and earn some spending money by selling educational microplastics kits and speaking at seminars. They do not accept donations, as Sao emphatically believes that the children should feel they have earned the money and feel comfortable spending it on themselves to do fun kid things. “A donation comes with strings attached. It should be used for future activities. I don’t want to put that pressure on them and instead use the money they earned in any way they like,” he says. Four years since the first homework assignment, the daily beach cleanup routine has become a family affair. The girls and their younger brother, accompanied by one or both of their parents, go out to the beach every morning for about 10 to 15 minutes around sunrise. Sao explains, “We just happened to continue. Now, it’s like a hobby. We do what we can every morning before they go to school. It’s a daily routine and gives us some quality family time. It’s also motivating to complete a task at the start of the day. It leaves you fully charged and ready to go.”

The Sao family motto — of which there are several — leads “Love and peace,” emphasizing compassion for others. Their other guiding principle is critical. Sao sums it up as a mission statement. “Our goal is not to eliminate trash, but to protect the small lives of animals, plants and other life forms.”

It would be impossible for them to remove all the ocean garbage on their own and would end up feeling like a futile effort. Instead, they choose to do what they can with what they have. “It’s why we clean with our hands and not with large machines. Otherwise, we would do more damage to the environment,” Sao says.

He stresses that their activities are children-led, informal excursions. Living on a small island with few residents, the potential social pressure of organized events would cause unnecessary conflict. Instead, they keep it casual and share their updates with friends and family on a private Instagram account. That way they can inspire others to take action on their own, without making them feel obligated to join this particular activity. Now that they and others are picking up more trash on the beach and elsewhere, there is a noticeable difference on Ujiji Beach. Most of the garbage is now in the form of tiny microplastic pieces, which need to be picked up using tweezers.

At home, the Sao family sometimes use the microplastic to make art. They hang their works on the wall, creating both a fun activity and a learning opportunity using the materials at hand. It’s easy for the children to understand and process. They even made some wall art near Ujiji Beach using blue and orange buoys for photo-hungry visitors to use as a backdrop, and hopefully get their message out in a simple but effective way. Visitors are encouraged to come take photos and enjoy the beauty of Okinoerabu, and leave with the seeds of inspiration to improve their own community once they return home.