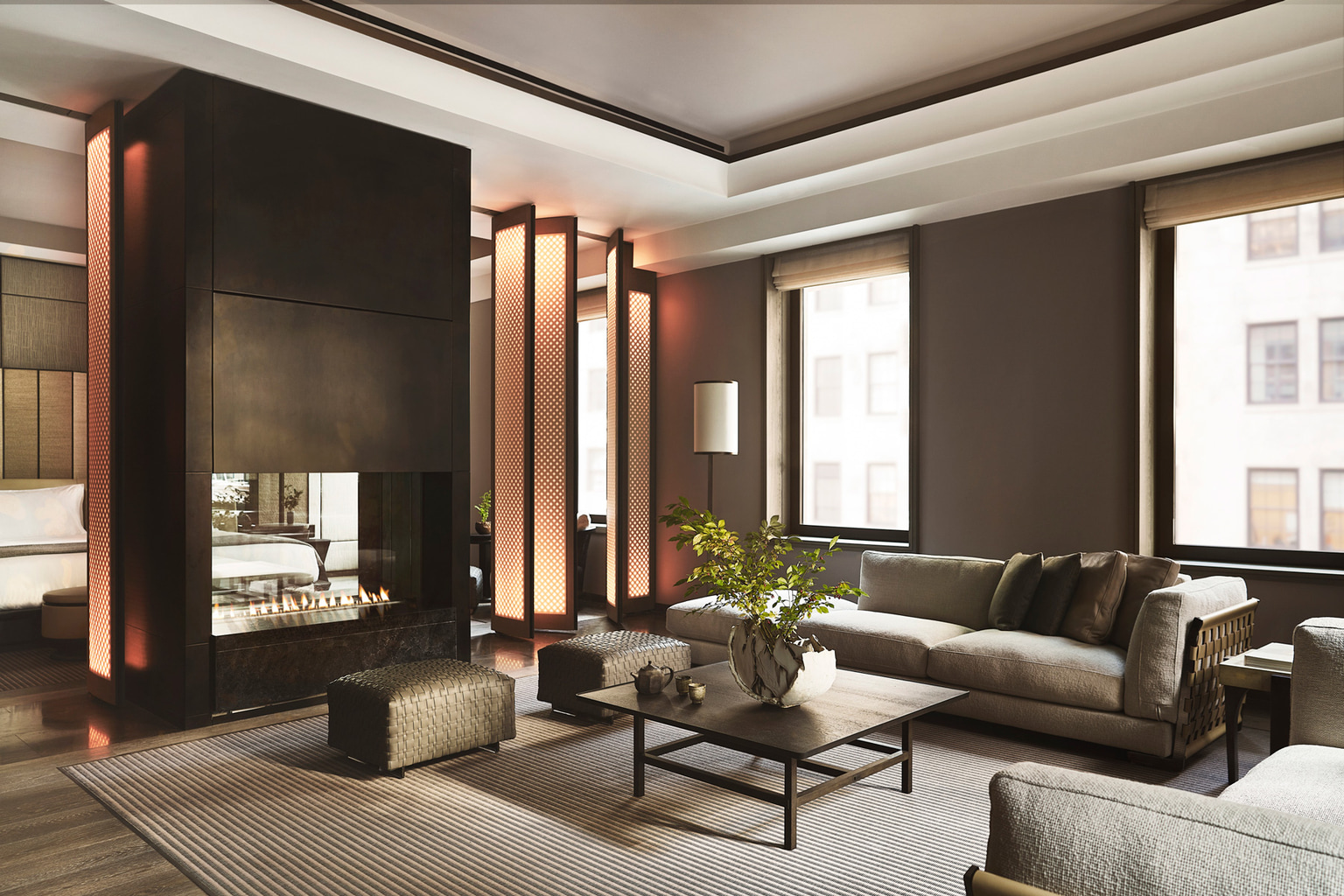 Jean-Michel Gathy on Designing for Life

Otemachi, the long-standing downtown business district of Tokyo, is currently playing host to a number of the capital’s most opulent luxury hotels. One of the standouts is the Four Seasons Hotel Tokyo at Otemachi, an aesthetically stunning practice in peerless interior design headed by principal designer at design studio Denniston, the Belgian Jean-Michel Gathy.

The Otemachi residence, established in 2020, didn’t have the easiest of beginnings — opening during the first year of the pandemic. On recent evidence, though, it’s fair to say it’s gaining some serious and well-deserved traction with the city’s legion of luxury hotel connoisseurs. With sleek and curated Italian brunches served on its huge terrace boasting views overlooking the Imperial Palace and Hibiya Park, Est — a gorgeous one-star Michelin French restaurant and one of the capital’s most coveted cocktail bars VIRTÙ, it’s single-handedly transformed Tokyo’s luxury hotel market.

The Kuala Lumpur-based Denniston headed by Gathy is responsible for some of the world’s most sophisticated design projects including Aman New York, Four Seasons Bangkok and One&Only Portonovi in Montenegro. Gathy’s conceptual fusion of east meets west for Four Seasons Hotel Tokyo at Otemachi is apparent from the off with an authentic Japanese red-orange lacquer box featuring solid timber panels acting as the mise-en-scène to the hotel’s entrance. A quick and ear-popping journey, on the elevator, to the 39th floor reveals the unforgettable reception lobby, where an extraordinary view is revealed through a glass curtain wall fronted by a rock installation on a shallow pond is, in some ways, reminiscent of Kyoto’s iconic Zen rock garden at Ryoanji Temple.

In an interview with Sleeper magazine, Gathy says, “To truly respect the tradition and interpret the tranquility of Japan, the water feature serves as a buffer area to deflect guests’ eyeballs as it may be considered as discourteous to look straight down into the Imperial Palace.”

When I speak with Gathy over the phone he describes his debut work in Tokyo, his first real project in Japan, as “understated elegance.” He mentions that there were essentially three considerations when designing Four Seasons Hotel Tokyo at Otemachi. The fact that it’s in Japan, it’s ostensibly a business hotel and that it’s the Four Seasons.

“Japanese, like other cultures, have their own rituals and values and we had to take these into consideration when working on this project. But this happens in every country,” says Gathy. “We need to be rational in the design, the rooms need to be easy to make up, flexible and catering for the client and clientele needs.” The charming Belgian designer admits that even though there were challenges while working in Japan, he’s thrilled to be back working in the Japanese capital on what he calls “Aman’s little brother hotel, Janu,” which is scheduled to be open within the next year or so at the upcoming Toranomon-Azabudai Urban Redevelopment Project. Janu will occupy the same building as the new Aman Residences, Tokyo.

According to an official statement from Japan’s leading urban landscape developer Mori Building Co., Ltd., “it will partner with Aman, the operator of diverse world-class luxury hotels and resorts, in the Toranomon-Azabudai Urban Redevelopment Project, a massive urban renewal undertaking that will revitalize a large area of central Tokyo when completed in 2023. The two main outcomes of the partnership will be the branded residence Aman Residences, Tokyo and luxury hotel Janu Tokyo, Aman’s sister brand, marking the debut of the Janu brand in Japan.”

Gathy comments that he has been working with the Aman group for years now on an array of international luxury hotel developments and sees Janu as sharing similar values to Aman and having a lively and youthful atmosphere.

The accomplished designer speaks of the challenges of working in Japan with a detached insouciance. “There are challenges with every project and in every country,” says Gathy. “Perhaps the biggest challenges in Japan were the discussions about materials due to earthquake resistance. Also, there were a lot of changes from the initial concept so, perhaps, it can, in some cases, lose some of its authenticity.” When designing Four Seasons Hotel Tokyo at Otemachi, Gathy talks with a real effervescence about making references to Japanese art throughout the complex as well as only using Japanese artists for the artwork on display. He uses ikebana as a welcoming symbol in addition to representing an underlying respect for Japanese aesthetics and culture in every area of the hotel.

Although Gathy’s first forays into Japan are recent and untouched, an inspection of his work at Four Seasons Hotel Tokyo at Otemachi exposes a great artisanship involved, a delicate, nuanced and profound touch of craftsmanship while paying homage to Japan and its far-reaching legacy of design and exemplary hospitality.