Sushi chef Daisuke Shimazaki is renowned for serving classic Edomae nigirizushi in an inviting and comfortable environment at Sushi Yuu, a second-generation restaurant on a quiet residential backstreet in Nishi-Azabu. Authentic Edomae sushi is defined by bite-sized pieces of vinegared rice topped with seafood sourced directly from Tokyo Bay. Shimazaki’s style of sushi is simple, following the traditional methods involved in this particular dish that originated in the capital centuries ago.

The kanji for Yuu comes from the name of Shimazaki’s grandfather, Isamu, who passed away about the time his father opened Sushi Yuu. Behind the counter at Sushi Yuu is a photo of Shimazaki’s father, Shojiro, who has also since passed away. The shop initially opened in Kameari in 1972 and then moved again to Roppongi Dori in 1978. 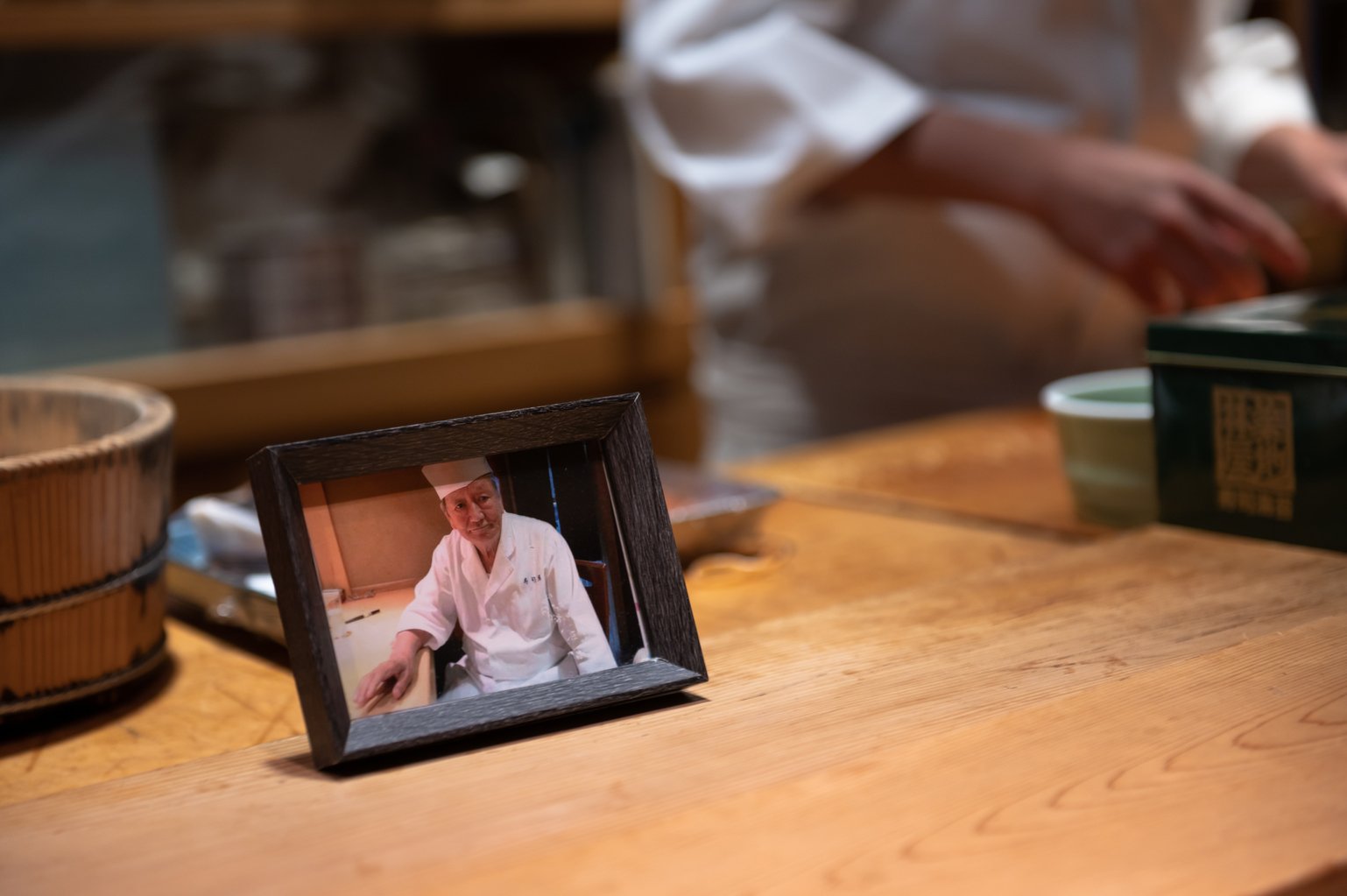 Sushi Yuu relocated to its current location, in Nishi-Azabu, in 2010. Customers, at first, had a difficult time finding it. “When we opened, smartphones with maps helped diners find the restaurant,” says a laughing Shimazaki. A white lamp box on the street with Sushi Yuu written in kanji marks the wooden gate entrance. To enter, diners push a heavy sliding antique kura door with a sakura-shaped metal keyhole.

Architect Sumio Ishikawa designed the space which has a grand and smooth L-shaped hinoki cypress counter with 10 to 11 seats, down from 14 in pre-coronavirus days. There is a private room on the second floor that seats up to 10. Ishikawa incorporated historic pieces into the restaurant, some dating back about 100 years. Behind the counter, for example, is a kumiko (woodwork made without using nails) screen and timber beams traverse the ceiling. Both add warmth to the interior. The omakase meal starts with otsumami (small dishes) such as grilled himono, the technique for air-drying seafood. The Pacific mackerel, on the menu on this particular occasion, is fileted and air-dried on the rooftop. The himono process gives the fish a rich texture. This time of year, buri daikon, a classic dish of fatty yellowtail simmered with tender daikon and garnished with an aromatic yuzu peel, is served in a delicate broth. Both of these dishes are classic comfort foods and a thoughtful start to the evening. Shimazaki serves one sake and one white wine. The food-friendly pours are a dry sake from Michisakari, a 250-year-old brewery in Gifu and Plantagenet Chardonnay from Australia.

Edomae nigirizushi is based on seafood from Tokyo Bay so it’s natural to begin with hirame (flounder) and sumiika (cuttlefish), both from Takeoka Port in Chiba Prefecture. The flounder has a rich texture showcasing its freshness. The cuttlefish is smooth and inherently sweet. Each sushi piece is seasoned with salt or soy sauce, or in the case of the eel, a sweet sauce. The kuruma ebi (Japanese tiger prawn), however, is caught in the wild, which is a rarity. The size of the vinegared rice is on the smaller side so it is easy to eat in one bite. Gotemba wasabi from Shizuoka accents the sushi with a hint of herbaceous spice.

Shimazaki is kept busy slicing seafood for take-away orders. Nigiri and makizushi are neatly packed into a box divided by bamboo leaves. Throughout the meal Shimazaki is gregarious, sharing stories about his father, seafood and his hobbies. The acclaimed chef speaks English, Russian and Italian, putting many customers at ease. One of his customers invited him to a house party and he found himself the only Japanese person among 40 guests and he felt so embarrassed that he couldn’t communicate that he started studying English. Shimazaki studied veterinary sciences in college but after graduating started working with his father at Sushi Yuu. Tuna lovers will have a great time tasting three cuts of maguro (tuna). Shimazaki sources it from Hitcho, one of Toyosu Market’s famous tuna vendors. On this particular evening, the bluefin was sourced from Shiogama in Miyagi, a port known for its tuna harvest. The akami (leanest cut of tuna) is soft and meaty, while the medium fatty chutoro melts in your mouth like butter. The ootoro is truly fatty and rich, but not cloying. One of Shimazaki’s signature sushi is the aburi ootoro, a seared fatty tuna that could be mistaken for grilled wagyu beef.

Gari, homemade from young ginger root, is cut into thick slices in an unorthodox but sublime twist to a traditional palate cleanser. The thickness makes it a much needed crunchy refresher after the fatty tuna.

Shimazaki also creates a distinctive vegetable sushi of kaiware kobujime — daikon sprouts marinated between slices of kombu (kelp) adding natural umami. It is served with a dusting of smoked skipjack tuna flakes. It’s a fascinating and vibrant morsel that dates back to his father’s time behind the counter.

A simple sprinkle of salt accents Hokkaido uni (sea urchin), served without the usual nori wrapped around the rice gunkan-style (where nori is wrapped around the vinegared rice to make it look like a battleship) so that the briny sweetness of the sea urchin can shine. Soy-marinated ikura (salmon roe) explodes in your mouth. Anago (sea eel) is simmered until tender and then seared just before serving and glazed with a sweet soy sauce tsume. The sushi course ends with tuna rolls mixed with takuan (pickled radish) or leeks and a sweet tamagoyaki omelet. The culinary coda comes in the form of a simple miso soup of leeks, mitsuba (herb-like celery leaves) and a matcha custard made by Shimazaki’s mother. 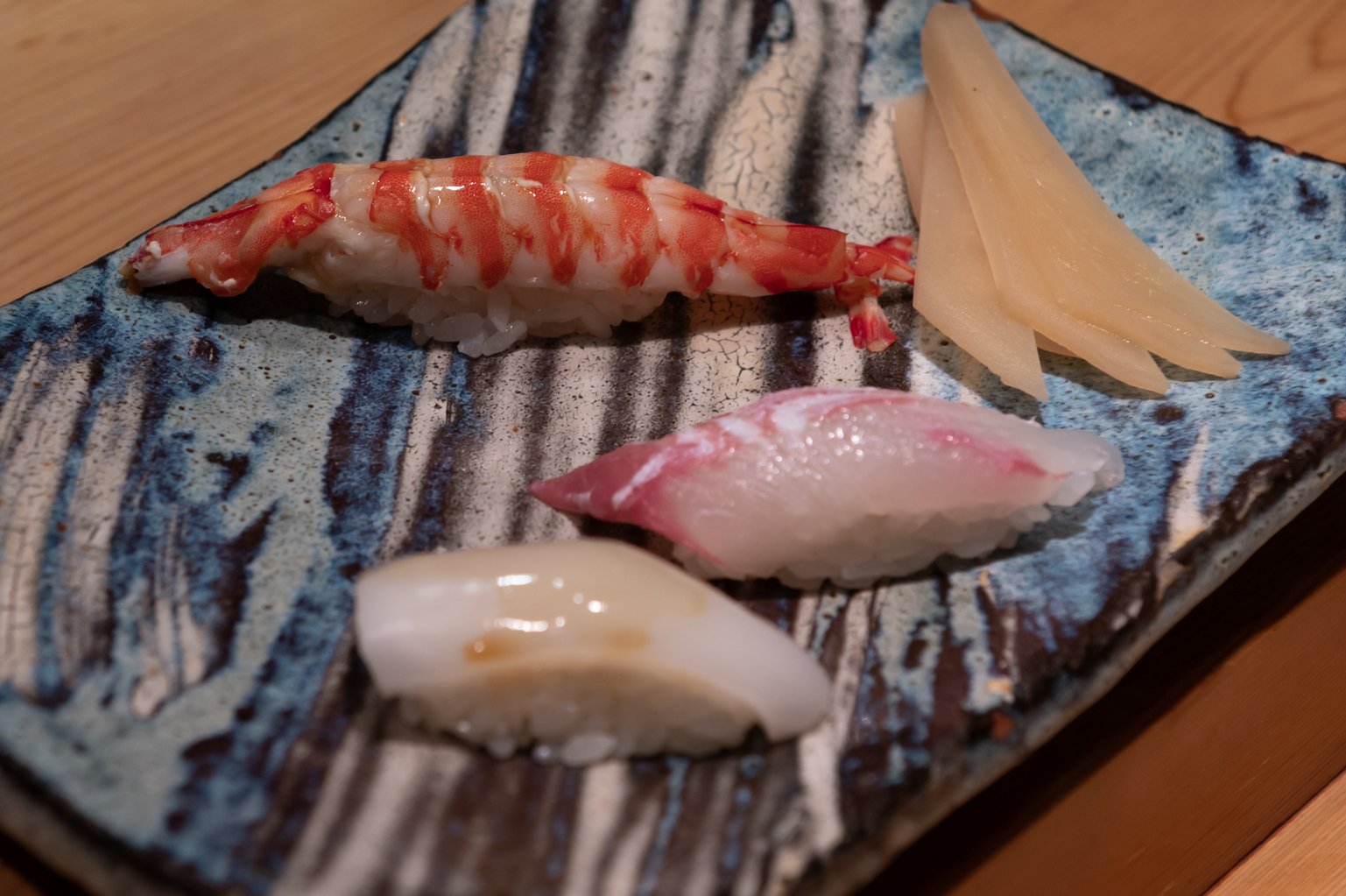 Shimazaki’s Instagram is filled with pictures of his visits to Toyosu Market, where he goes daily, as well as his hobbies such as fishing, motorcycling, skiing and spending time with his family. He also shares photos of his young son peeking into the refrigerator at the aforementioned Hitcho tuna vendor. Perhaps, one day, he will be the next generation of sushi chefs to take on the mantle.

Budget ¥20,000 for dinner with drinks. Delivery is available via the online gourmet delivery company Food-e. The chef also prepares take-away boxes for ¥5,000 or ¥10,000. Sushi this simple expresses the beauty and freshness of the ingredients involved.

Shimazaki’s skills when preparing the rice and expertly slicing the seafood create trust and a bond between chef and diners who automatically feel welcome from the moment they arrive. Sushi Yuu is ultimately a simple counter where people can feel at home while enjoying traditional Edomae sushi in the heart of the city that invented it.