Described by The Cut as “the most famous woman in Japan,” the chic and stylish Kiko Mizuhara is sometimes perceived as a cool character. During TW’s interview with the 31-year-old model, actor and entrepreneur, however, we saw a different side to her. Warm, amiable and extremely talkative, she spoke in great detail about her early years modeling, her career in film and what it felt like seeing celebrities like Beyoncé and Rihanna wearing her designs.

Born in Dallas, Texas to a Zainichi Korean mother and an American father, Mizuhara moved to Japan when she was just two. Ten years later, her mother asked her if she wanted to audition to model for the monthly teen fashion magazine Seventeen. The then 12-year-old decided to go for it and was subsequently chosen as Ms. Seventeen, earning a three-year contract.

“I didn’t feel any pressure,” says Mizuhara. “I was only a kid, so it was more fun than anything. As I didn’t have any management, my mom did the scheduling. I took the train from Kobe to Tokyo on Friday and returned Sunday night. It felt like I was in a school club or something. I wasn’t really serious about it and consequently was often called out at shoots. Editorial staff would pull me to the side and tell me to act more like the other models on set.” Top with Belt, Boots denim, Sunglasses, all by DIESEL(DIESEL JAPAN)

Despite this casual approach to modeling, Mizuhara would go on to become the country’s catwalk queen. At 16, she left home, heading to Tokyo to further her career. She soon signed a contract to become an exclusive model with ViVi, one of Asia’s top fashion magazines. A regular runway model for Tokyo Girls Collection, it wasn’t long before she was turning heads outside Japan and in 2014, made her international catwalk debut. Since then, Mizuhara has worked in all the major fashion capitals around the globe, though admits it isn’t always as glamorous as it seems.

“I love fashion but I don’t like the industry,” she says. “A lot needs to change. It’s divided and judgmental. At international fashion shows, organizers often choose celebrities from certain countries to sit at the front, whereas those from other destinations aren’t allowed. I think it’s usually a subconscious decision, but it’s also rooted in prejudice and is obvious when it happens. Subsequently, when I go to a place as a model, I sometimes feel bad about myself.

“These days, diversity rules over everything,” continues Mizuhara. “That’s, of course, a good thing, yet many companies feel the need to appeal to those who expect diversity. They end up choosing people from different ethnicities just to fit the puzzle. When diversity started becoming important in the industry around five years ago, I got many job offers as a representative of Asia. In one sense I was happy, but at the same time, I was slightly put off by it as I wanted to be recognized for being myself.” Mizuhara does enjoy visiting foreign countries, just not so much for work. Her favorite destination is Barcelona, particularly for the art and food culture. She also loves the attitude of the people there as they seem to “live for the moment,” rather than spend too much time on their phones. From a professional perspective, there have been some memorable experiences as well. Her personal highlight came around 10 years ago when she was photographed by Karl Lagerfeld, one of the most celebrated designers of the 20th century. He put together a photo collection, shot in Paris, titled The Little Black Jacket in which famous people wore Chanel’s iconic black jacket.

“Along with the jacket, he had me tied up in shibari bondage to represent Japan,” recalls Mizuhara. “During the shoot, everyone on set suddenly stopped and looked at the door. I’d no idea what was happening. A few seconds later, Anna Wintour walked in. It was like a dream – I was surrounded by fashion icons. Because of her schedule, she had to finish early, so they stopped my shoot and went into hers. She has a reputation for being a bitch, but took the time to come over to me and introduce herself, all while I was still in bondage and getting my photo taken by Karl Lagerfeld – it was surreal.”

Yet, for Mizuhara, modeling other people’s clothes wasn’t enough. In 2013, she collaborated with the fashion brand Opening Ceremony to design outfits for the company’s flagship store. Her “Bad Girl of the 90s” collection featured a famous pizza design worn by Beyoncé, which Mizuhara says she was “absolutely ecstatic,” to see her wear. She feels it may have been an ironic statement from the 28-time Grammy winner as Beyoncé announced she became vegan the day before. She’s not, however, the only singing sensation to have donned Mizuhara’s attire.

“Both Beyoncé and Rihanna have worn two of my outfits,” she says proudly. “I met Rihanna at the Met Gala. She’d just finished her set and approached me, telling me she knew who I was and loved my style. She still sometimes privately messages me on Instagram. She’s an icon in multiple realms and the fact that someone as important as her not only recognized me, but actually came up to me is something I’ll never forget.” 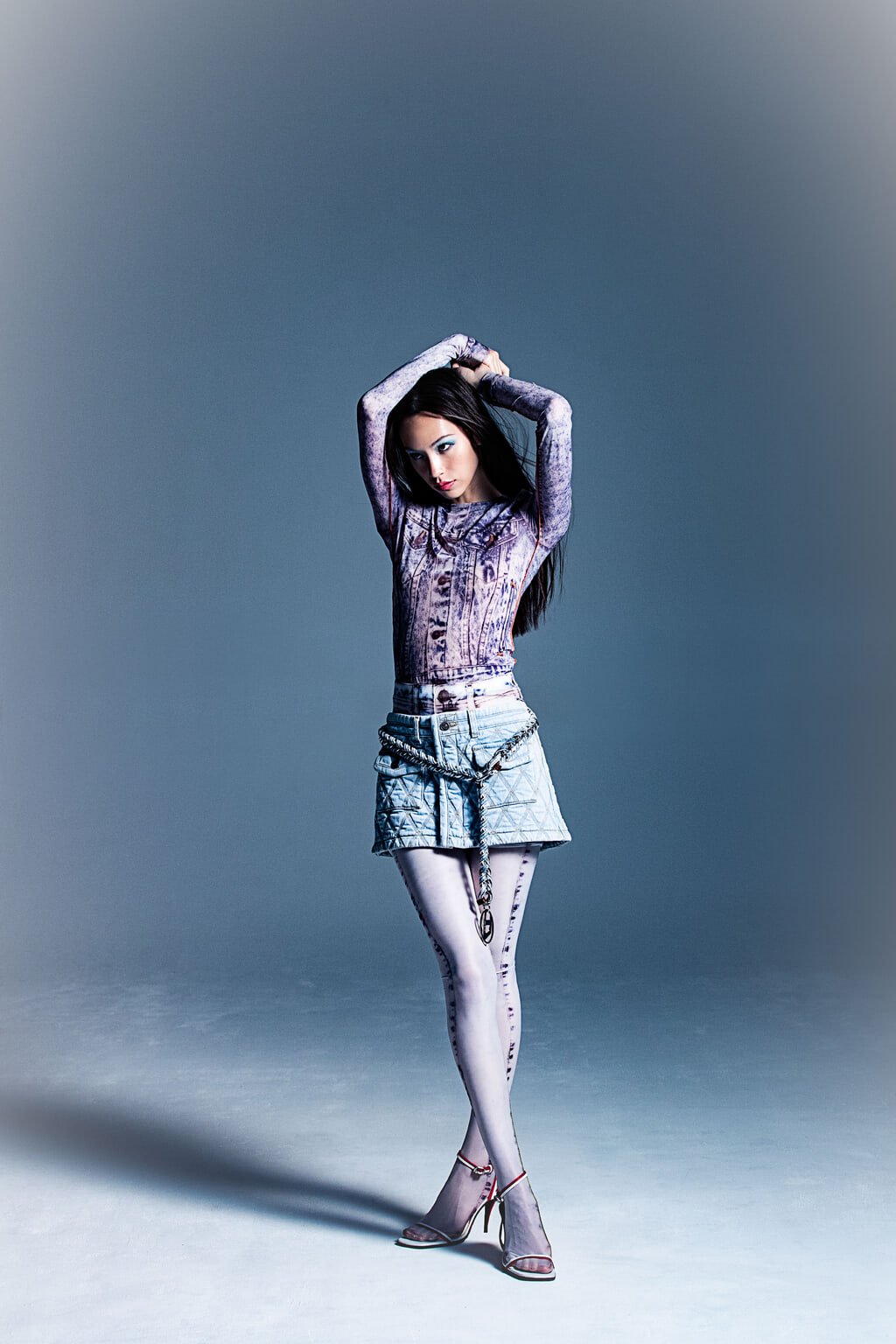 Buoyed by the success of her early collections, Mizuhara continued to design clothes for Opening Ceremony and other labels. In 2016, she founded the company, Office Kiko, which she describes as a “brand” and her own “creative space.” A year later, she launched OK, a casual clothing line at affordable prices. She says it was inspired by gyaru culture.

“I see gyaru as the punks of Japan,” comments Mizuhara. “Ganguro (a substyle of gyaru) are often misunderstood, but they and other gyaru are unique in that they don’t care what men or anyone else thinks of the way they look. That rebellious spirit is why I latched on to the culture in the way I did. I think they had much in common with hippies – the miniskirts and high platform boots made them look more powerful. That’s why I teamed up with Esperanza to make thigh-high boots my first item. It’s a popular company that makes cheap, mass-produced shoes.”

Recently, though, OK has been moving away from mass-produced items towards more sustainable, eco-friendly materials, all while keeping the original gyaru spirit. “It makes things harder but it’s what we need to do,” says Mizuhara. “There are lots of possibilities with materials such as recycled polyester and plastics as well as my personal favorites grape and orange leather. It’s fascinating discovering new things every day.” Letting Go of Nerves as an Actor

Mizuhara’s passion for clothes is evident, yet her talents spread beyond the fashion world. While she’s performed as a singer, lending her vocals to tracks by the likes of M-Flo and Towa Tei, she’s better known for her acting, having appeared in shows such as Queer Eye: We’re in Japan! and the Japanese version of The Good Wife. According to the multi-talented performer, however, it was never her intention to become an actor. She made her silver-screen debut 12 years ago in Tran Anh Hung’s poetic adaptation of Haruki Murakami‘s novel Norwegian Wood after being spotted in a magazine by someone attached to the film.

“They’d done around 100 auditions for the role of Midori and hadn’t found anyone suitable,” remembers Mizuhara. “I was invited to meet Hung as my expressions supposedly matched the character. I told him I’d never acted before but he liked my vibe and after three auditions I got the part. During filming, the director was very strict and purposefully said mean things to me. There would be 50 takes, but then he’d end up using the first one. He did it so I’d learn and improve. I was extremely nervous, but in many ways, it was the best movie I could have asked for as my first.”

Mizuhara says she has since learned to “let go” of her nerves which has led to more polished performances. This growing confidence can be seen in recent movies such Yukiko Sode’s Aristocrats and Ryuichi Hiroki’s thriller Ride or Die. She won a Best Supporting Actress award at the Takasaki Film Festival for the former, which explores gender and class issues in contemporary Tokyo. For someone who felt they previously didn’t belong in the Japanese acting industry, receiving that kind of accolade was a major boost and encouraged her to continue with her career as an actor.

Looking ahead, Mizuhara would like to feature in productions that offer something a little different from what we’re currently seeing. “Japan used to have a plethora of artistic and creative films,” she says. “It was known around the world as a hub for cool movies, music and fashion. Nowadays, all the films pretty much fall into the same categories. They are about pain, romance or death. I think there’s more to be explored and more fun to be had. It’s not just about a lack of budget. It’s about allowing a more creative space so new talent, including foreigners and people from mixed-race backgrounds, can emerge. You see it abroad, but Japan hasn’t caught up yet. I hope it will change for the better in the future.”