If you thought the words beautiful and toilet could never go together, think again

Japan has always possessed an undeniable passion for toilets that has extended across the world. Tourists and residents alike have marveled at the country’s cleanliness and been amazed by the washlet, an electronic bidet trademarked by the world’s largest toilet manufacturer Toto Ltd.

This time, Toto advised The Nippon Foundation on a unique scheme called “The Tokyo Toilet Project.” It aims to renovate 17 of Shibuya’s communal facilities into inclusive, protected and inviting spaces for all users. They asked 16 talented architects and designers to lend their skills to the project. We look at 11 of them including Kengo Kuma, Time’s most influential architect for 2021.

Here’s a rundown of this water-jet blasting superhero team: 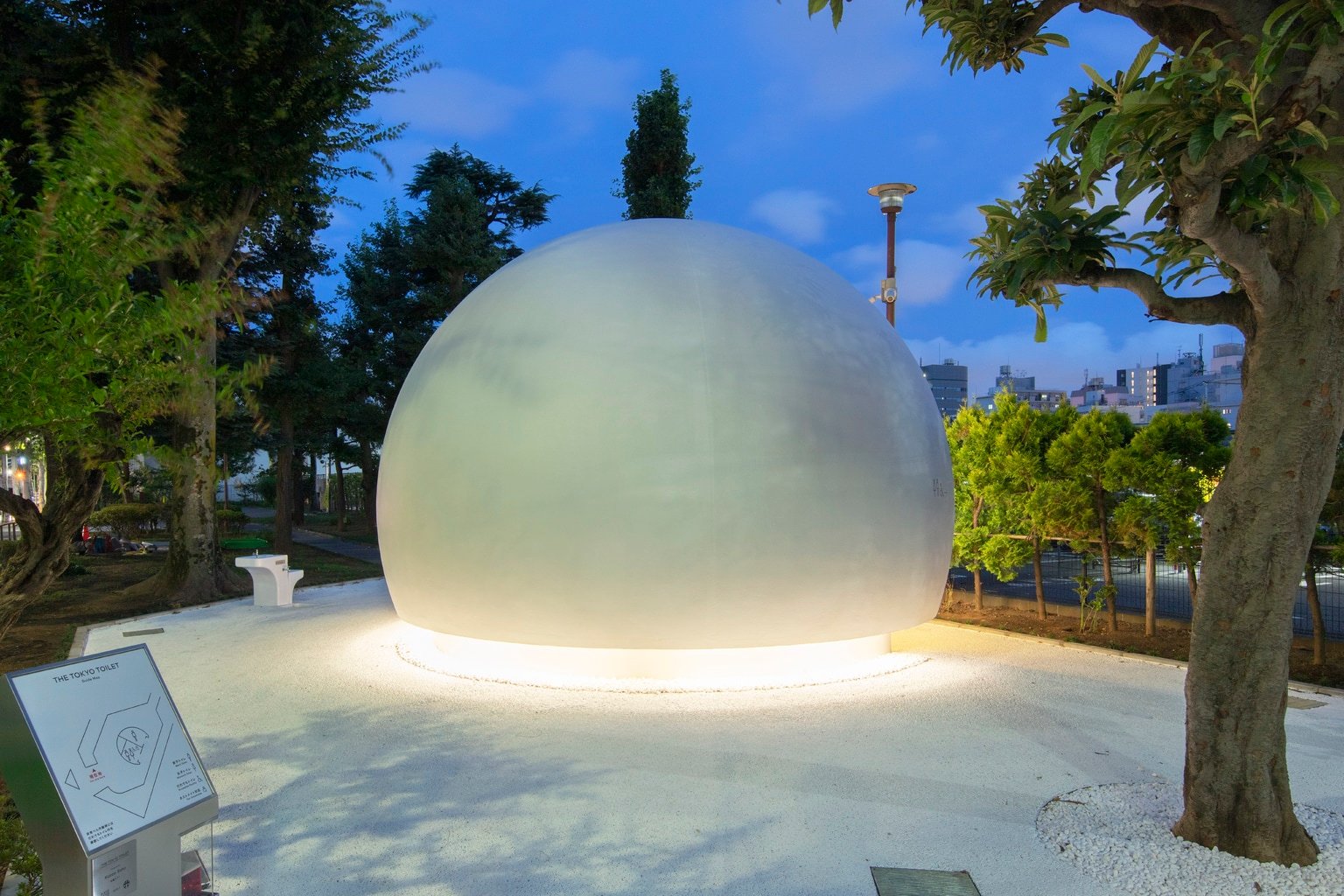 This contactless toilet experience speaks to the many of us who elbow-flush, hip-close, and in general, avoid using our hands in public bathrooms. When using the Hi Toilet, you can wash, open the door and flush by voice command alone. Creative Director Kazoo Sato and his team spent three years researching and designing it. Its circular shape is not only visually pleasing but also allows air to flow freely, eliminating unwanted smells. Placed at the foot of Yoyogi Hachiman Shrine, these fungi-looking restrooms are designed to melt into the greenery behind. Their spacious interiors with soft lighting and street-facing placement make the toilets accessible and safe for all users, including families, elders and those with an ostomy. You may barely notice this toilet as you exit Ebisu station and that’s the point. Kashiwa Sato, the man behind The National Art Center’s logo, chose this design for its clean-cut and unassuming aesthetic. It has a subtle positive effect on passersby without changing the surrounding neighborhood landscape.

Delve into the sea at Ebisu East Park, affectionately known as Octopus Park due to an eight-legged slide and meet another underwater creature rearing its bobbing head. With a sweeping roof, resting bench and centralized courtyard, Architect Fumihiko Maki wanted a space that could be utilized by all types of park visitors. From every angle, you can find beauty in this distinctively designed building. 5. A Walk in the Woods | Nabeshima Shoto Park by Kengo Kuma

These five wooden huts could easily be mistaken for modern art pieces. While the outer walls are constructed from cherry and metasequoia wood, the interior is peppered with wooden features as if you were inside a treehouse. Constructed as a universal playground fit for all needs, it is wheelchair accessible with ostomate facilities, a children’s toilet and priority access for expecting mothers and the elderly.

Check out our interview with Kengo Kuma, one of Time’s 100 influential people of 2021. 6. The House | Jingumae by NIGO

There is a history behind this bathroom’s western-inspired architecture. The House’s homely adornments, such as the picket fence, short chimneys and coffee-colored roof, were inspired by Washington Heights: a sprawling housing complex built in 1946 during the US occupation of Japan. Having grown up in Harajuku where the complex once stood, NIGO, Creative Director of Kenzo, wanted to commemorate the area’s not too distant past. A refuge placed perfectly amongst the trees of a local park. Its expansive eaves and surrounding entrance way align to erect a shelter, which is a relief when the weather is unpredictable. Two open entranceways and a latticed exterior wall allow a refreshing breeze and natural light to flow through unimpeded.

Just like a paper lantern, these unisex cubicles illuminate their surroundings and instill a feeling of calm. Sakakura was resourceful with space, creating a beautiful outside look that extends inwards with the utilization of frosted glass. The hazy silhouette of park trees can be seen from inside, creating a dream-like experience as if you were sitting on a misty moor. In the evening, the whole building lights up like a lantern.

It’s a basic human need to relieve yourself without fear and it’s something we all share, regardless of gender, race, disability or sexual orientation. As the shadows spread geometric shapes across these enflamed triangular stalls, you can see the origata (Japanese gift-wrapping) inspiration come into full view. This echoes Nao Tamura’s aim to create an inclusive and secure space that “envelopes all users.” 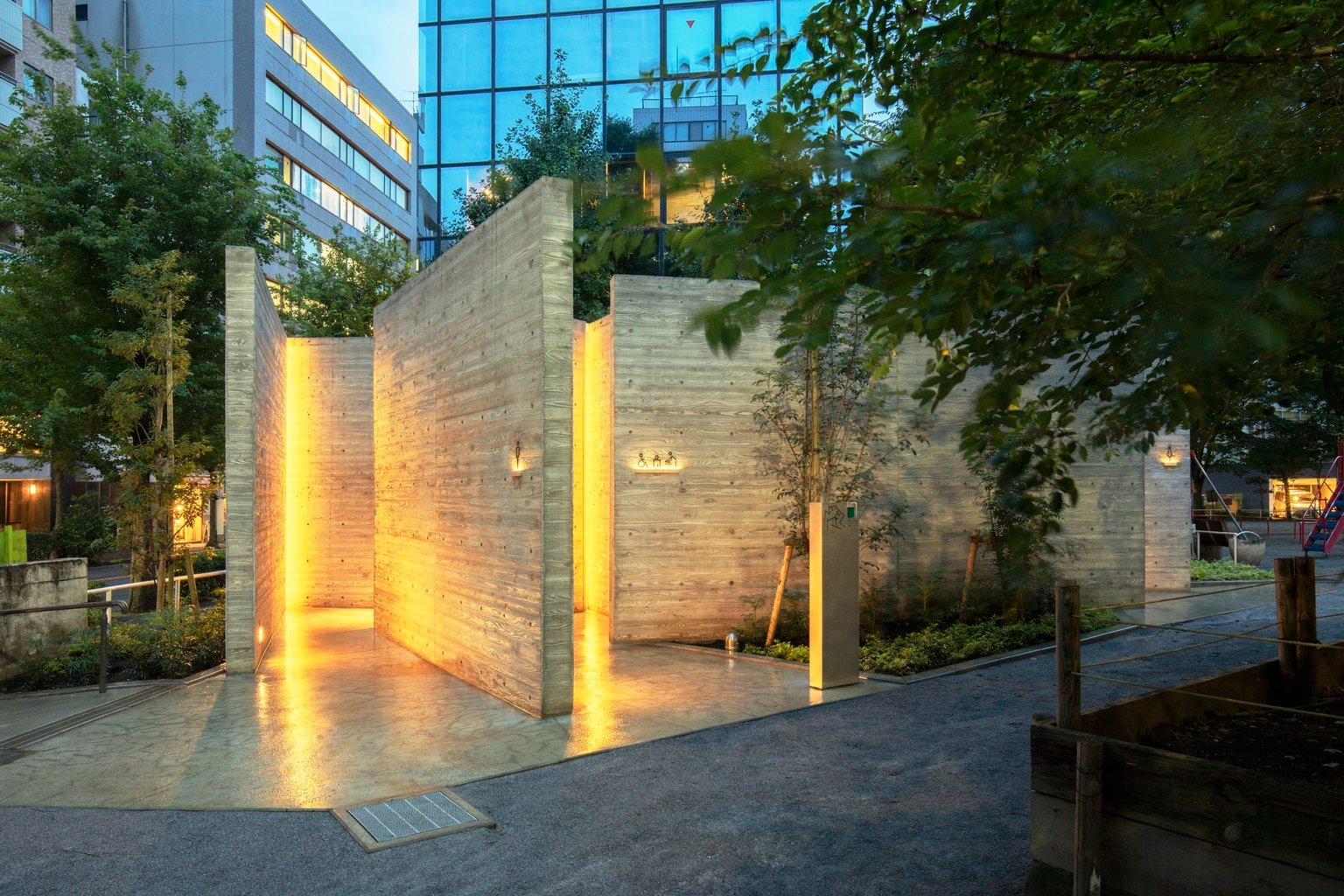 This playful labyrinth built with 15 interlocking walls fits perfectly beside the playground equipment of Ebisu Park. Built with kawaya (prehistoric Japanese toilets) in mind, the earthy color scheme and understated flooring transport you to the compacted mud huts of the Jomon period, but with the high-tech toilets of today.

These candy-colored toilets caught the eye of many when they opened in 2020. Innovative and useful, they effortlessly answer the age-old question: “Is anyone in there?” Once you turn the lock, the translucent walls of Shigeru Ban’s design become opaque, eradicating the need for that awkward test knock. When the sun goes down, the box becomes a beacon that draws you close. Just don’t forget to bolt the door.

If that’s not enough, there are still five facilities to look forward to before the end of March 2022.

All photos by Satoshi Nagare, provided by The Nippon Foundation unless otherwise noted