The (Almost) Complete Guide to Japanese Gestures, Body Language and Their Meanings

You'll never get them wrong the next time.

Foreign languages are hard. There are so many words, phrases and expressions to remember and although unconventional study methods, toilet humor, and language apps help, they will only get you so far. Most of those methods won’t necessarily help with Japanese body language or gestures either, which may be a little bit different from what you’re used to back home. However, they’re an important part of communication and so we’ve taken it upon ourselves to give you guys what may or may not be a comprehensive guide to common Japanese gestures. At the very least, we hope it will save you from some awkward misunderstandings.

Description: Raise your hand in a lying down okay-sign from below.

Description: Wiggle your glasses up and down, or if you have no glasses, simply point two fingers of one hand and slide them up and down your temple.

Meaning: Someone is smart, bookish, or has studied at a prominent university.

When and how it’s used: Usually used when talking about someone else and hearing they went to a particular university or completed something academically. “Oh, so she’s this, huh?” *wiggles glasses*

Warning: In nearby Taiwan, tapping your index and middle finger to your temple implies someone is crazy rather than smart.

Tooting Your Own Horn

Description: Curl your hand into a fist and place it against your nose.

Meaning: That guy is full of himself. Can also be used to imitate the supernatural long-nosed creature, the Tengu.

When and how it’s used: When you want to talk about someone behind their back and you want to imply they’re a bit stuck up, but you don’t want to necessarily say it. “You know Tanaka-san from the accounting department? He just bought a house and now he’s…” *fist to nose gesture*

Description: Curl one hand into a fist and rub it against the palm of your other hand in a circular motion.

Meaning: The gesture shows someone grinding sesame, which is the Japanese equivalent of polishing an apple — something that would be done by a teacher’s pet in school before they give the apple to their sensei. In the same way, polishing sesame seeds for a superior has the same suckup effect.  It implies someone is trying to brown nose or curry favor with someone else. It can be used both jokingly and maliciously.

When and how it’s used: “Oh, you did your homework and actually handed it in on time?” *rubs fist against palm in a circle motion*

The Not “It Smells” Wave

Description: Wave your hand in front of your face. Bonus points for not moving your elbow around much.

Meaning: It means no, or that something is different.

When and how it’s used: Usually used in response to something that has just been said, often accompanied by the words 「違う、違う」(“Chigau, chigau”/ “No, no.”) or 「いやいやいや」 (“Iya iya iya”, “No, no, no”). For example: “So this is your new boyfriend then?” “No, no!” *wave* (Don’t wave too emphatically or you’ll hurt the other person’s feelings, especially if they were hoping for something more.)

This one can be tricky for newcomers or first-time visitors to Japan, who often confuse it with the western “Ugh something smells bad” wave.

Description: Stretch your arm out and wave your hand towards you.

When and how it’s used: If someone wants you to come closer, this is what they’ll do. Occasionally confused with being waved away.

Point to the Nose

Description: Point to your nose with your index finger.

When and how it’s used: If someone mentions your name or asks you to do something (and you either are surprised by this or don’t want to do whatever’s being asked) then point to yourself in this manner.

Not a Pinky Promise

Description: Raise your hand with all fingers curled into a fist, except for your little finger, which should stick straight up.

When and how it’s used: If you talk about someone of a different gender too much, or introduce someone as your friend, you may get this in response. Especially effective if the receiver is already married, implying an illicit affair. The less said, the better: “So…?” *pinky point*

Description: Hold your index fingers in an x shape in front of you.

Meaning: “Don’t bring us any more drinks/food.” “Give us the check, please.”

When and how it’s used: Used as a sign to indicate you want to pay up and leave. Especially appropriate in host or hostess bars where you are billed at an hourly rate as well as for the drinks you’re ordering.

Description: Hold your hands up in a cross in front of your chest. Bonus points for a severe scowl.

Meaning: “You can’t do that.” “You can’t go through here.” “Stop whatever you are doing.”

When and how it’s used: Whenever someone is attempting to do something or go somewhere they’re not allowed to do, someone will invariably do this. It’s stronger than the “worried wave away” (not listed here) but not as forceful as a verbal “Dame!”

Alternative meaning: X-Japan fans will use this, especially for photos. The x shape will be a little bit higher up, almost covering the face.

Description: Hold a hand up and chop the air in front of you with it.

When and how it’s used: This is a go-to move for older men in crowded areas who want to make their way through a mass of people. Effective for a Moses-worthy parting of a sea of people.

Do you ever use any of these gestures yourself? Did we miss any that you think should be included? Let us know!

Looking for more ways to study Japanese? Why not learn natural gestures and real-life dialogue through Japanese Netflix shows? 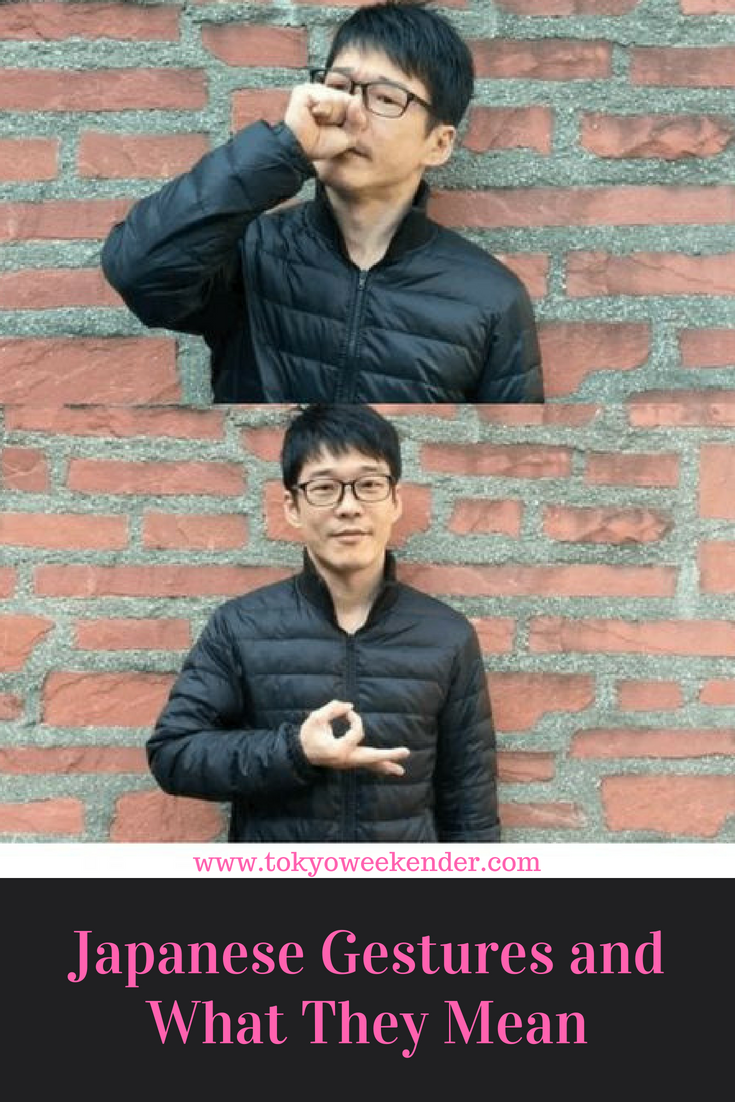