Art & Culture Music
TOP“Suddenly, My Dream Seemed Much Closer”: Rising Star Noa Talks How It All Started, and His Next Big Dreams

“Suddenly, My Dream Seemed Much Closer”: Rising Star Noa Talks How It All Started, and His Next Big Dreams

How do you gather an army of followers just a few months after making your debut in the local music scene? Ask Noa Kazama…

Twenty-year-old Noa Kazama dreamed of becoming a K-pop singer when he was young. Supporting his goals, his family moved to Korea after the Tokyo native graduated from elementary school and, there, he got his start in the music biz. Having returned to Japan a couple of years ago, he’s now carving a place for himself in the local scene, while collecting fans through his charming YouTube videos. TW caught up with the trilingual idol at Hotel Emanon in Shibuya. TW: What were your musical influences while growing up?

Noa: It was the movie High School Musical that first got me interested in music and dance when I was six. The scene that stood out for me was when Troy (Zac Efron) and his team were practicing basketball while performing. It made me realize you can do anything with music. After watching that, I listened to all kinds of genres, though I particularly loved Justin Bieber and Chris Brown. I then got into K-pop groups such as Big Bang. They were the band that made me want to be a singer in Korea.

You signed with the same talent agency as Big Bang. How did you get that opportunity?

I moved to Korea when I was 12 to pursue my dream and within a month got an audition with YG Entertainment. My mom’s friend told us about a stylist who did G-Dragon’s hair. He was my favorite member of Big Bang so it was really exciting to meet someone associated with him. While I was there, she asked if I would be interested in becoming an artist. Of course, I said yes and at that moment she called up the agency to arrange for me to take an audition. Did you feel you were ready to join such a big agency?

The plan was to spend a few years practicing and then hopefully after that things might start to happen. I hadn’t anticipated the situation developing so fast. I tried to prepare as much as possible for the audition at home, but didn’t think it would be enough. It felt like a miracle when I got the email to say I’d passed. Suddenly, my dream seemed that much closer and clearer. At that point, I felt ready.

“It made me realize you can do anything with music.”

K-pop training academies are said to be intense. How was it for you?

I went to an international school until YG told me to quit and focus on the academy. Initially they go pretty easy on you, but after around three years things got harder. The lessons went from 11 in the morning to midnight. I was practicing singing, piano and different kinds of dance routines. There were English, Korean and Chinese classes. In between times, I was trying to write songs. While it was intense, I was doing what I enjoyed most in the world. What was your overall impression of Korea?

I loved it. I was fascinated by Korean traditions and buildings like the Gyeongbokgung Palace. The people were great and the food was amazing, though I did miss Japanese snacks like Calbee Norishio (Seaweed Salt) potato chips. One of the best things about living there was how easy it was to get around because public transportation was so cheap. The biggest difficulty was the language, especially batchim (the final consonant at the end of a Korean syllable). Fortunately, I improved.

Why did you decide to come back to Japan?

I was in two minds whether to stay or return home and then One Ok Rock came to Seoul for a concert. That was the first time for me to see a Japanese band perform live. The show had a huge impact on me, especially the song, “One Way Ticket.” It made me think more deeply about becoming an artist in Tokyo and sharing music from my country to the world.

NOA’s special interview with Tokyo Weekender out now!
Please check the stockists list and go pick up a copy!https://t.co/fnNJoVEdRE pic.twitter.com/vxe8Fj2B4b

What made you go with “Lights Up” as your debut single?

I considered a few different tracks, but kept coming back to “Lights Up” as it’s probably the most memorable song of my life to date. It has an upbeat melody with a house mix that I hope will brighten people’s moods. What made it extra special is the fact that it was co-produced by my best friend, Millennium (Choi Raesung), who I’ve known since we were 12. As youngsters, we argued a lot due to having different ideas and because of that I can get different perspectives from him. It was my dream to debut with my best friend and thankfully I achieved that.

You worked with Tofubeats on your follow-up single, “Taxi.” How did that collaboration come about?

I was a big fan of his during my time in Korea. Coming back to Japan, I decided to send him a message on Instagram, along with a link to my songs. A few days later, I was in my neighborhood and happened to see him at a crosswalk. It was an amazing coincidence. I introduced myself and we ended up getting to know each other, and I eventually asked if he’d be prepared to collaborate.

What did he bring to the song?

He gave it a Tokyo vibe that was initially lacking. I originally penned the track in Korean after riding in a taxi over there. Returning home, I decided to write it in Japanese, but something wasn’t quite right. It didn’t have that feeling of being in Japan and that is what tofubeats added. I was surprised how different it sounded. I want it to give people hope that we can one day travel the world again.

“Taxi” was first played on your YouTube channel. Can you tell us about that?

I started uploading videos earlier this year. It’s a good way to showcase my music and speak about it as well. I’ve also got something called Noa’s Diary where I show people what I do in my free time. I always used to wonder how my favorite artists spent their days, so I just thought it would be a nice idea to show fans some of the things I like to do.

Can you give some examples?

I like cooking and drawing characters such as Mickey Mouse and SpongeBob. I’m not great at coming up with original artwork but I’m pretty good at replicating things. [Laughs] I also love playing and watching sports. My favorite is basketball. Kobe Bryant became my hero after I met him at Kiddy Land in Harajuku. Other than that, I enjoy going out to parks and restaurants. At home I play lots of video games like Star Wars, FIFA, Grand Theft Auto and Spiderman. I’m a big fan of Marvel characters.

What are your future goals?

I’m preparing for my first album. With my next song, I want to show a new side of me. I’ve kind of decided what it will be, but there’s no release date yet. Thinking further ahead, I hope to start doing concerts and one day appear at the Mnet Asian Music Awards (MAMA). I’d also like to do more collaborations. The ultimate would be to work with Chris Brown. Maybe one day. 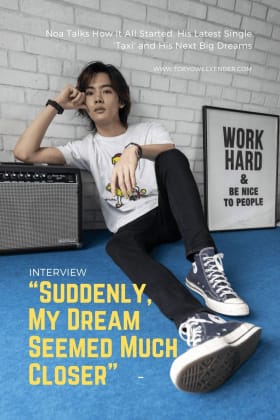