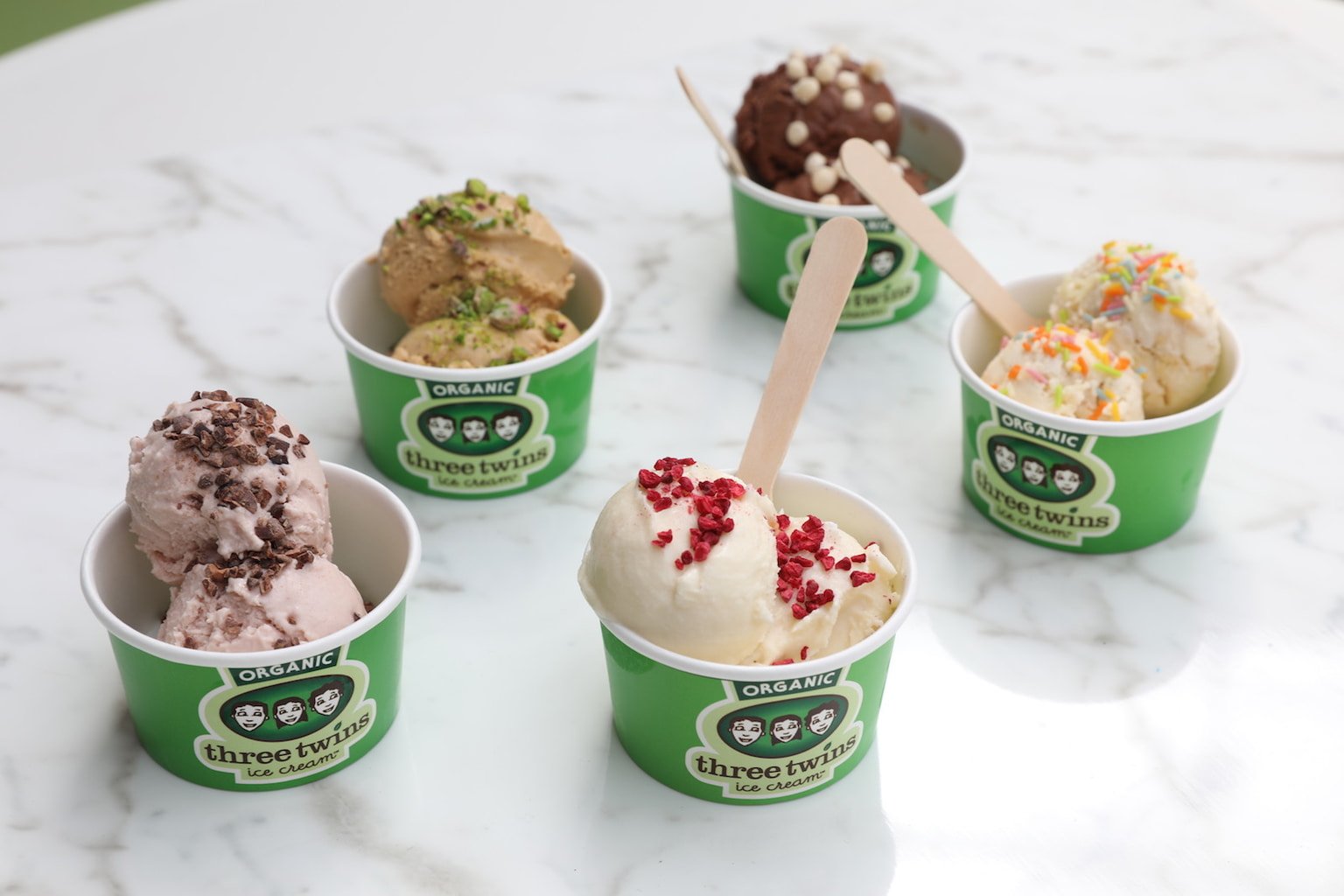 Four Healthy Ice Cream Brands You Should Try in Tokyo

These are some of THE best vegan and organic ice cream brands in the city!

If you can’t live without ice cream, but you’re trying to adopt healthier eating habits, then you’ll be happy to know you can indeed enjoy the treat without the guilt. Here are four vegan, organic and/or fruit-based options to try in Tokyo this summer. 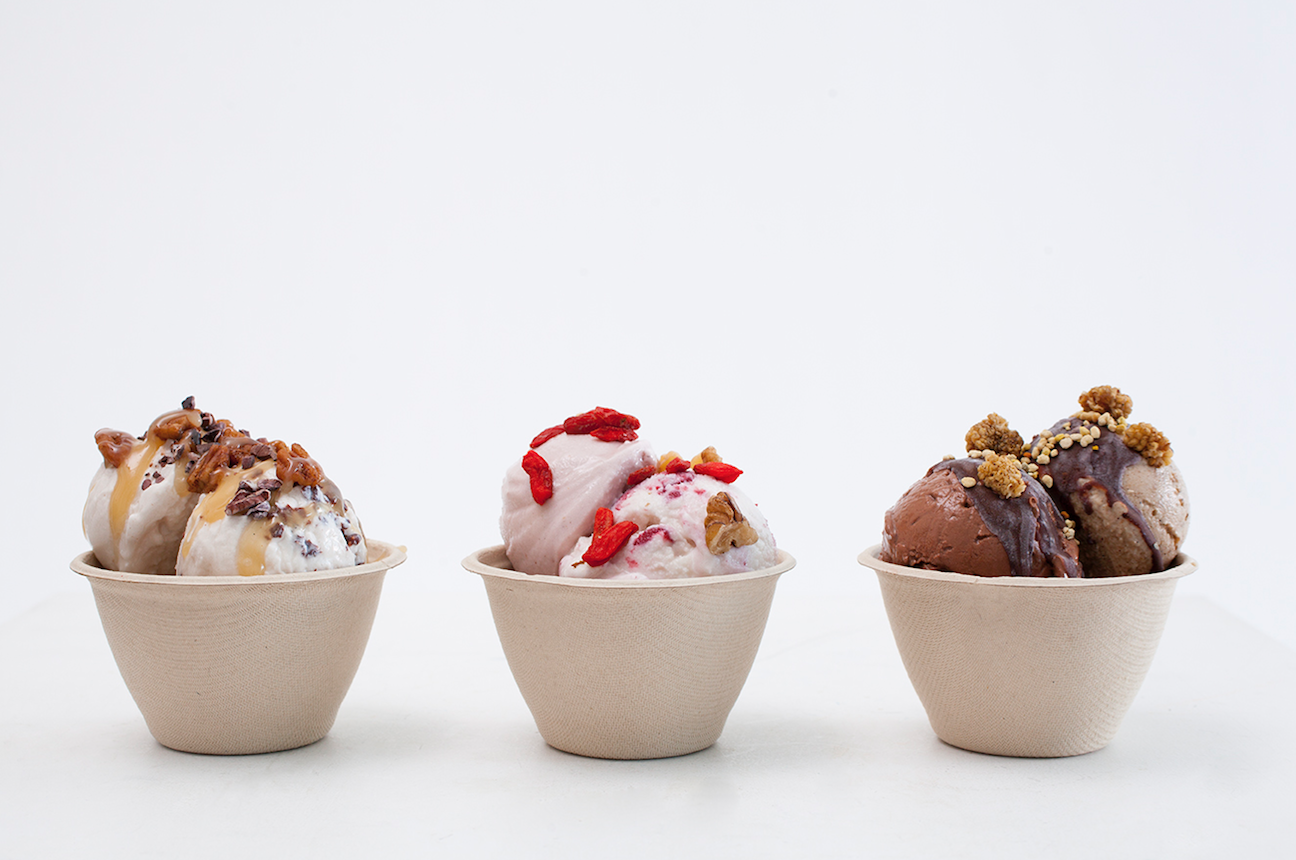 THE STORY When co-founder Kippy Miller discovered that adding raw coconut cream to her diet helped to ward off the migraine headaches she’d been suffering from, she started experimenting with using it as a base ingredient for non-dairy ice cream. In 2013, she and her business partner Max Wolf opened Kippy’s Ice Cream Shop in Venice, California, and in late 2015 their branch in Tokyo’s Sendagaya neighborhood followed.

WHY WE LOVE THEM Besides being delicious and creamy enough to pass for the real deal, Kippy’s ice cream is raw, organic, non-dairy, and sweetened with raw honey or dates. The team makes everything by hand, even draining, cracking, and shredding the organic coconuts themselves.

WHAT TO TRY If you love the taste of coconut, you’re in for a treat as any of the 11 flavors will go down well. Alternatively, go for coffee or cinnamon blends, and top with honey salted caramel sauce and spiced pecans. ¥600-¥1,000, ¥100 per topping.

THE STORY Neal Gottlieb founded Three Twins in California back in 2005 along with his twin brother, Carl, and Carl’s wife, Liz, who is also a twin, with a mission to make the world’s “most inconceivably delicious ice cream.” The trio dubbed their apartment “Three Twins” and when it came to start the ice cream company — the choice was obvious. Gottlieb brought Three Twins to Japan in March 2018, opening their first store in the trendy Daikanyama neighborhood. A second store, in Shinjuku’s Newoman shopping mall, followed later on.

WHY WE LOVE THEM Three Twins’s cups are pretty much a miracle — the milk, cream, sugar, eggs, vanilla (pretty much every single ingredient) are organically produced. There are no chemicals added, no fertilizers, no pesticides, no herbicides. For the milk, cows are never given antibiotics and are raised on organic feed. Ah, and did we forget to say that they taste heavenly? The brand has also released its Slim Twin lineup for people on low-sugar and high-protein diet who still want to enjoy rich ice cream flavors.

WHAT TO TRY The Japan store has a little over 10 flavors so far, but the brand is constantly evolving with new ideas. Opt for the signature taste Madagascar Vanilla and Sea Salted Caramel as a start — these two flavors simply never get old. For something refreshing on an especially hot summer day, try Lemon Cookie or Mint Confetti. For those in for the richer taste, the very best option would be Chocolate Orange Confetti. From ¥380 a cup, ¥1,200 per pint (473ml).

WHERE TO TRY At the brand’s flagship Daikanyama store just outside the station (Map) or their second store at Newoman (2F) in Shinjuku (Map). For more info, see here. 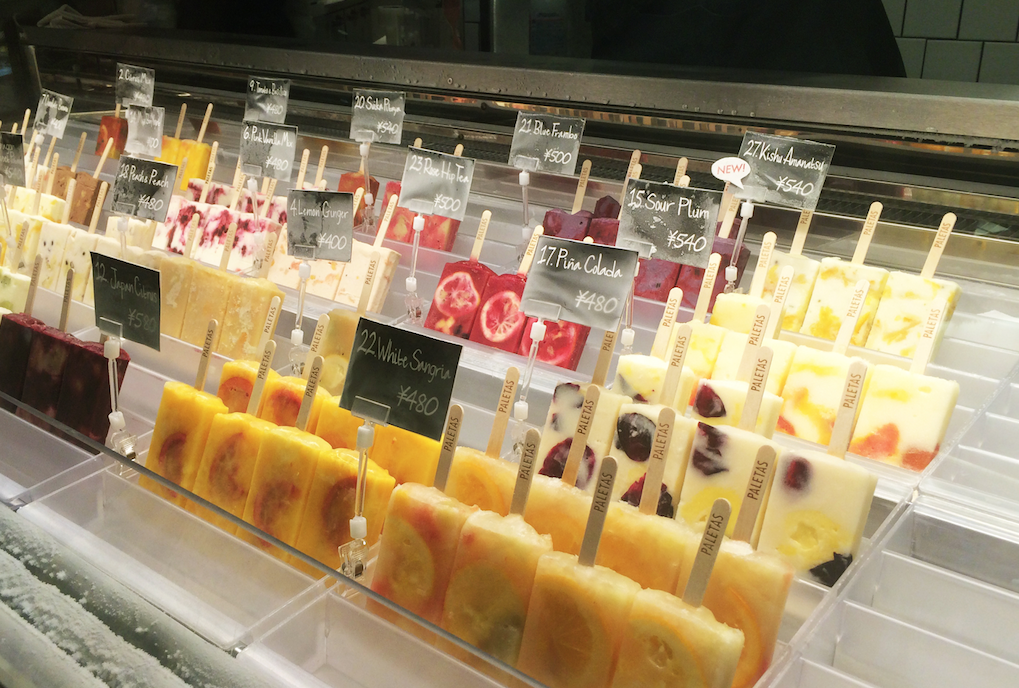 THE STORY The idea behind Paletas’ popsicles was to find a unique way to enjoy seasonal fruits and vegetables. The name and concept was inspired by Mexican ice pops, which are called paletas, and are famed for their unusual mix of light and refreshing ingredients. The brand’s first store opened in Kamakura in 2013, and they now have Tokyo branches in Roppongi and Ginza.

WHY WE LOVE THEM There are so many flavors to choose from that you could buy a different one every day of the month. The ingredients are natural and additive-free so you’re getting the real goodness of fresh fruit and veg (some flavors contain milk or yogurt, so be sure to ask if you want dairy-free). Also, they just look so darn pretty!

WHAT TO TRY We recently popped by their Tokyo Midtown branch, and we’d recommend the Rose Hip Tea or Pina Colada flavors.

WHERE TO TRY: At their Tokyo Midtown store (Map) or Ginza Six store (Map). They also have a store in Kamakura (Map). For more information, see the brand’s official website here.

THE STORY Founder Nobuo Nakagawa had no business experience in the ice cream-making industry before he launched his brand, but he had a very clear idea of what he wanted to achieve: he wanted to open an ice cream shop that would make all people smile. He knew that if he wanted to achieve this, he had to create products that would satisfy the needs of all people, including those with dietary restrictions. And so he did. He established his first store in Kyoto’s Sanjo area in 2017 and the second, Premarche Gelateria Nakameguro, in 2018 and the rest is history.

WHY WE LOVE THEM Premarche Gelateria Nakameguro offers over 40 flavors of regular milk-based gelato, dairy-free gelato, vegan sorbets, and pure vegan (no animal products, no dairy, no honey) gelato, so take your time when you visit — you might need more than 10 minutes to choose. The gelato (in any flavor) is delicious and all made from natural ingredients without additives. The sorbet is made only with fruit and sugar. You can have your ice cream in a cup or in a mochi waffle cone made from rice and you can also taste up to three flavors before you choose your favorite. We won’t go into details of how delicious this gelato is, but we’ll only tell you that it has won awards in an international competition run by the Italian Gelato Association in 2018, 2019 and 2020. This should give you a hint!

WHAT TO TRY Mount Fuji: Japanese Chestnuts — you will not even imagine that this is a dairy-free gelato. The Hokkaido Organic Shiso Sorbet, made with absolutely no animal or dairy products, but also no honey, will blow your mind, too. An absolute favorite!